Reasoning that we should explore more of the Hérault valley before our time here is over next week, our adventure yesterday afternoon took us northwest from Aniane through St. Martin de Londres to the Grotte des Demoisselles, the geology bug not quite out of our system.

The Grotte des Demoisselles is a stunning geological formation.

A short funicular railway runs up a tunnel that has been blasted through the side of the mountain; at the top you begin your guided tour of the many interconnected caves. While it’s not “spelunking” — there are stairways, guardrails and everything is very well lit — it certainly is underground, and it was quite a journey up, up, up and down, down, down the various steep inclines, tunnels, and platforms.

The guided tour, entirely in French and thus mostly beyond our grasp, seemed to concern the identification of various animal, fairies, and other shapes that had been accidentally shaped by nature out of rock; we didn’t miss much, as the scenery spoke for itself: 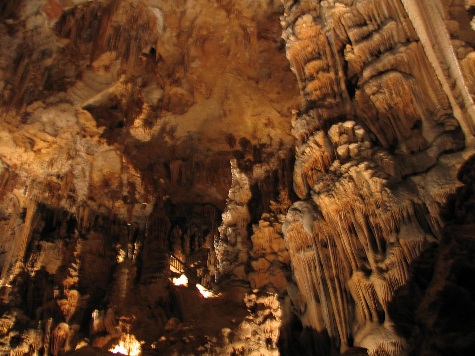 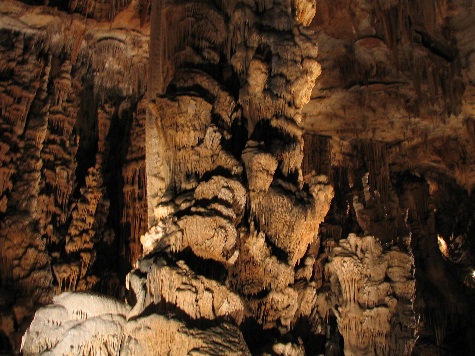 Like the Grand Canyon, photos don’t really do the place justice.

Despite the jaw-dropping geology of the place, the highlight for Oliver was a stuffed bear set up with arms raised in mid-growl placed halfway down the funicular ride back to reality: he has been talking about it non-stop for the past 24 hours, and insisted on buying a postcard of it to send to his friends Bailey and Riley.

Once out in the sunlight again, we drove a short distance north to the riverside village of Laroque for a late afternoon snack of tea (me), Perrier (Catherine) and pistachio ice cream (Oliver). Oliver, who doesn’t eat a lot of ice cream at home, has had a least a scoop or two every day we’ve been in France. We don’t know how he’s going to react to the relative nutritional puritanism of Canada.

Reasoning that we wouldn’t make it back south before a reasonable time for supper, and not wanting to tempt the cafeteria fates of the previous night, we decided to drive a little farther north to the town of Ganges for a meal.

Ganges has a pleasant children’s playground right inside its main square; I ran off to a magazine store for a minute while Catherine and Oliver explored it. When I returned I found them besieged by a gaggle of young French children very interested in who they were and why we had descended on their town seemingly out of nowhere. I was able to translate a little, and I managed to clear up any confusion about whether we were American or Canadian: although they had never heard of Canada, they were quite concerned that our proximity to the les États-unis meant that we were at war with Iraq. I assured them that this was not the case.

For supper we had various couscous-based dishes on the terrace of a restaurant beside Ganges’ indoor market. As our waitress spoke no English whatsoever, our dinner was something of an adventure, involving random decision about like things like whether agneau was goat, lamb or racoon’s eyeballs (it was lamb). Oliver ate bowl after bowl of couscous with chicken and vegetables; Catherine had couscous with the aforementioned agneau, and I had a tasty bowl of chicken, potato, tomato and eggplant. For dessert Oliver had black currant flavoured ice cream, Catherine had something that in French sounded like a “oriental pastry” and turned out to be a spring roll filled with honey and almonds, and I decided I needed to experience a “cheese course” (which was interesting: the cheese was excellent, but I’m unsure of the whole “eating cheese to finish a meal” thing).

By this time it was almost 10:00 p.m. — supper takes much longer here than we’re used to, which is not unpleasant — and we piled into the truck for the drive south, which was not without adventure of its own.

On our way up through St. Martin de Londres we had seen various barricades at the ready for what we assumed would by a May Day celebration. We were right. Except that things got underway a day early, and the entire town was taken up with a riotous April 30 celebration. So much so that the traffic on the highway through the village was subject to a déviation obligatoire.

Now in a normal village, such a déviation would not be a major problem. However as St. Martin de Londres is built into the side of a hill, there is really only one route through town to speak of, so to deviate requires travel through a complex maze of back alleys with little clearance. We were doing pretty well, we thought, until we came down a hill with a 15% grade at the bottom of which was a 15 feet metal gate surrounded by revellers cheering on an unseen game of something behind.

As the alley was only one truck wide I had no choice but to throw it into reverse and attempt a Bourne Identity-type drive backwards up the hill.

I consider myself a pretty good master of the manual transmission, but moving from a standing start up a steep grade in reverse in an unfamiliar vehicle is not something, it seems, I’m very good at: the Peugeot made all sorts of complaining noises and smells, and without a nick-of-time application of the brakes we would have ripped off the side door in a very, very low speed collision with a stone wall.

Fortunately, just as I was ready to give up, leave the truck there, and walk back to Aniane, an angel arrived in the form of a somewhat endrunkened man who knocked on the side window. I rolled it down and he told me that if I went down into the sea of hooligans, I would be able to passez à droit into a seemingly invisible alley running off to the right.

So we headed down, the hooligan sea parted, and with a couple of inches on either side we made it around the corner and onwards into the balance of the deviation, which was level, wide, and uneventful.

We arrived back in the parking lot in Aniane about 11:00 p.m. Oliver was in that post-tired state that comes after a day of adventure, ice cream, cave climbing, bear encounters and alley driving; that kind of state where when I pointed out that boulangerie and “bump your knee” sort of rhyme he broke out into ceaseless giggles.

We made our way to the house, climbed the stairs to bed, and didn’t wake up until the next morning.