Well, we made it! Yesterday was the big Race About Charlottetown, and my “Ruk City Racers” teammate Derek Martin and I made it to the finish line. Indeed we completed the required 10 of 12 tasks, answered all our trivia questions, gathered all our scavenger hunt objects, and placed somewhere around 15th out of 60. Not bad for two guys outside the 18 to 35 demographic. A few photos here; I’m sure more will follow on the Race About Charlottetown website. 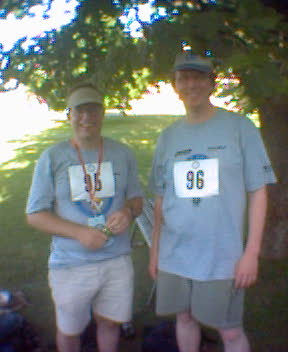 Our [almost] winning strategy was to leave the pack immediately, heading for the task that was farthest away first and then making our way back through town and up to UPEI. Derek kept me to a brisk “almost collapsing but not quite” pace, and we worked well together as a team.

Our other ace in the hole was a team back at home base, connected to us by cell phone, that was able to answer all of our obscure Charlottetown trivia questions; kudos to G., Claude and her sisters for coming through for us.

For posterity, here’s what we did, in the order we did it:

We then sprinted to the finish line, checked in, and that was that. Our rivals Dan and Nathan arrived just ahead of us, placing us, we think, 14th and 15th out of about 60 teams. There was a barbecue for racers and volunteers later in the afternoon, followed by an event for the top six teams inside the UPEI sports centre to select the winner of the grand prize; I managed to last through about half of that before exhaustion got the better of me.

The Kidney Foundation deserves a lot of credit for a well-organized event that was lots of fun. Derek reports this morning that just over $13,000 was raised. Watch for our return next year.