In this biographical note about Arthur Peters, Premier of Prince Edward Island from 1901 to 1908, is this intriguing note:

There is some debate over the exact burial location of Arthur Peters. While his name appears on a monument dedicated to those premiers buried in the Sherwood Cemetery, some insist that Peters is actually buried in St. John’s Anglican Cemetery in Summerside.

I see the seeds of a Nicolas Cage action-adventure epic buried in those words. 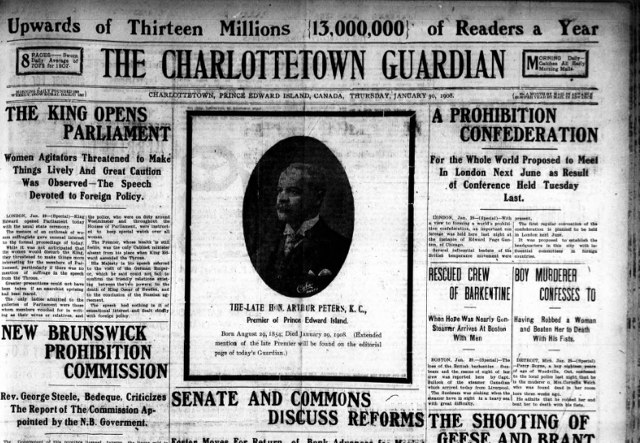 The entry for Peters in the Dictionary of Canadian Biography is an interesting capsule history of Prince Edward Island a century ago. It appears that the the issues of the day then were, with some variation, just as they are today:

From the early 1890s the province was to suffer a dramatic loss in population, a decline in the value of the output of its farms, fisheries, and manufactories, and a general economic malaise. Once the railway to the Pacific was completed and the federal government’s National Policy was adopted as the blueprint for transcontinental union, the Island was left isolated on the Atlantic margin. Consequently, politics there came to be dominated by issues that flowed from the Island’s declining role in an expanding federation and from its physical insularity: the preservation of Island representation in the dominion parliament, the negotiation of sufficient federal subsidies, and the continuing search for reliable, year-round communication with the mainland.

Peters’ life was full of interesting material: his maternal grandfather, for example, was Sir Samuel Cunard, founder of the Cunard Line; his brother Frederick was also Premier, from 1891 to 1897; in the election of 1904 Peters and his opponent Harry D. MacLean received an equal number of votes. Indeed the end of the 19th century was full of interesting political stories; witness:

In 1897 Frederick Peters made a decision which astonished his party and would ultimately affect Arthur’s political career. He resigned as premier and moved to Victoria as a law partner of Sir Charles Hibbert Tupper. Peters was succeeded as premier by Alexander Bannerman Warburton, who, in turn, stepped down to accept a judgeship. Donald Farquharson assumed office next, but he too resigned, to contest a federal seat. Arthur Peters had joined his government in 1900 as attorney general and in December 1901, after Farquharson’s resignation, he was chosen party leader. On 2 January he was asked by Lieutenant Governor Peter Adolphus McIntyre to form a government.

That’s four premiers in four years if you were keeping score.

The question remains, however, just where is Arthur Peters buried?

The Guardian of January 31, 1908 lists the interment for Arthur Peters as being at St. Peters Cemetery: