Here are the traffic statistics for this week for the Interactive Charlottetown Transit Map: 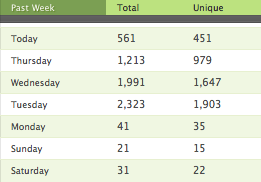 Notice that little 5,565% increase from Monday to Tuesday? That’s a direct result of the web suddenly noticing that I’d released a documented “DIY Google Maps” application:

There’s something incredibly cool about hacking together some code, trying to explain it enough so that others can figure out what you did, and then watching other people get interested in it. In Italian, no less.

There are already people releasing their variations of the map for their area.

This isn’t an earth shattering web app. But it is my first experience of the “if you explain it, they will come” phenomenon. It feels nice to pay back the endless gigabytes of others’ advice that I’ve received over the years.