I have been archiving Prince Edward Island energy load and generation data since November and I’ve created various tools, like this graph and this gauge and this mobile app to put this data in my “peripheral view,” with a goal of making myself more aware, in a visceral way, of how much electricity we’re generating and using here on the Island.

One of the things that’s surprised me is how much electricity we use here in the summertime. A frequently-offered explanation for part of the increase in overall electricity usage is the shift to electric heating; so you’d expect the summertime usage to be lower than the wintertime usage. And it is. But by much less than I would expect. Here’s a graph that shows the “peak daily load” from November 2012 to August 2013: this is the highest Island-wide electricity load, in megawatts, for each 24 hour period. 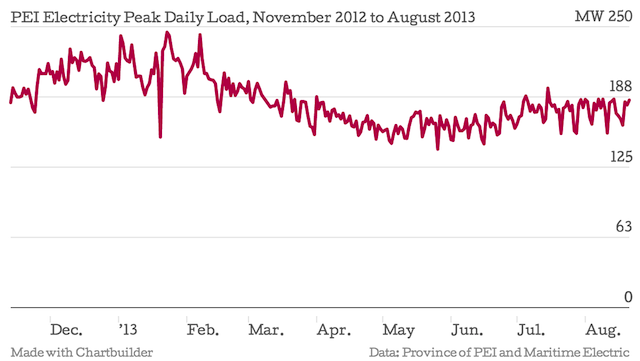 Perhaps even more interesting is a graph showing the miniumum daily load – the least amount of electricity we’re using in any given 24 hour period: 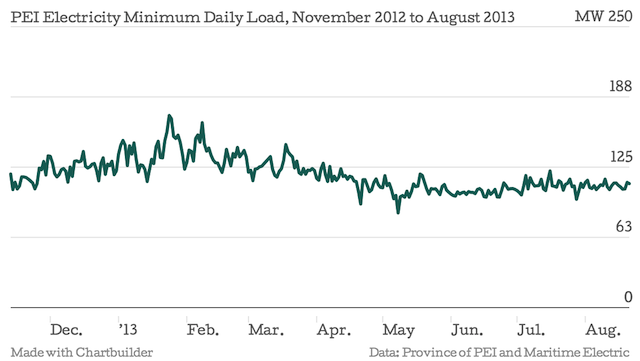 It’s a rare day when the minimum load dips below 100MW. That seems like a lot of electricity to be using a 4:00 a.m.

One of the great things about looking at the electricity portion of our energy usage is that, because it’s centrally generated and distributed, it’s easy to measure in aggregate. One of the frustrating things is that nobody – not Maritime Electric, not the Province of PEI – really knows what is using all that electricity. Of course everyone has educated gueses – perhaps it’s ground-source heat pumps or air conditioning, for example – but that’s just a best guess.

Yes, it’s air conditioning. A/C uses alot of electricity and in addition to locals there are alot of air conditioned rooms for all the tourists.

Nathan is correct. A/C is the culprit.
In warmer environs where electric heat in the winter does not generate the kind of load it does here, it’s the summer *cooling* season that utilities really struggle to supply.

We probably have all the data necessary to plot the relationship between daily high temp and electrical usage. Here’s a graph for last summer in the US.

The full post containing the above graph also states “the typical home consumes 20-30% more electricity overall on the hottest days, relative to an average summer day”:

I had read somewhere (reference unavailable as my mental librarian has gone to bed already) that it takes more energy to heat a home than it does to cool a home. I like the idea of A/C as the culprit, but I’d be interested in anyone who does whole home energy monitoring and uses both electric heat and A/C. Your data could certainly suggest that our higher winter load bears out my “winter is more energy hungry” opinion.

That said, I imagine anyone who does monitor their entire home energy usage likely has heat sources other than electricity! I really do find it puzzling that if Maritime Electric bills for all the energy that is used off its grid that is can’t classify that usage as either residential, commercial, industrial or institutional. I can’t imagine there are that many locations that produce their own industrial power in PEI. (A Chrysler plant in Windsor, Ontario that I worked at did, but that was a massive facility.)

So much data yet so little data.

Trying to find the “culprit” in just electrical loads is a bit myopic. People who shift their use from oil to electricity, which was deemed good until the HST hit, are doing the energy consumption a favour.

Air-to-air heat pumps, as opposed to ground-source heat pumps have become popular in North America and PEI over the last year. Do people who switch consume less energy overall? Heat pumps are supposed to have a 3:1 efficiency ratio over electricity (about the same as ground source from deep wells) but that is the theoretical advantage.

I have a friend in Norway who says in Scandinavia no one can afford oil and they almost universally use electric heat and heat pumps.