So my plan to attend was all but dead until my new letterpress friend Erin came on board. I met Erin through a circuitous route about a month ago when she gave me some fine paper to use on my press; by way of thanking her I gave her a tour of my tiny letterpress operation. A visit that – and letterpress is wont to do this for those of the right disposition – kindled an interest in Erin in learning the trade herself.

When Erin said she’d come along to Kentville, it was enough to push me out of my geo-dread; and that Erin could really only make the trip work if we went out and back in the same day transformed the dread into giddy anticipation at the pure inanity of spending 10 hours driving in a single day so as to be able to hang out with other printers.

I am unused to getting up so early, and especially unused to operating a motor vehicle, in the dark, so early. Which is the only excuse I can offer for how it was that I managed to get us lost even before we’d left the Island.

We headed along Rte. 2 to Hunter River, took a left onto Rte. 13, and I fully expected to emerge, 20 minutes later, in Crapaud. What my muddled brain forgot was that you have to take a right at Brookvale to achieve this. I did not. Which is how, 30 minutes later, we ended up back in North River. As if this were not shameful enough, our route actually took us right past our old house in Kingston, something I didn’t notice at all.

Chastened, I managed to follow Rte. 1 to Borden without further incident, and the rest of the trip, through New Brunswick and over the mountain to Truro where we switched driving, was uneventful. Fortunately Erin took over the driving at Truro, and was responsible for getting us from there to Kentville. Which seems like it should take 10 minutes but actually takes a couple of hours.

Almost five hours to the minute after we’d left Erin’s house we pulled into downtown Kentville, figured out where Gaspereau Press was, and walked in to the middle of the “Morning Shop Talks and Demonstrations” part of the day.

There was much fun to be had at the Wayzgoose, most of it coming from simply being able to ramble around their building, which houses a publishing house, commercial printing house and letterpress shop along with various related offshoots like paper-making equipment, and a Ludlow type-casting setup. It was all very informal – it reminded me a lot, in spirit, of MacAusland’s Woolen Mills – and as the day went on there was more and more activity, and more and more people filling up the space.

After a quick round on first arriving we set upon the “offcut paper sale,” and both spent 30 minutes poring over the various bits and bobs of paper on offer. Once I’d had a chance to set aside my ream of paper, I got a chance to meet both Andrew Steeves and Gary Dunfield, the founders, as well as several of their staff, and to watch Amos Paul Kennedy Jr. do his combination letterpress demonstration advocation: 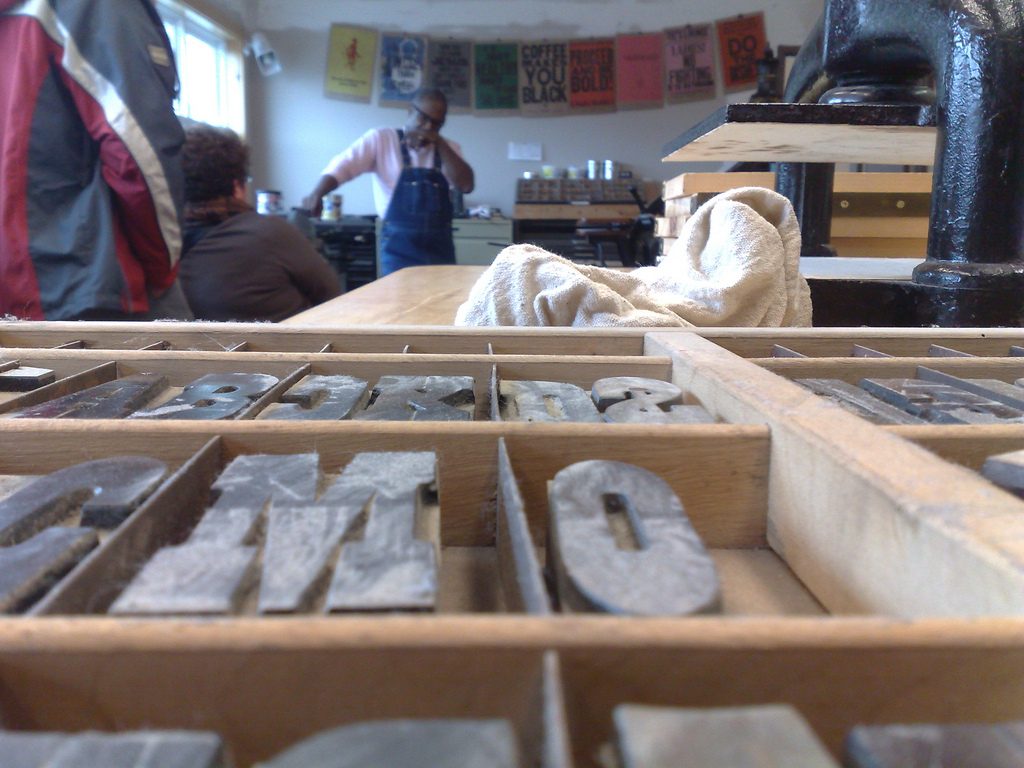 Around about noon we decided to head off for lunch before the festivities really geared up in mid-afternoon. In our semi-catatonic state we fortuitously happened upon Pizzazz Bistro, a very pleasant place run by a Bosnian and a Slovene and thus offering  ćevapčići, which I felt compelled to order (it was very good).

Still somewhat catatonic after lunch, I followed Erin’s lead and had an espresso at the nearby Café Central (very, very good coffee) and then we headed back to the Wayzgoose. 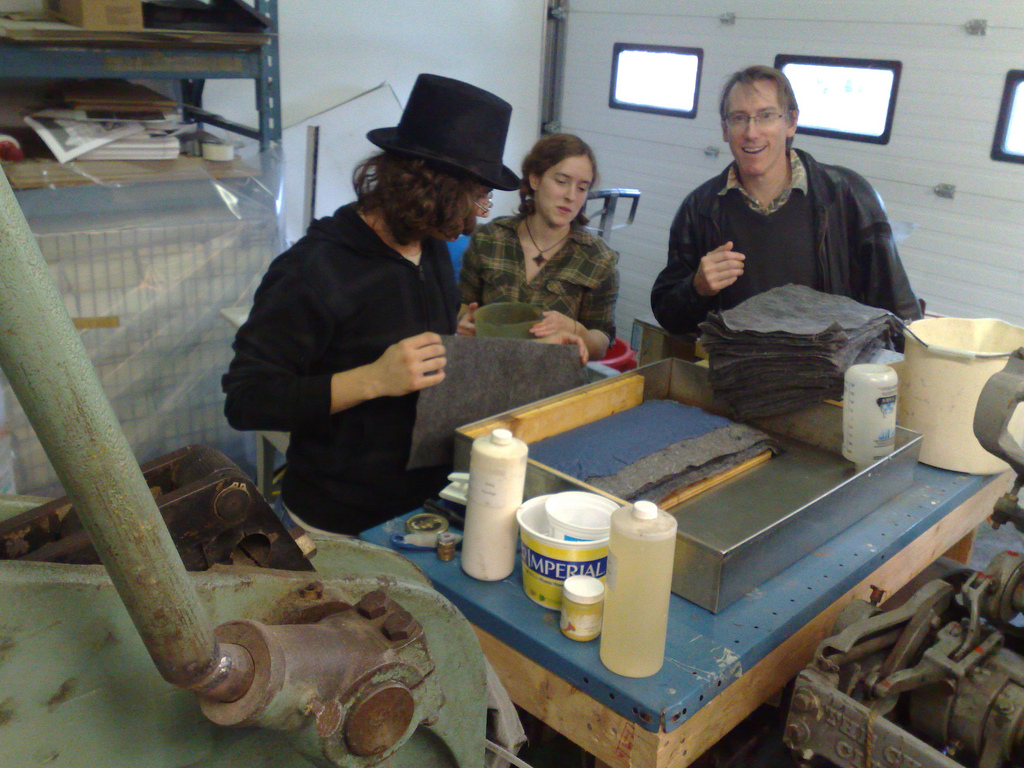 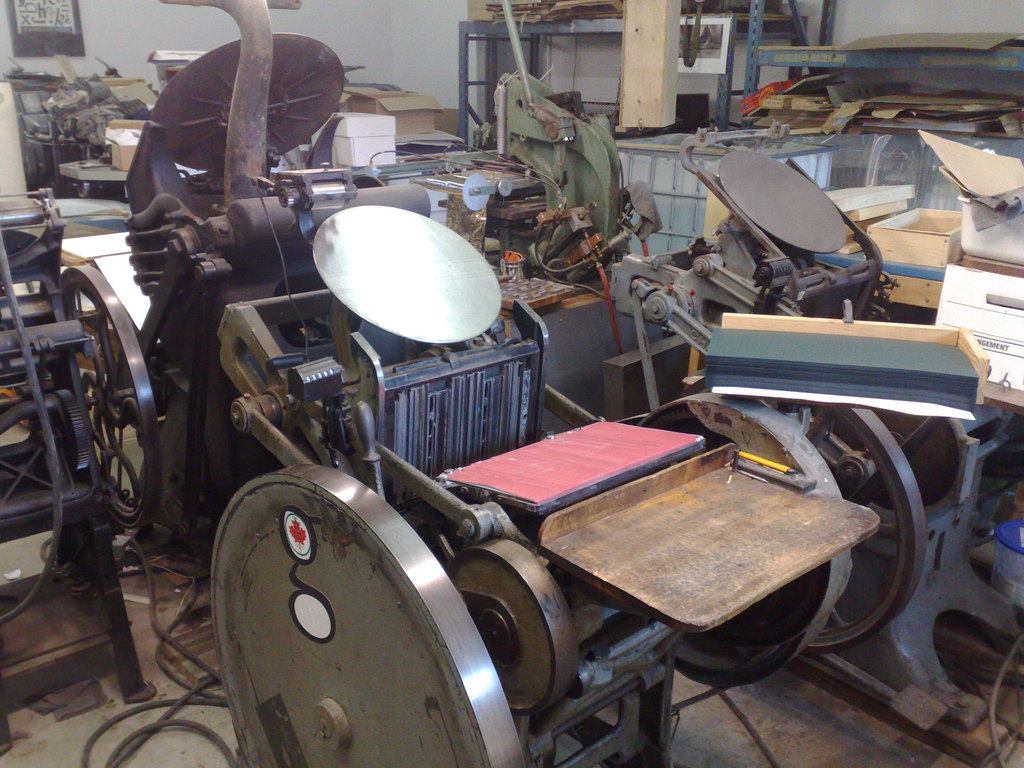 On returning there we found things much more bustling: Amos was in full form, they were casting type on the Ludlow, making paper in the back room and running prints off the Heidelberg press. Thaddeus Holownia from Sackville, NB was doing demonstrations on the second Vandercook press, and I overheard conversations amongst printers of all stripes about everything from press registration to what to do with your Linotype machine after you die.

It was all, in other words, a bit like letterpress fantasy camp.

Ever-aware that at some point we were going to turn back into pumpkins, after one last loop around the shop and a round of goodbyes and thank-yous, we piled back into the car and headed off back toward the Island.

After a brief detour into Amherst to drop off a box of books for G., and dip into Sackville for supper at the Bridge Street Café, followed by a thrilling battle through to the Confederation Bridge through (theoretically) moose-infested territory, we were back in Erin’s driveway around 10:00 p.m. and I was back at 100 Prince Street around 10:30 p.m., exhausted, but very happy to have returned from a great adventure.

I got to know that lady by way of an entire day spent together in the car. By the end, I was pretty sure I wanted to marry her.

Very glad you had a nice day, and very glad you agreed to the trip. An exhausted Erin is clearly inspired and excited by all the new things she las learned and been led to. Thank-you very much.