One of the first things to go is spontaneity.

In my 20s I would think nothing of hopping in my Datsun 510 and driving to Vancouver if the opportunity presented itself. Indeed I did just that, once.

But then mental atrophy sets in. And the need to have the breakfast cereal out of the same bowl every morning becomes increasingly important. Part of this is simply complexity: it’s harder to coordinate a small platoon of two adults, one teen and one dog into a sudden outburst of spontaneity. But there’s more to it than that: well-worn ruts, as Bembo showed us, can prove very alluring.

Which is why sometimes having someone email you, at the very last minute, with a “Hey, we’ll be in Charlottetown tonight, can we park in your driveway” can be an welcome shock to the system.

Which is exactly what happened yesterday: my friend Julie is acting as aide-de-camp for her friend Nicole while Nicole makes her way from St. John’s, Newfoundland to Montreal, stopping every 50 km to paint the Trans-Canada Highway. They are now 15 days in, having made their way across Newfoundland (twice, actually, as they had to first get to St. John’s) and Cape Breton, and opting to take the more interesting Prince Edward Island leg of the highway over the less interesting Nova Scotia one (who knew the Trans Canada had forks?).

So not only was there an unexpected injection of spontaneity into our life, but it had an right-up-my-alley artistic hook to boot.

And, so, this was the scene in our driveway this morning: 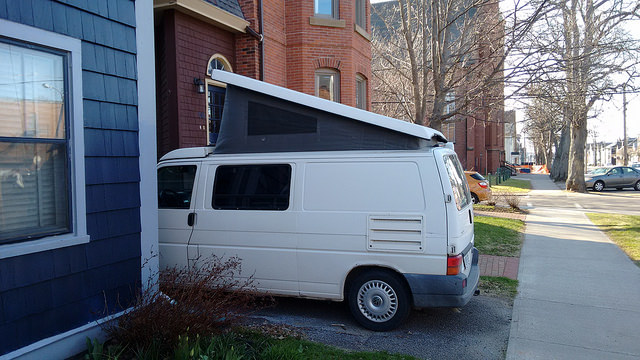 By all rights Nicole and I should know each other: we lived in Peterborough, Ontario at the same time for a number of years. Hung with a similar crowd. We even went to the same high school, albeit in different years. But, as near as I can determine, our paths never crossed. At least in a way that I can remember. (It’s also possible the we were roommates and that I’ve just completely forgotten several years of my life; this is not as far-fetched is it reads).

This morning Nicole will backtrack toward the Wood Islands ferry, stopping 18 km this side, which, added to the 32 km on the Nova Scotia side since her last painting, makes an even 50. This will put her, I reckon, in downtown Pinette. And would make PEI painting number two land somewhere around the North River causeway. And painting number three almost exactly at the end of the bridge (how convenient our kilometerage is!).

Along the way I’m hoping that she can intersect with a Guardian photographer and a CBC crew – hastily arranged late nite emails went out that the journalistic community yeomanly responded to quickly – and so Islanders will be able to learn a bit more about the project too.

In the meantime, we had a nice dollop of spontaneity land in our midst, got to renew ties with Julie, and start ties with Nicole.

As you’re making your way from Wood Islands to Borden today, watch out for painter.