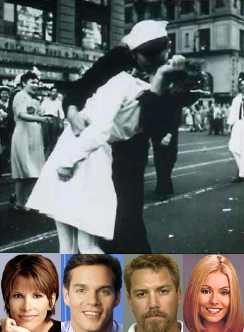 When World War Two ended, there was much dancing in the streets, merriment, etc. as well as a tendency of the masses to have end-of-war sex, which is what begat, eventually, the rise of the SUV and fast casual dining.


The end of the “War in Iraq” apparently warrants far less fanfare: as near as I can tell, the signposts that signify the end are the return to normal programming on CNN (which includes the move of Paula Zahn to the evening, the return of Daryn Kagen and Bill Hemmer from helmet-wearing duty overseas, and the well-timed rise of the Laci Peterson Story to the top of the fold), and the return of Kelly Ripa to the co-pilot seat on Live with Regis and Kelly.

“If we have no peace, it is because we have forgotten that we belong to each other.”