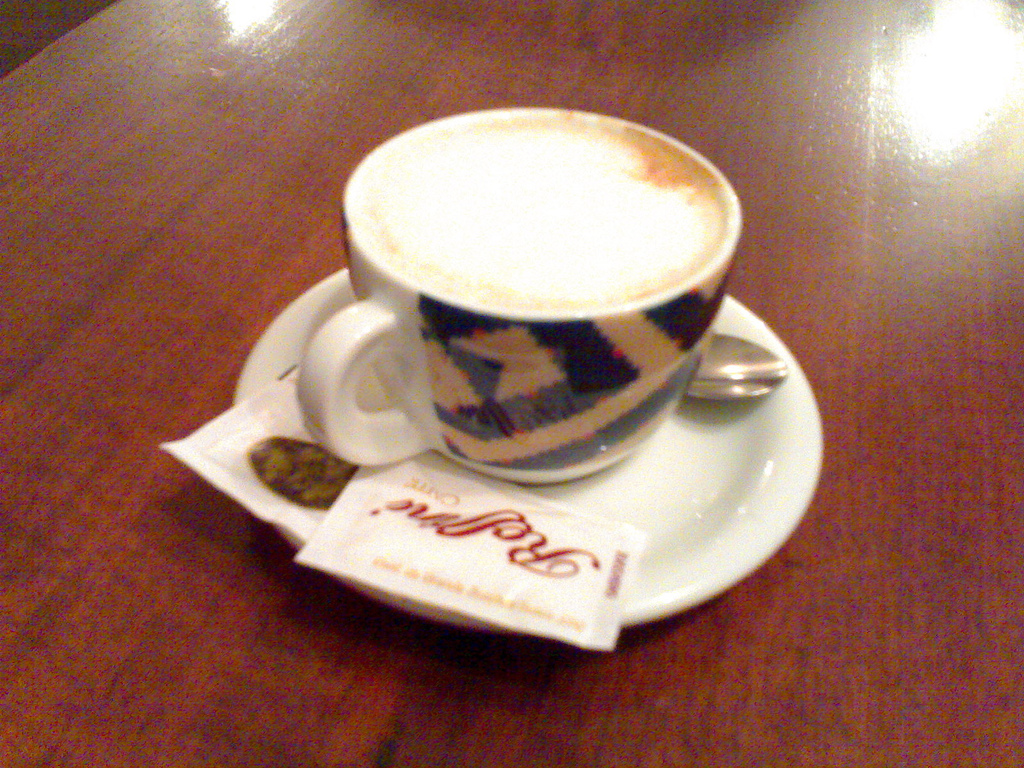 As I have written in this space before, I have made it a habit to walk up to the Telecaffe La Colletta — an exhausting journey of some 15 seconds — for a morning cappuccino (spelling hint: all of the consonants inside cappuccino are doubled except the final n).

In our family it’s always been Catherine who has worn the coffee pants. I have been content to be a tea geek and leave all the bean grinding and brewing and milk steaming to Catherine. This is partly from habit, partly because I have a conception of myself as having an addictive personality and never wanted to get hooked, and partly, frankly, because the taste, smell and culture of coffee never appealed to me.

The first cup of coffee I ever had was served to me by Ron Gaskin. Ron has the distinction of being the heppest cat I ever met: put Ron in front of a radio microphone and what you hear positively sizzles with electric heppicosity. The man has style.

There was a brief period of time when it looked like Catherine and I were going to inherit title to Ron’s apartment, an apartment on the first floor of the building on Union Street where Bill Kimball and Martha Cockshutt lived, a building that was sort of a hipness nexus in Peterborough.

And so one morning I dropped over to Ron’s place and found him in the kitchen. On the stove — a 1950s era hip stove — was a pot of coffee. Ron welcomed me in and said “how bought a cup o’ joe?”

How could I refuse — it was like Mingus asking me to sit in.

Remembering that I had never ever had a cup of coffee in my life, you can imagine that said cup of joe hit accelerated my heart by about 200% and took me to a whole other level of consciousness.

I didn’t have another cup for many years.

It’s not that Ron’s coffee wasn’t good: I simply realized that I had uncovered a route to awesome super-powers, and I wasn’t sure of my ability of manage these powers for good.

My next significant cup of coffee wasn’t until 2003 when my Dad and I landed in Ancona, Italy after taking the night ferry from Croatia. After landing at 7:00 a.m., the first place we walked into was a dock-side bar and I got all caught up in first-time-Italy excitement and ordered “una cappuccino.”

Wow, was that ever a good cup of coffee.

Since then I’ve been flirting on the edges of coffee-drinkingness. When Cynthia and I “go for coffee” at Timothy’s I often find myself ordering some highfalutin $5 “molto bene latte supremo” drink. And often what I end up with is more like snappy hot chocolate that what I was served by Ron or on the docks.

As much as I’ve encouraged Catherine’s coffee fetish — it has provided a 15 year string of Christmas gift-giving opportunities after all — I’ve also felt that the coffee-obsessed culture, whether in its Starbucks or Tim Hortons incarnations, was a little too fey for me. I could never get my head around all the roasts and milks and cups brews and the like; it all seemed like so much effort for so little pleasure.

I’m now one of them: as much as I’m uncomfortable being branded a coffee geek, as much as I’m hesitant about honing in on Catherine’s terrain, the delights of my morning cappuccino have convinced me that there’s something to all this.

And I’m afraid that I’m going to turn out to be one of these really pretentious coffee geeks, flying in green beans from the coast and roasting them myself over a custom-built propane contraption that I construct in the back yard, refusing to lower myself into the world of the large double double and generally being a prick about it all.

You have been warned.

Oh, and here’s video of my walk home from the bar here at Colletta (4.3 MB MPEG4). Apologies for the wavy video: my Nokia N70 could do with some image stabilization technology. The bar is the red door on the right as I swing around. If you listen carefully you can hear the noon bell ringing from up the hill.

You have entered a world that contains great pleasures.

Just a note (now that you’re *in*) I have been reading a lot of books about Itlatian food and the culture surrounding it. Apparently, you are not supposed to order a cappuccino after 10 in the morning. After 10, you are supposed to drink espresso or the mysterious ristretti, which are super duper high test espressos. If you order a cappaucino, you are tagged as a tourist. Which I guess you are…but just in case yoy aspire to the hippest of hipposity…that’s the rule.
You coud give Catherine a wonderful Christmas gift if you boiught her some really good Itlaian coffee beans. You’d have to hide them in your office, though. the smell is incredible.

During a 2 month stint in Spain, I had the luxury of a litte cafe next door to our apartment where I could get a Cafe con Leche or Americano (or whatever I could think of) each morning. Served by a Sylvester Stallone look-alike, with a bowtie, and all for 60euro cents. It was always the perfect temperature it seemed.

Something about a starbucks cappuccino at 4$ just isn’t the same.

I’d have forgotten about your 2nd cup if it wasn’t for hearing about your first.

Ann, I try to order my cappuccinos before noon. Several times I’ve hit the 10:00 a.m. deadline. So I’m not doing badly. And, as you say, I *am* a tourist after all.

So, you’re going for a “morning” cappuccino as the noon bell rings! You must be working on PEI time over there.

I too had my first (and second, and third) authentic Italian cappuccinos (in rapid succession) after getting off a ferry in Italy. I felt like a bit of a dufus ordering one after another, but if I recall correctly, at least it was before the official Italian 10am deadline.

YES!! My plan is working perfectly…

“…an exhausting journey of some 15 seconds

Going to your own green beans is actually pretty cheap if you’re into all the labour — for example, the “Merchants of Green Coffee” out of Toronto offer a Home Roasting membership for around $350 bucks — you get a roaster and a years worth of green beans (which apparently have an extremely long shelf life).

Do you get the Kicking Horse coffee beans from BC in PEI? Those coffees are regulars with us now and all very tree-huggy to feel good about yourself.

“(spelling hint: all of the consanants inside cappuccino are doubled except the final n).”

…And the first c.

The initial ‘c’ isn’t *inside* the word, it’s at the beginning, on the “outside.”

Nifty video. Definitely another way to live than the American suburb.

ron was alaways the coolest guy. it started at his days at lpss