Five years ago we made an impromptu summer road-trip to Prince County. It seemed like the time was ripe for another visit up west, and a combination of Catherine needing time alone to paint various things, and Oliver and I needing to spend time together before he gets flung into the maw of kindergarten sealed the deal.

So after our regular Saturday morning visit to the Charlottetown Farmer’s Market, we headed west into the Island’s hinterland.

Our first stop was Island Chocolates — I’d been lusting after one of their Factory Coffees (coffee + chocolate) since we were there last month. Oliver had a hot chocolate; as the glasses of hot chocolatey liquid look almost identical, we almost mixed them up and Oliver almost ended up downing a cup of coffee. Which would had made for a wilder afternoon. I’m willing to go out on a limb and say that the Factory Coffee is the best thing in the world, at least in the “things you can drink that are hot and involve chocolate” category. Mmmmm.

Next stop: L’Exposition agricole et Le Festival acadien de La Région Évangéline in Abram Village, the heart of the Island’s Acadian community. What with all the “tourism by demographics” going on in Charlottetown these days, it was nice to attend an event that was held for no other obvious purpose than to bring together the community for a celebration. We watched pole climbing, log rolling, horse pulling, cattle showing and music making. Oliver rode a pony and bounced inside an inflatable train. We watched the lobster-eating contest, and watched Mustang, the intelligent horse, wow the crowd with his antics. It was a great way to spend the afternoon, and an excellent reminder that there is another solitude on PEI. 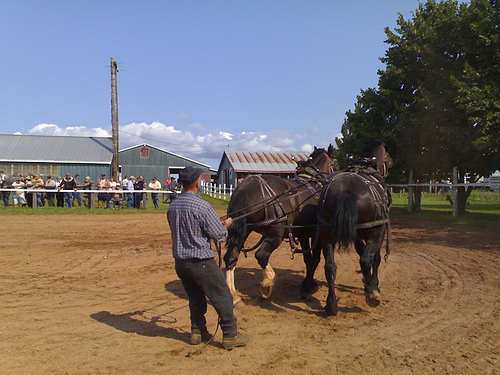 Around supper time we headed northwest to Alberton to the Northport Pier Inn, our home for the night.

The Inn is part of the “Northport Pier Development,” one of those zany ACOA-backed projects, the funding of which boggles the mind:

The fact that the restaurant next door is “closed until further notice,” that the “sea rescue interpretation centre” is little more than some panels on a wall in an old shed, and that the “eco-tourism centre” and “retail shops” are nowhere in evidence suggests that the development isn’t exactly taking off as planned.

That all said, the Northport Pier Inn is extremely pleasant: well-designed, clean, modern, and run by friendly staff. The beds were comfortable, they had Dora the Explorer on the cable TV, and the view from our room’s balcony took my breath away: 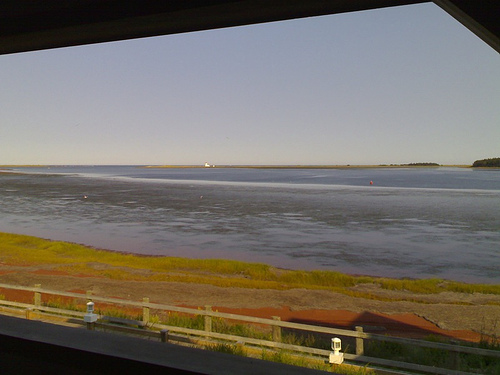 We got settled, and then headed into Alberton for dinner at the Sidewalk Café, a serviceable restaurant on the main street with a surprisingly broad dessert menu and very nice servers.

After supper it was down Rte. 12 to the Princess Pat Drive-in in Cascumpec: 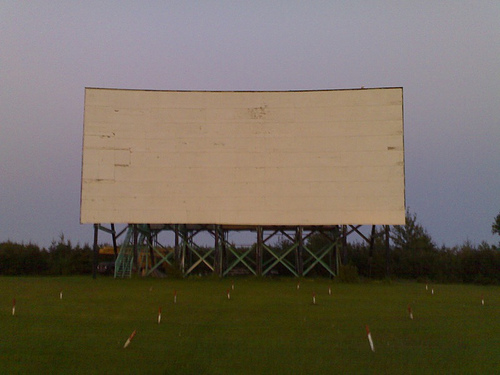 Every year that the Princess Pat stays in business is another gift to the community: it’s in such an unlikely (albeit stunningly scenic) location and has projectors that are seemingly at the edge of their life. Playing on Saturday was Garfield 2, proving yet again that I will see any movie given an interesting enough setting. Actually, the movie was much, much less bad than I thought it was going to be: it was a stock “city cat, country cat” story, with an interesting cast that included Bill Murray (as the voice of Garfield), Tim Curry, and Billy Connolly. Oliver loved the movie, and stayed away until the very end, which was a first for him at the drive-in.

We made it about halfway through John Tucker Must Die, the second feature on the double bill, before I realized that staying to the end would compromise our awakeness for the next day, so we headed off to Northport around 11:00 p.m.

We started off Sunday morning with a hearty breakfast at the Inn (included with the night’s stay) and then drove north to the very, very end of the Island (or the very beginning, depending on your politics) ending up at the North Cape Wind Farm: 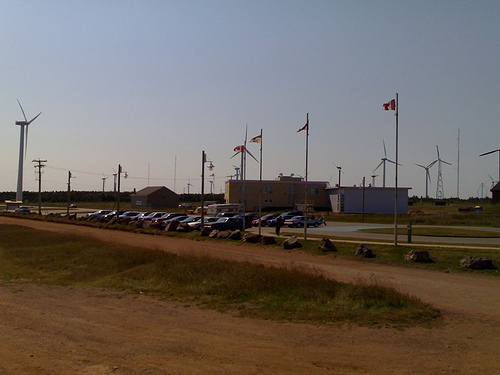 We found the interpretative centre there much upgraded since our last visit: it’s now a combination of science-centre like “here’s how wind works” displays, lots of pro-wind and pro-hydrogen propaganda, and the requisite “useless interactive multimedia presentations on expensive PCs.” There’s money dripping from the walls (yes, it’s ACOA money too), but the end effect is a pleasant and educational way to spend an hour.

From North Cape we headed right down Route 14 to West Point, stopping at the Seaweed Pie Café in Miminegash for an excellent lunch (seafood chowder plus scallop burger), at West Point simply for the lighthouse photo opportunity, and ending up at Glenwood for a visit to the Pioneer Farm in Glenwood, a place we’d been turned onto by friends who’d visited a few weeks ago. 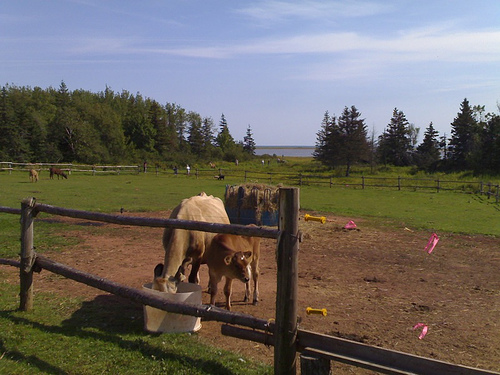 At their farm gate you drop $5 in an honour box, pick up a brochure, and then take a little self-guided tour of their turkeys, cows, chickens, horses and llamas. While the experience was a touch ascetic for my tastes, you have to admire their efforts, and their willingness to share their experience (to say nothing of their entrepreneurial pluck). If you want to drink the Kool-aid in a more serious fashion, they have a cottage for rent right on the property, and guests are invited heave and pull along side them during their stay.

The sun getting low in the sky, we made a bee-line from Pioneer Farm to Kensington for a stop at the Frosty Treat (where we found an exciting new set of signage — very well designed) and then headed home to find Catherine covered in paint and stain and wood oil.

It was a nice weekend, all in all: Oliver and I got to spend a lot of time together, we reminded ourselves of the many wonders of West Prince, and I got away from the keyboard for 48 hours. We’ll have to go back in 2011.

Thank you for this info and your honest opinions. We are at a loss sometimes to recommend to friends visiting the Island where to go and what to do. We have been let down many times, including a sailing trip out of Cardigan for $60 that advertised a lobster lunch, consisting of a little lobster meat mixed up with mayo and unceremoniously stuffed in a baggie, some chips, coke poured into a plastic glass and a few Presidents Choice cookies straight out of the bag. The other night we went to the ceilidh at the Benevolent Irish Society (or Belligerent Irish Society, as Lorne Elliott would say) and were disappointed. While the music was fantastic and all we could hope for, the main fiddler of the evening had virtually no personality, interacting very little with the audience and neglecting to introduce any of his music; and the advertised “lunch” was a few store-bought cookies, an urn of hot water to pour over tea bags and instant coffee with tinned milk. I think this Island has a lot to offer but it has to become more conscientious in what it offers tourists, especially at the prices that are being charged. Another very unprofessional action was pulling the lifeguards on beaches prior to the Labour Day weekend, although, on a brighter note, it meant there was no entry charge for the national park.

Sounds like a fine time in the tradition of coast guard day…I cannot imagine a better end to the summer!

It is nice to hear your opinion, direct and honest, about this end of PEI. How did you plan your trip and what tipped you off to the ACOA fundedness of this county Prince? By default any nice building is usually ACOA restored — they should have thier own show on HGTV — ACOA makeovers. Without ACOA the wind would still be blowing through quite a few windows of empty old buildings here in Tyne Valley, home of the former ACOA minister.

I learn quite a bit about the details of places and things from you, thanks for the account of your trips here and everywhere.

There’s only one place you missed. Lennox Island, the best day to go is Saint Anne’s Sunday with the parade and crowds. The first solitude!

The inspiration for the trip was the fair in Abram Village. And I’d been wanting to check out the Northport Pier Inn for a while (so I guess the ACOA money brought at least $145 into the local economy).

I visit Prince county each summer and so noticed a major decline in businesses that were open this year. As aluded to Tyne Valley and also Wellington in particular seem to have been hit very hard. It seems to even beyond the directly funded ACOA projects to small restaurants, convenience stores and gas stations.

I took the trip to North Cape on a cloudy mid-July Friday. I hadn’t been since just before they installed the new windmills. We ate at the restaurant which was not up to the calibre one would expect of such a magnificant facility. They had only one kind of salad: caesar, which caused at least one other table to debate (in French) whether they would stay, and the menu was quite limited all-round. We bypassed the interpretive centre, which, according to Peter, may have been much-improved since our last visit. We were disappointed by the lack of opportunity to view the windmills up close — perhaps some sort of display windmill with plexiglass sides could be used to show how they work, and a viewing platform with explanations of what is in the wind farm would be nice. There is a viewing platform to see the sights in the water, but it is not pointed toward the windmills.
Other than the 20 or so cars at the Cape, we found the North Coast Coastal Drive to be almost deserted. It was raining when we arrived at Northport, and we found only one car at the hotel (presumably a staff member), and no-one at the the adjacent complex, so we kept driving. On previous trips, I have been impressed by the Kildare Capes, but note that there is no lookout or other viewing opportunity. There is a small church there where I have parked to view them. I would suggest that they could do something in this area. I also noted the decline in the Tyne Valley area mentioned by the previous commenter. For example, the pub owned by Joe McGuire’s son was up for sale. In the Evangeline area, the hotel complex and Le Village restaurant were closed last time we were by, I guess my overall impressions are that there is a lot of driving, but relatively little to see in comparison, for example, with the National-Summerside-Charlottetown triangle, or the Blooming Point-St. Peters-Grennwich tour we took on the weekend.

Just wait until they get that gated community in Tignish.
Then things will be hopping.

I hope the gated community in Tignish gets off to a faster start than the luxury housing community in Greenwich which, I noted on the weekend, is still completely empty.