The owners of the Rodd Charlottetown hotel have been running ads on the CBC trumpeting their 75th anniversary. One of the shots in the commercials is of what appears to be a roof-top deck. I’ve always had a fascination with the notion of this deck, especially since seeing archival photos of it. But I’d never heard of anyone actually going up there.

This afternoon, bolstered by a hearty meal from Interlude and the fearless moxie of my sister-in-law Jodi, we walked over the see what we could see. I stopped at the front desk and asked if we could go up and take a look; they happily handed over the secret code that unlocks the door to the roof, and provided instructions for navigating our way there. Five minutes later, we had a panoramic view over the city: 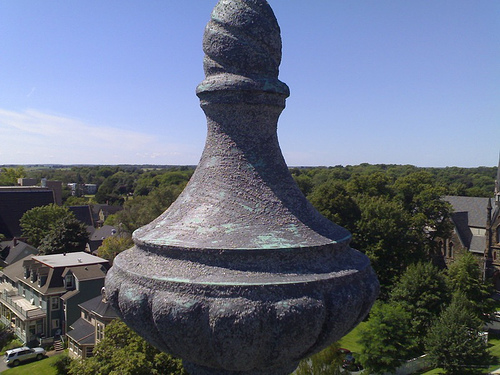 Something tells me that I have to organize some sort of party for this space sometime very soon.

I’ve taken numerous pictures from up there which are on my gallery. a nice view

When I was in Charlottetown a couple of weeks ago I picked up Michael Hennessey novel “The Betrayer” in which the Charlottetown Hotel plays a central part. The narrator reminisces about climbing up on the roof of the hotel as a boy when it was under construction.