I don’t know the real story of how Chef Gordon Bailey went from being superstar Dayboat chef to running the new food court at the Confederation Court mall, but I’ve a sense that we’ll all be happy he did, no matter how it happened.

Today is opening day at Urban Eatery, the recasting of the food court — formerly home to traditional mall vendors like Grandma’s Deli and the Oriental Wok — as an upscale, well, urban eatery. It’s still a food court — you can’t completely seal off the Muzak — but boy is this not your father’s food court: 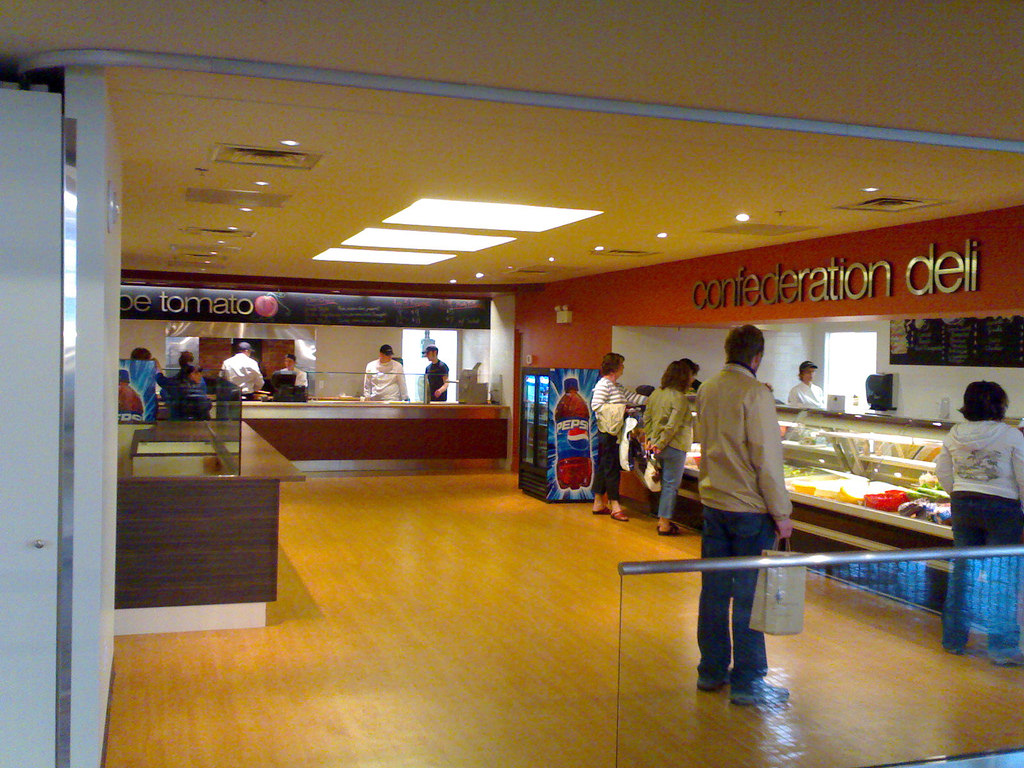 I stopped by on Saturday for their “soft opening” and had a slice of thin-crust brick-oven pizza (“Greek” style — excellent) and a cappuccino (a little milky, no takeaway sugar available, made by, alas, an espresso amateur, but nonetheless not a bad cup of coffee at all). Then Oliver and Catherine came by and we shared an apple danish (very good).

The real star of the show, however, is the “confederation deli” section, pictured above. From the looks of things this is a bona fide deli: meat, cheese, fresh veg, and bread that appears to be made in house. I’ll take lunch there soon and let you know how I make out. They also sell bread “to go,” by the way, and we took home an approximation of a baguette on Saturday and consumed most of it on the weekend. It wasn’t “oh my God, I’m in France,” but it was pretty good bread nonetheless, and surely it can only get better.

BGHJ certainly did a fantastic job on the interiors of the space: take out the Pepsi coolers that are anachronistically hulking in the midst of everything and you could be in Kastrup Airport in Copenhagen — it’s all wood floors and polished metal and lower case sans-serif. If nothing else the architectural exorcism of the food court aesthetic on the inside means the place deserves our support.

I’ve long been a fan of the Confederation Court Mall. Having seen the downtowns of several cities in Ontario completely ravaged by downtown “redevelopment” (Brantford, Hamilton, and Peterborough are only three examples) with large-scale razing of existing buildings, the fact that in Charlottetown the same impulse was carried out by preserving what existing and building in was a fortunate masterstroke.

Now that you can get what promises to be a decent sandwich, and the whole place is lit with free wifi, it’s possible that the second floor of the mall, a space that’s tried so hard over the years but has never really taken off, will become an interesting place to hang out. Stay tuned.

Postscript: had lunch at the new deli today — smoked turkey sandwich on Bavarian rye bread with cilantro mayo. It was fantastic. They have very, very good pickles too.

You have discovered the key to my aesthetic heart, Ann. Is it any wonder I like hanging out in Copenhagen.

Well, it’s a wonder to be because I have never been to Copenhagen. But I am guessing its the sans serif capital of the world.

I was there today at noon. About twenty people milling around, perhaps ten in a line up, another three or four in front of the counter. Nobody seemed certain as to where to line up to get anything.

I left and went to Subway.

“I left and went to Subway.”

There at noon today also. Okay sandwich, excellent salad but they’ve gotta do someting about that coffee.
Typeface great, however.

Good sandwich. I’d prefer to see some named sandwiches on the menu as I don’t always feel like choosing all my own fixin’s.

I had a really good sandwich too today. I appreciated the option to have both smoked turkey and black forest ham. Fresh pineapple, Havarti, cilantro mayo — Yum! Good value for $4 too.

Lineup too long at the Deli, so I checked out the pizza place. $5 for a dimuitive slice, or $7 for the slice with a salad. I left and got the $5 (taxes-in) HUGE slice AND a bottle of pop at Jack’s. I guess decor (sans or avec serif) costs! I will attempt the deli once the lineup subsides, as the above reviews look favorable.

Wow,
I am soooo impressed with this new food court. I tried the wrap last week and today I tried the soup. The chef was great and allowed me to sample the two soups (which were both delicious, I might add) before choosing the Squash soup….mmmmmm good. I definitely will be boasting about this place to everyone I know. This is healthy eating at it’s best and a great price tag to boot. Keep up the great work, all.

Ps. There’s something very appealing to the pallet about clean and friendly places to eat :)

The first week was pretty much a learning experience for us all.We have been getting some of the kinks out in order to serve people better. It seems to be working well. We have a busy lunch from about 12-2 so if you do not like to wait I would suggest you come before or after. Our deli sandwiches are served on your choice of fresh baked bread with a selection of condiments such as pesto mayo for example. The maple vinegarette salad dressing is to die for, if you try it youll be back for more. The pizza is made on thin crust so you can taste the toppings (the slice of pizza is half a 9in.for $5(TAX INCLUDED) and the soups are amazing. Something different every day. Try a taste you may be surprised. As Gordon says “soup could be a main course.” The bottom line is if you want fresh yummy food come to the Urban Eatery, if not ,than go somewhere else. Simple.

Went back today, and tried the Ground and Pound location. The chicken breast on a salad is quite good, with the salad nice and fresh. The chicken was plentiful, but a bit salty. With a large drink it came to just under $8.

The line up locations were now clearly marked, and it wasn’t too busy at 11:45 am. It certainly was busy after 12:00 noon though!

All in all, I will be back again.

My wife and I both ate there for the first time on Tuesday on a suggestion from her co-workers. We ordered a full 12” pizza and split it. Overall it tasted good, and the rest of the choices will be bringing us back again. I’m excited to try the world food counter next time, as I get sick of our choices on the island which consist of italian, italian or fake chinese.

LOVE IT — my fav place to eat at lunch time! Aside from the fantastic food, reasonable prices and great atmosphere (and I’m not just saying that because it’s such an improvement over Grandma’s — sorry Grandma), the staff seems genuinely happy to be working there! Gordon is obviously taking this venture very seriously. I’m not sure why he left he Dayboat, but I’m sure glad he did. Another note: very pleased to get daily reminders of what’s on special via the daily newsletter.