When I first landed on Prince Edward Island almost fifteen years ago, one of the first places I went was to the Computer Services department at the University of PEI. At the time UPEI was running a pilot project to provide dial-up Internet access to Islanders, and anyone who asked could sign up. Which is how I became caprukav@atlas.cs.upei.ca.

This project was revolutionary: it got the Internet to Prince Edward Island well before the days of a market for Internet, and a lot of what’s happened on the Internet here on the Island can be traced back to people who were involved, as users or organizers, in that project.

Which is why it’s unfortunate that the same “Internet for the people” ethic doesn’t apply to the provision of wireless access on the UPEI campus.

Visiting UPEI this morning I fired up my wifi-enabled Nokia N95 to find wireless infrastructure spread across much of the campus, with four SSIDs in evidence almost everywhere: 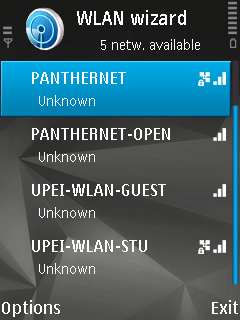 Unfortunately the two non-secured networks, named, ironically it would seem, “OPEN” and “GUEST,” both lead to a PantherNet Open Wireless Login screen: 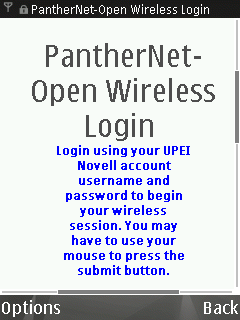 The network is locked down, and only students, faculty, and staff are permitted access.

This would be fine if you have a vision of the University as a walled institution with limited intrusions from outsiders.

However I prefer a model where UPEI is a centre of scholarship and resources for all, regardless of formal affiliation.

Making use of the resources of the University is considerably enhanced by having free and unfettered and anonymous access to the Internet, whether it be to find out when the next bus is leaving, to snap a photo of an article in the library for OCR and translation to a different language, to send and receive email, or any of the myriad other usefulnesses the network can provide to a curious person in an environment that should be seeking to embrace and extend curiousity in every way possible.

Can someone at UPEI make this happen, please.

There is (or was at least) an open wifi in the Cari Centre, but I think it was an accident. UPEI and open wifi don’t seem to get along. I’ve been trying for a couple of years to convince those who need convincing that an open wifi is needed on campus. Heck, all they’d have to do is set up a Meraki network.

This is a continual headache for the IT support staff here at the library trying to get students’ wireless connections working. Some things shouldn’t be hard.