Oliver and I were snuggled in front of our workstations here at the office on Sunday afternoon, content to spend an afternoon at work and play, when I was suddenly struck with one of those “oh my, winter will be here soon” revelations. At that exact moment I read this Tim Chaisson tweet:

heading up to souris to play a show in the park! last ‘morning fold’ show of the summer on pei, should be fun :)

With winter bearing down on us, and the added attraction of this being the last show of the summer, we had no choice: we detached from our desks, piled into the car, and headed east.

When it comes to music I’m very much a contextualist: I’ve little interest in workaday music shows, but give me a special venue and you’ve got me hooked (see also Garnet Rogers at the Trailside and Oddawn at the mall in Porto).

So the opportunity to hear Tim Chaisson and his group on home turf in Souris, for free, was simply too good to pass up.

I was not disappointed.

We got to Souris about 30 minutes after things were supposed to be starting – Souris is far away – and so we were just in time to catch two songs from Brielle Ansems, the opening act. Man, does she ever have a voice; she’s someone to watch for:

Twenty minutes later, Tim Chaisson and Morning Fold were on stage. And while this was a tiny free concert, with, it would seem, mostly Chaissons in the audience (and mostly Chaissons over 60), the band was as good as ever, and they came with a full kit and very good PA. Like I tweeted later, it was like seeing The Beatles in Liverpool.

When the concert was over we found ourselves in Souris and needing a place to go for supper.

My first thought was the Indian restaurant we’d eaten at least year, over by the hospital. We swung around there and found, alas, that it was all boarded up and overgrown. Back into town we stopped at the tourist information centre and asked for advice: our friendly travel counsellor confirmed the demise of the Indian place (and from her non-enthusiastic description of it you could derive some of the reasons why an Indian restaurant in Souris might not work out). Our choices turned out to be the Bluefin in Souris, the Sheltered Harbour in Fortune and the Sandstone in North Lake.

My personal mantra being “when in doubt, go to North Lake,” we headed off deeper into the heart of the eastern tip of the Island. My other personal mantra being “why go the regular old highway when you can go overland,” we found our way, with Oliver doing a decent job of navigating, to route 305, which led to route 335, which led (and so on). Each road smaller than the previous.

View Souris to North Lake, Overland in a larger map

So what started out as a regular old highway, soon became this: 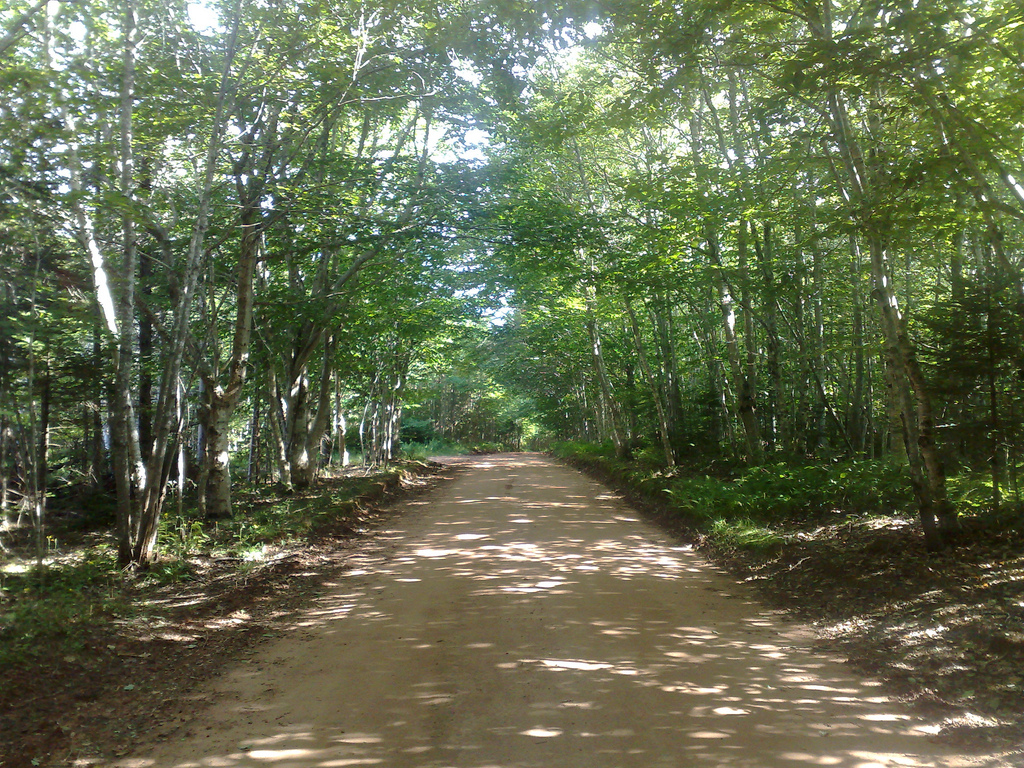 A few minutes later we arrived at the New Harmony Demonstration Woodlot and, being woodlot fans as we are, we swung in for a look. This ended up as a futile attempt to find the parking lot and trailhead and instead became a harrowing journey looping completely around the woodlot on a road like this: 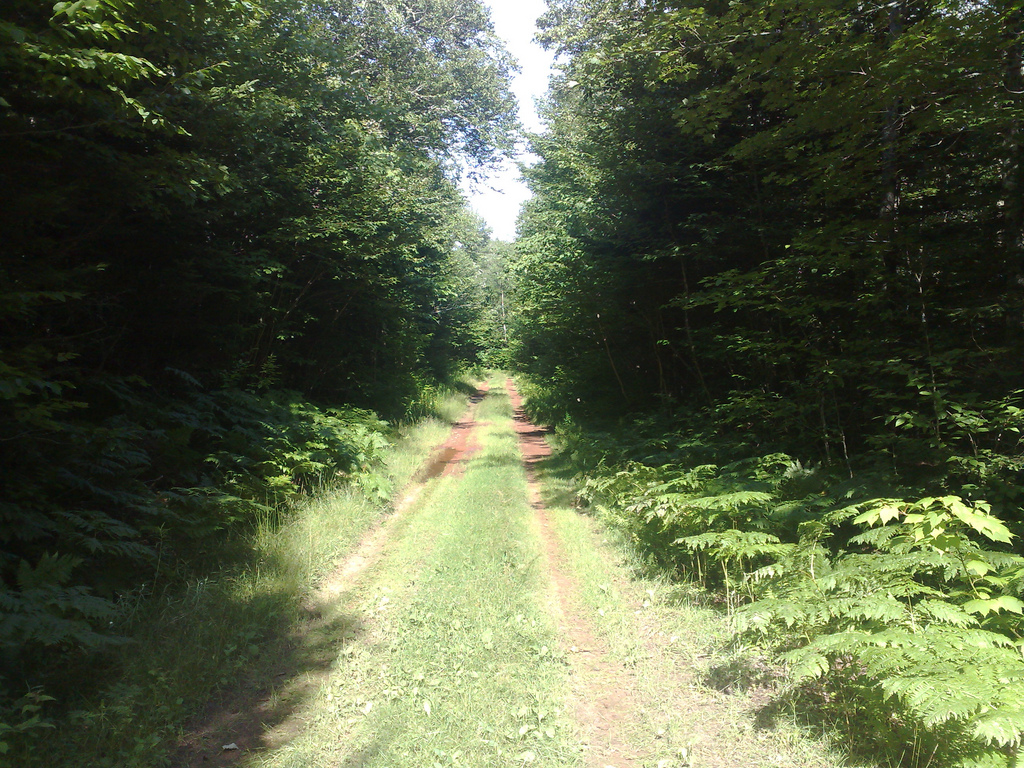 There were a few times, faced the mud puddles of unknown depth, that visions of walking back out to the highway danced in my head. But we made it, the only drama being running into another car when we were at the very farthest point from civilization, a car driven by ruffians wearing headscarves that I reasoned it was best to not stop and chat with.

We emerged from the red clay roads mere steps from North Lake and the Sandstone: 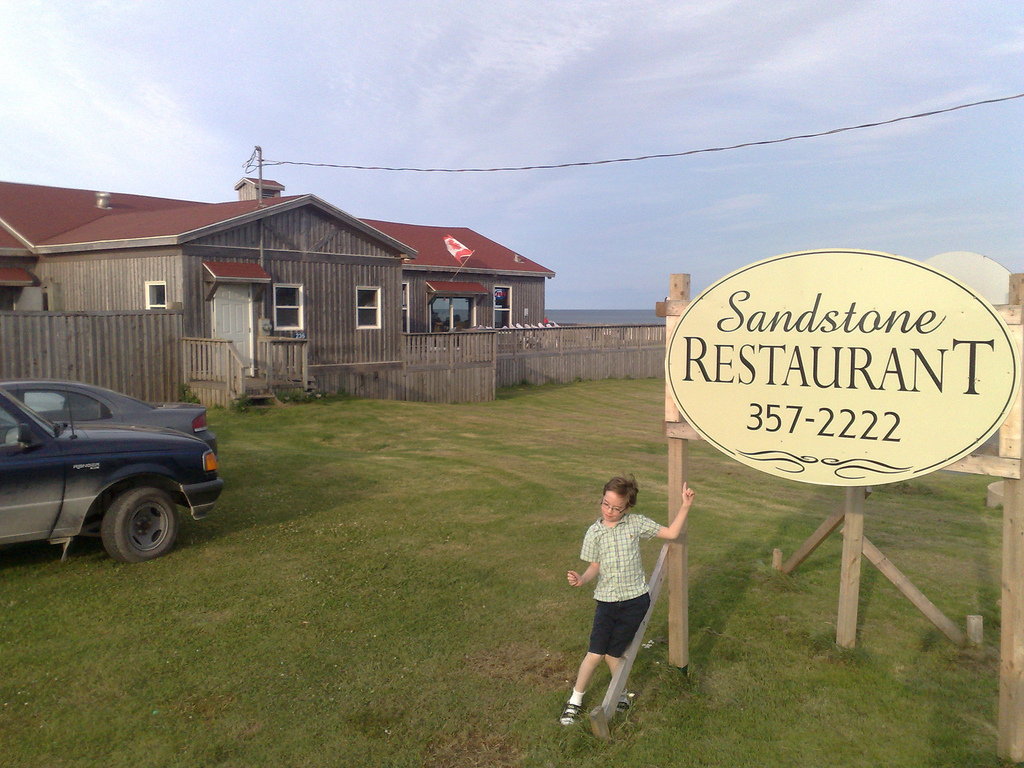 The Sandstone, it turns out, is an uncommonly good seaside restaurant. I had a platter of fresh haddock, scallops and shrimp that, while slightly over-paprika-ed, was wonderfully cooked and was accompanied by potatoes – “baby reds cooked on the grill” the were described to me – that were out of this world. Oliver had a kids portion of fish and chips that he made short order of. I finished up with a slice of strawberry-rhubarb pie and Oliver with a moist chocolate brownie. The service was quick and friendly and their only misstep was prematurely clearing away our mostly-finished meal while we were off to the bathroom (how do single parents cope with this? it’s the second time it’s happened to us).

We emerged from the Sandstone around 6:30 p.m. with thoughts of taking in the Monticello ceilidh up the road, but decided to head back to town so as to not be out to all hours. With map in hand Oliver navigated us along Route 16 to St. Peters, memorizing the names of the communities along the way – Priest Pond, Rock Barra, Hermanville, Clearspring, St. Margarets, Naufrage, Monticello, Goose River – and by 8:00 p.m. we were pulling into the driveway at 100 Prince Street.

All in all a great Sunday afternoon.

Sounds like a great summer journey “Up East” — you passed by the location of PEI’s biggest tree in Glencorradale and it is always great to watch the tides meet at East Point ! But I love the route you took, it is one of my favourite drives.

next time try the Shipwreck Cafe in naufrage…Amazing..all the locals eat there!!!