Yesterday’s trip to pick up Oliver at Stars for Life followed much the same template as the day before: I took the bus out, we took the bus back.

This method is proving to be quite workable: it’s much less stressful than driving (especially as the combination of tourist traffic and public servant quitting-time traffic is at its peak this week), it gives Oliver and I a good chance to chat while waiting for the bus, and it only takes about 15 minutes longer than driving our car.

Really the only fly in the ointment is the stress of watching the stop sign at the corner of Beach Grove Road and Maypoint Road be ignored almost universally. Like this:

That SUV’s “what stop sign?!” passage through the intersection wasn’t atypical: over 20 minutes of waiting for the bus, approximately 100% of cars turning right off Beach Grove Road did not come to a complete stop. Including an RCMP cruiser.

I am not, by my nature, a reliable rule-follower, but when it comes to traffic laws I am a strict constitutionalist, and I deeply believe that responsible driving and cycling requires that we all follow the rules all the time.

The Highway Traffic Act defines “stop” as “the complete cessation from movement” and there’s very, very little “complete cessation” happening on Beach Grove. The Driver’s Handbook points out why this is a bad thing:

Rolling a stop sign is illegal. Remember that stop signs are placed at those intersections where extra hazards exist, such as heavy traffic or limited visibility. Slowing rather than stopping for stop signs is a dangerous practice and one that will eventually lead to collisions. If you are a beginner, develop the habit of always making a full stop. If you have driven for some years, you may have developed the habit of “rolling” through stop signs; this habit must be corrected.

I completely agree with that; indeed I witnessed a near-collision yesterday, when a commercial pickup-truck rolled through the stop sign and almost collided with a pedestrian who was crossing Maypoint Road.

On Monday I emailed Councillors Bob Doiron (Chair of the Protective and Emergency Services Committee) and Alanna Jankov (Councillor for my ward) to request that this situation be taken up for consideration; as it happened, City Council was meeting at the very moment I sent my email, and so within minutes this happened:

After the meeting I received follow-up emails from both Councillor Doiron and Councillor Jankov. And then, later that evening, an email from Deputy Police Chief Brad MacConnell, indicating that Charlottetown Police would step up enforcement. True to his word, as I dropped Oliver off on Tuesday morning there was a ticket being given out, and the Deputy Chief confirmed to me today that additional tickets have been issued since.

Of course this isn’t an issue that enforcement is going to solve: the amount of enforcement at that corner to actually change behaviour, to get the word out that you better stop, or risk a ticket, and to have that stick, would consume all the resources the police department has. And more.

Which makes me wonder whether this is a problem that could be solved through design, not enforcement. 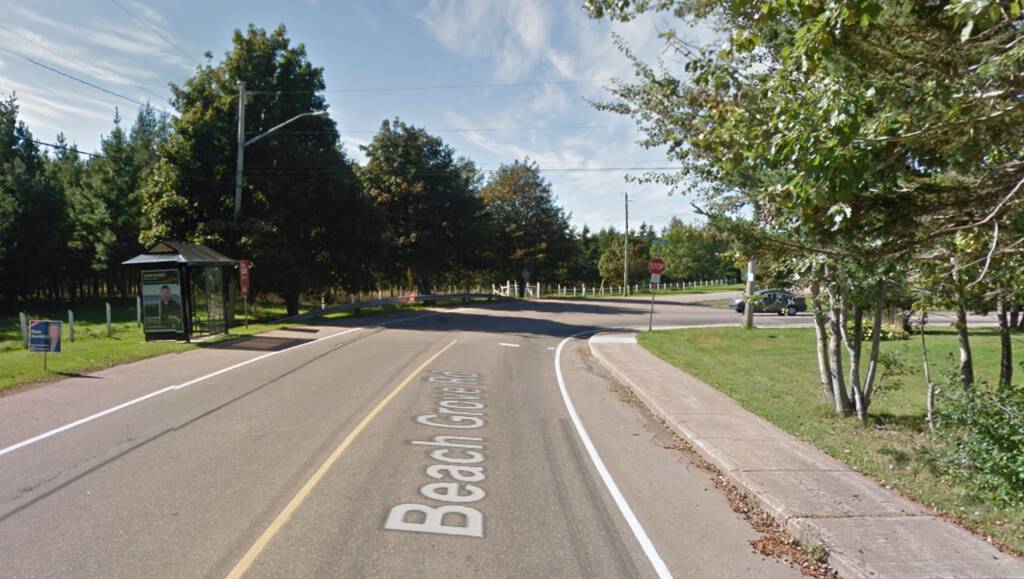 While the stop sign is visible, everything else about the structure of this intersection could be construed as telegraphing “you don’t really need to stop here.” The road bends rather than angles, and there’s a continuous white line, with no pedestrian crossing lines visible, that serves to draw the eye around the corner.

This effect is only enhanced as you draw closer to the intersection: 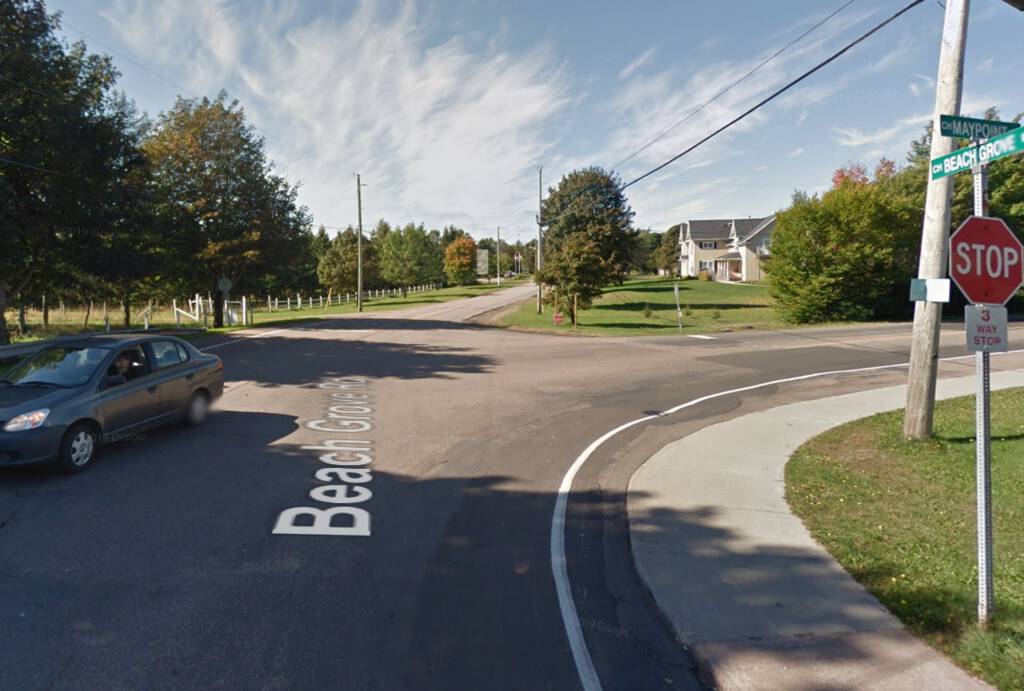 By the time you’re this far in, it looks like a pretty clear “glide on through here, no need to stop” swath of pavement, no matter the stop sign.

I’d like to see what a squared-off corner, and clear pedestrian zebra-crossing across both Beach Grove and Maypoint would do to the stopping rate.

In the meantime, if you happen to be driving through this intersection yourself, I surely would appreciate it if you would step on the brakes until you feel a “complete cessation from movement” and then not proceed until it’s clear you’re not going to run me, Oliver and Ethan over.

If you want to pixelate a video, and you have ffmpeg, try this (from here):

That’s how I preserved the anonymity of the scofflaw in the white SUV.

At least here in Golden Horseshoe it's so pervasive that I even feel odd making a full stop when driving - will it send the driver behind me into road rage?

(There's also another discussion to be had about the Canadian use of stop signs in attempt to calm roads - which largely fails as drivers race from stop sign to stop sign on wide roads that encourage speed - but this can not be an excuse for rolling through stops.)

In my time working with a municipality in Alberta, we were advised by insurance companies and engineers to use stop signs only when necessary. Using stop signs in places where there is not enough traffic to warrant them or for traffic calming actually encourages bad driving habits.
JD