Today was the big public open house at the CBC in Charlottetown. It was a stunningly beautiful mid-winter day, and seemingly most every Islander decided to come into town to attend: by the time we arrived around 1:30 p.m., they were lined up out the front door and down the wheelchair ramp.

The pedagogical highlight of the extended wending was, of all things, Pat Martel. Pat was set up in the radio bullpen with a little demo of analog vs. digital audio editing systems, and in a few short minutes he gave a really concise “new vs. old” demonstration with audience participation.

From there it was the radio studio shared by Island Morning and Mainstreet, where we got to see Karen Mair and Matthew Rainnie and Oliver got to sit in the big chair and do some studio work (hats off to Matthew, by the way, who has lost a ton of weight and looks like a million bucks).

Next was the Compass bullpen for an introduction to the VJ system by Laura Meader followed by a session next door with Clair Nantes (who, we learned from secret CBC bulletin boards, in addition to being Assignment Editor for Compass is also fire marshall responsible for the women’s washroom) and Mitch Cormier (responsible for the CBC website, but apparently without fire-related duties at this time).

As the afternoon was evaporating quickly, we skipped the TV edit demo and TV master control, and got in the long line to see Boomer and Bruce. Thirty minutes later, we were in the well-appointed TV studio (it’s about 1/4 the size you think it is when you see it on television). Boomer and Bruce didn’t disappoint: Boomer is, of course, Boomer, a delight for children and adults everywhere. And that Bruce Rainnie has more social skills in his little finger than I will muster in a lifetime, and was able to equally charm everyone from toddlers to fishermen. 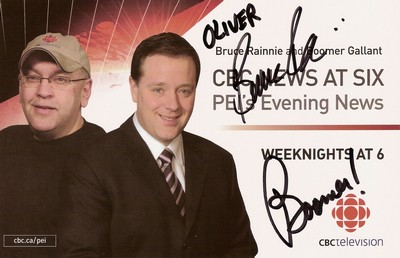 Along the way, what with the entire Island turning out and all, we got to see lots of people we knew, perhaps most importantly Riley, who turned 6 years old today (Happy Birthday, Riley!). There were thousands of CBC-branded cupcakes available at the exit, but as Oliver was completely wound-up post-Boomer, we decided to skate by and head for the exit.

Despite the lines and the sheer exhaustion of it, the open house was a good show — way better than the opening of the GST Centre in Summerside! — and everyone at the CBC is to be commended for being so nice and hospitable with a bunch of stranger traipsing through their offices.

Special bonus intelligence finding of the day: buried deep behind several layers of old sets in the Compass studio, to the right of Bruce’s head as you’re watching, is the old giant wooden compass, once the focal point of the news set before the name of the show was mistakenly changed. This certainly bodes well for we in the movement.

Did you notice the journalism students and the lack of “real” CBC journalists?

That’s because the CBC didn’t want to pay their real staff to be there. So they hired journalism students — who had never actually stepped foot in the building before — to give tours of the workplace.

Or so I heard.

We also spent over 2-hours at the open house. Unfortunatly, our young fella wasn’t quite as patient. At only 16-months old, he let us know that 2-hours in the back hallways, waiting in the lineups was just too much to handle. Once we got the demonstration in the “state-of-the-art control room that only-takes-one-person-to-run-the-show, where nobody-lost-their-jobs-because-of-it”, Bruce & Boomer were just one-too-many-more lineups away. We had to opt for Exit-door & Naptime.

Maybe next time we’ll make it to the Final.