Last Thursday morning I headed off on my bicycle to Casa Mia for my daily espresso macchiato. When I arrived I noticed that there were bicycles locked to every parking meter on Queen Street had a bicycle locked to it. So I tweeted: 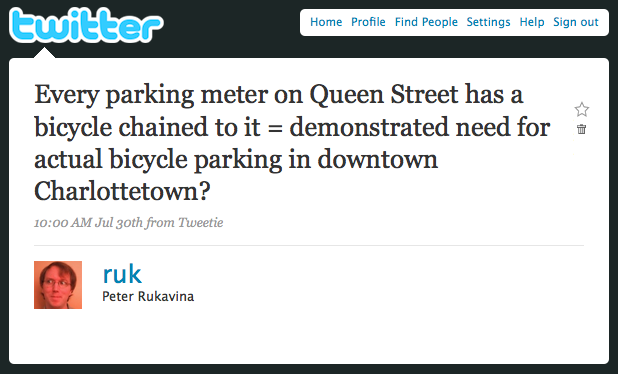 A mere 36 minutes later, the crack investigative team over at CBC Radio One’s Maritime Noon was on the case: 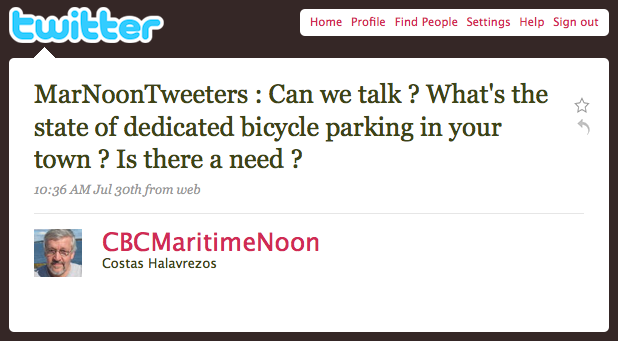 And tomorrow, a week later, the tweet becomes a full-fledged Maritime Noon phone-in:

The lovely irony of this is that three days earlier I found the essay The News About the Internet from The New York Review of Books thanks to a tweet from the selfsame Maritime Noon.  The essay includes a quote from New York Times executive editor Bill Keller:

The wonderful florescence of communication ignited by the Internet contains countless voices riffing on the journalism of others but not so many that do serious reporting of their own.

Now I’m as much of a riffer-on-journalism as the next guy, and while it’s hard to claim a “hey, look at all the bicycles” utterance is Serious Reporting, it is nice to see the ecosystem runs both ways.

I have to confess that one of the bicycles is mine. I am however not sure if dedicated bicycle parking is the answer. In my experience bicycle racks are stuffed out of the way, which has two effects.

<ol>
<li>I’m less likely to cycle if I have to park somewhere, then walk to work. I live close enough that walking is only 5 minutes. The reason I cycle is convenience</li>

<li>Increased likelihood of theft, if bicycle rack is not in a prominent location. ( Anecdotal evidence from the theft of my own bicycle whilst chained to the bicycle rack at ATC )</li></ol>

I’d argue that so long as people are courteous whilst riding and parking, don’t block emergency access (hydrants etc) nor block disabled bays then chaining your bike to the street furniture should be encouraged. It shows that you don’t need a vehicle to get around, shows that people are active and with any luck it might just encourage someone else to leave the car at home and use some pedal power.