As I write there has been a vote call on Bill C-43, Budget Implementation Act, 2005 in the House of Commons. You can watch the proceedings live on Parliament’s excellent ParlVU webcast site. 12 minutes until the vote, members have been called: 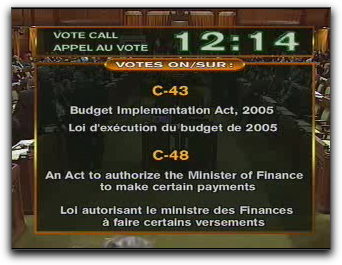 Update at 5:59 EDT: So the first vote is done: the Liberals, NDP and Conservatives supported it, the Bloc voted against. Results: 250 to 54. Now on to the next vote.

Update at 6:01 EDT:They’re now on to Bill C-48, An Act to authorize the Minister of Finance to make certain payments.

Update at 6:10 EDT: Conservatives and Bloc opposed. Kilgour opposed. Final tally: 152 to 152. Speaker has to vote: “I don’t know why honourable members keep doing this to me.”

Update at 6:13 EDT: Speakers votes for the bill. Motion carries. Bill stands referred to the Standing Committee on Finance.