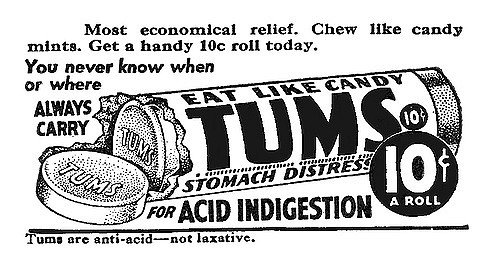 Starting back in November I found myself with a serious bout of heartburn. I suspect I had some sort of persistent stomach bug, as almost anything, even the most benign foods, could set it off. As such it was hard to avoid by changing my diet, and I became, for the first time in my life, a serious Rolaids consumer.

My problems continued in through January, and when there appeared to be no end in sight I started to look around for alternatives to antacids like Rolaids for relief.

At some point I found a very clearly-worded website, there reference to which now eludes me, that suggested that if heartburn is caused by “excess stomach acid,” one way of combatting it is to eat or drink things that are alkaline.

Of course this seems like common sense — what are antacids other than a chemical way of neutralizing stomach acid. And of course it’s something that, faced with a nightly onslaught of Nexium, Rolaids and Tums commercials on television, I never had cause to consider.

And it worked. Almost immediately.

My stomach problems have largely cleared up, perhaps for reasons completely unrelated to my modified treatment regime, but for the month or so that they persisted, my “crazy pineapple trick” worked wonders. I haven’t popped a Rolaids all year long.

But, for me, this is less a story about pineapple and heartburn but about my revelation that it might be useful to stop taking health advice from the 30-second spots between NCIS and The Unit.

But TUMS has Calcium. Something my body needs anyway.

Let me wholeheartedly and completely endorse the pineapple suggestion. It works and tastes way, way better than Maalox. Thanks for the pointer, Pete.

Great post about the pineapple juice. If you ever find yourself in a similar situation without pineapple juice. I highly recommend Zantac or Gaviscon — they are both a billion times better than Tums or Rolaids.

I don’t get heartburn often, but the odd time I do both of these products just plain work.

Pineapple contains a proteolytic enzyme called bromelain. It is probably helping to breakdown the protein you consume. That’s why pineapple juice is also a great way to tenderize beef before cooking. Papaya has a similar enzyme called papain.

An advantage of the 30 second spots is that they’re government regulated. So I think a complete diet of advice from strangers includes garbage on TV as well as garbage online.

Papaya contains papain which is a potent digestive enzyme that in conjunction with bromelain from pineapple and amylase can be extremely beneficial in the digestive process. I encourage my patients to use a complex of these enzymes to solve their digestive woes.

Apple Cider Vinegar is the ultimate in increasing digestive motility. Read Heartburn — Oh How It Burns! for more on what I have to say about Heartburn.

I heard apple cinder also works.so there are several natural heartburn remedies works,but you have to test and select the most suitable method of your own.

I’m a bit late to this party but I had the same positive results from starting to eat fuit salad for breakfast that was heavy on pineapple. I have drastically reduced my need for antacids since.

I have been doing a few table spoons of lemon juice. Its really really bitter… but works without having to eat anything.