For six months, between October 2013 and April 2014, I walked around Charlottetown with my iPad in my pack running the Moves location-tracking application in the background. It was, and remains, an elegant app, and a great, simple way to track “moving around,” whether by foot, bicycle or otherwise. Alas Moves was acquired by Facebook at the end of April, and I just couldn’t conscience the idea of constantly telling Facebook my whereabouts, so I uninstalled the app and cancelled my account.

Before I did so, however, I requested an archive of my data, and, to the credit of Moves’ developers, what I received in return was an elegantly-structured data dump of everything in formats ranging from iCal to GeoJSON. I took one of the GeoJSON files provided – a record of all of my Moves “activities” over that six months, and loaded into Quantum GIS and the result was a rather accurate (and beautiful) picture of my day to day life in Charlottetown: 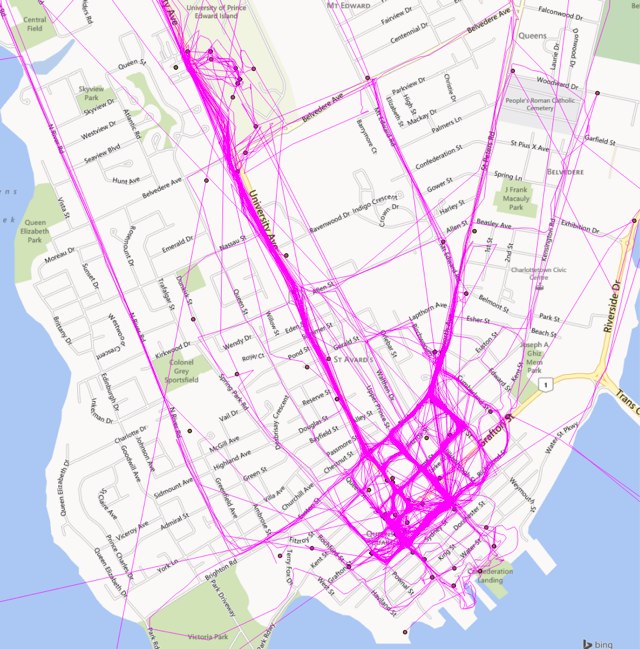 Between Moves and Foursquare and Plazes and Twitter and Flickr and the late Google Latitude and all of the other applications I run that leave a geotrace, I have almost a decade’s worth of my geolocation archived away in various formats; one of the items on my Hacker in Residence to-do list is to develop a unified visualization tool for all that data so that I can fly through time and explore my whens and wheres.