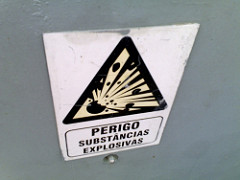 After getting settled in our house here in Leça, Oliver and I headed out to see what we could see. Walking over the swing bridge to Matosinhos, we noticed a bunch of military-looking ships docked right next door, with what appeared to be civilian tours going on. Never ones to shy from a good “crawling around a ship” opportunity, we diverted off the bridge and into the dockyard, acting as if we knew what was going on, and walked up onto a German frigate that looked inviting.

Oddly, we seemed to essentially have the run of the ship, and could walk freely about looking in all the nooks and crannies. Things were a little more formal on the Portuguese frigate moored right beside: there we had to go around with a tour (in Portuguese, of course) led by a fresh-faced sailor. But even there we had the run of the operations room, and apparent free access to a bunch of items marked “NATO Confidential.” Oliver was especially enamored of the shipboard helicopter, rolled out of its hanger to make a sort of children’s playground.

Further down the dock we found a U.S. ship moored beside a Canadian one — HMCS Athabaskan; unfortunately the Americans and Canadians were less hospitable, and didn’t invite the public in for a tour but instead had several imposing looking “you don’t even want to think about walking over here” guards on duty.

We took lots of photos of our tour.