Apparently there’s a major international cycle race happening on my street on Thursday: 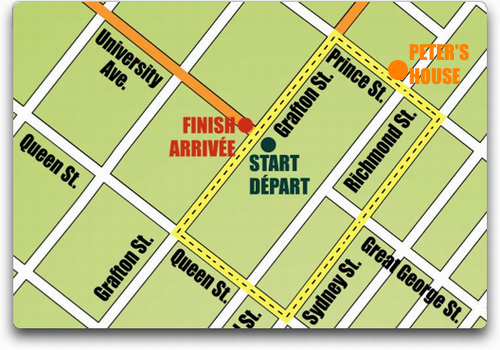 I’ve got no problem with the notion of holding a cycle race on city streets — cycling’s great, and we should all do more of it.

It would be nice, however, for race organizers, or the city officials who allow for the street closures, to let residents know how we’ll be affected. There’s nothing on the race website other than the map above; I had to call the race office (which sent me to someone’s cell phone) to find out that my street will be closed from Noon to 7:00 p.m. on Thursday and that I won’t be able to take my car in or out during that time (I phoned the city for confirmation of this, and they told me “full closure” would extend from 1:30 p.m. to 8:30 p.m.).

Again, I support the race, and I don’t even mind the inconvenience. But if you’re going to rent out my street, the least you can do is tell me in advance.

I’m all for cycling too but had no idea that it involved helicopters hovering over my house and a loudspeaker setup aimed directly at my house for the Confederation Bridge leg of the race. My house is located across from the onramp to the bridge and from 9am until 2pm Monday I had to live with the fact that this is what a bicycle race entails. Not to mention the inconvenience to businesses and travellers who wished to cross the bridge between these hours. A little forewarning would have gone a long way.

I certainly got a flyer in my mailbox last week warning local residents how it would affect them, and with a map. I think it came in the mail when you were in Europe, and it would have been really easy to ignore as a flyer.

If I got a flyer, I applaud their efforts.

According to inside sources the resorts in Cavendish were notified only yesterday that today the road would be closed for the race… Food deliveries, tour arrivals, and staffing all had to be rescheduled at the last minute. Hopefully, if this is a yearly event, they will get better at letting those affected know about it.

www.gov.pe.ca had this issued, emailed out and sent to all media…and I heard it on Friday. So the roads, bridge closures, shouldn’t have surprised anyone…

I had confirmation today that all the re-paving that’s been happening on Prince and Sydney Streets is due to the cycling event. I hope someone did a good ROI on this. Nice to have newly-paved streets, of course, but it wasn’t vital.

It seems that everyone else within a multi-block radius of us got a flyer in the mail, but somehow we were missed. Oh well.

Be there early!! I will be participating in the Celebrity Race segment in tomorrow’s Tour de PEI.

One week as an MLA and you’re already a bona fide celebrity! (or maybe this is latent celebrityhood from your Cyn 1.0?) I’m going to try webcasting the bikes zipping by our house on Ustream.tv if I can get all the tech to cooperate.

The re-branding of the street has begun — ScotiaBank banners up at the corner of Sydney and Prince.

I didn’t get a flyer either, and I’m on the corner of sydney and prince. I guess it wouldn’t really have affected me as it has you.. Oh well..

Any information you received would likely have been incorrect. The CBC was broadcasting that the “downtown” would be closed to cars and parking. Called the police department about Water Street and was told it would be closed. Of course it wasn’t. We’re still amateurs.

We pay very high taxes in this province and in the city of Summerside. Our streets and highways belong to the taxpayers, not to race organizers.
Last year in Summerside there were a lot of very angry citizens who suddenly found they no longer had access to their streets and homes.
I can’t believe that there is not a larger cry of outrage at this complete disregard for the rights of the taxpayers and citizens.
I would like to know who has the authority close complete access to PEI for several hours by closing the confederation bridge, and closing the streets of Summerside for hours on end.
I am sure this race might be an interesting spectacle for those who have time for it, but most of us still have to work for a living and we need our highways and streets.
I really can’t believe that this race is legal.
I know I for one will remember this come election time.