Oliver announced late last week that he planned to participate in the much-vaunted Crow Parade that is the spiritual backbone of Art in the Open every year. As a result, Oliver and Catherine spent much of Friday afternoon crow-costume conjuring.

On Saturday evening, at the appointed hour, I accompanied Oliver to the plaza at Confederation Centre of the Arts for the start of the parade and, when the caw came, I walked along beside him out onto Victoria Row.

As we walked along, I could immediately tell he was agitated. This was something of a feat, as I rely a lot–I realized last night–on Oliver’s facial expressions and body language to tell how he’s feeling, and, as he was dressed like a crow, I didn’t have this to go on.

Using all of my fatherly powers, however, and with Oliver reaching deep into himself to help, he managed to communicate that he was anxious and angry about not having any other crows to walk with (in previous year’s he’d been accompanied by Catherine, or by Derrick both of whom, being more game than I, walked with him in their own full crow regalia; I was not dressed like a crow).

Nearing the intersection of Queen Street, exacerbated by noise and claustrophobia and scads of people taking photos, Oliver tipped over the edge and got really, really frustrated, to the point where I thought we’d need to exit the parade and head home. But Oliver insisted that we forge on, albeit in an angry fugue that I knew wasn’t sustainable.

It was at this point that I spotted crow Tony Reddin walking along beside us.

“Tony, would it be okay if Oliver walked along with you?”, I asked.

And so Oliver left my side, aligned himself with Tony, and happily walked the rest of the parade route at his side.

Here they are making their way along the Victoria Park roadway (Tony in the brightly-coloured feathers, Oliver to his right):

I can’t imagine anyone better to come across in our moment of need than Tony: he is among the kindest and most welcoming people you’ll ever meet, and he welcomed Oliver into his murder as a partner in crime.

Here they are, at the end of the parade, side by side in front of the gathered crows: 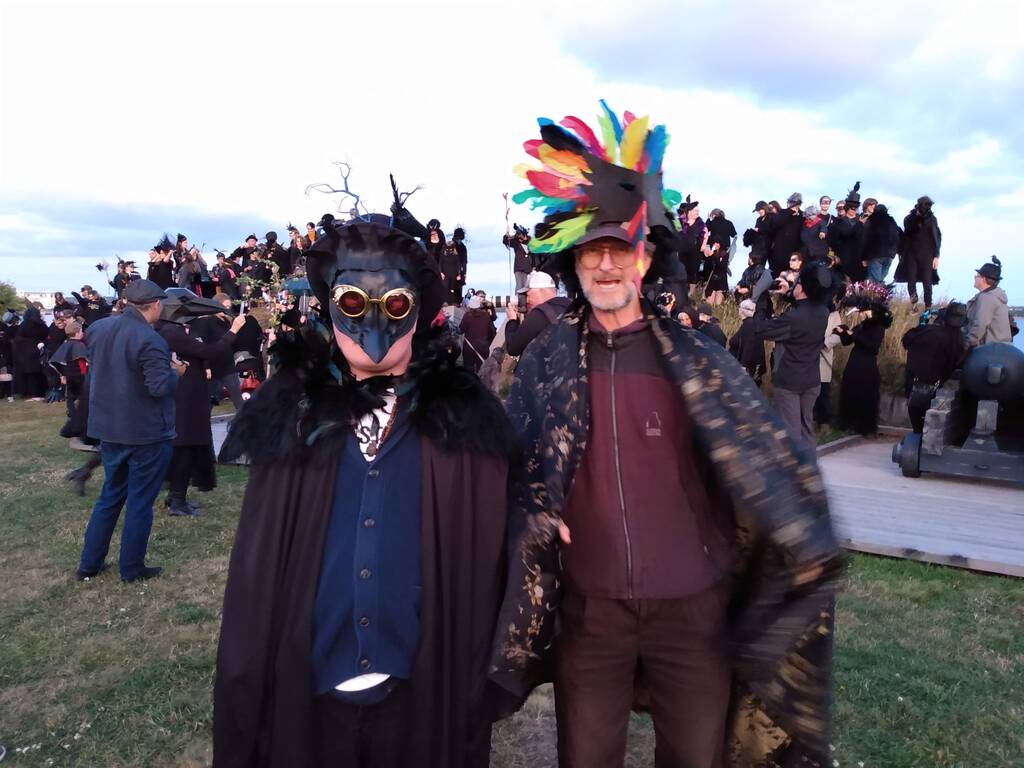 Thank you, Tony, for your crowmanity.

Lovely story, great costume. I'm sure Cheryl will be delighted, crows being about her favorite creatures

Oliver is right. I love this story and the crow costumes!

You and Front Seat O. are welcome at the Crow Parade next year (or any other!).

Meander tall as a crow mignon.

Tony and Oliver very handsome crows. Tony one very special person, and a night for Oliver to remember.

You said it well, Peter. There is probably not a better crow on this Island Oliver could have met it that moment than Tony Crow-din.

Tony,
is a wonderful kind and caring person, no doubt about his one.

Love that pair of handsome crows, Oliver and Tony. Full of admiration for both of them!