Here’s a snippet from The Guardian, September 14, 1914, showing the September 1914 tide predictions for Charlottetown and highlighting the high tide times for this day, 100 years ago: 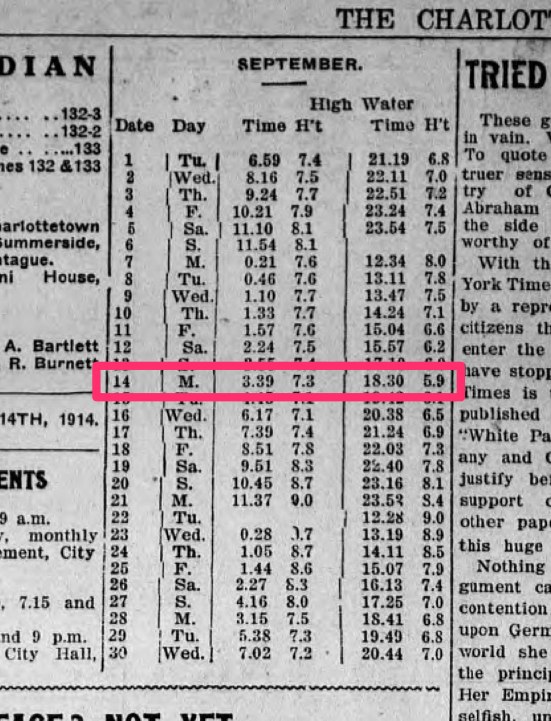 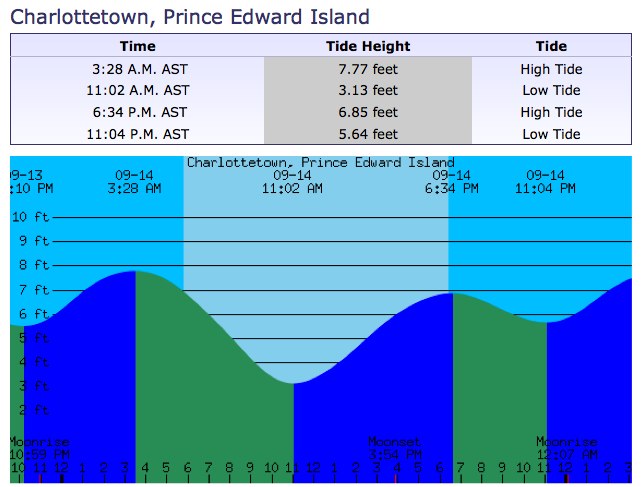 Although most every day of my working life for the past 18 years has, in one way or another, been steeped in the Moon and the Sun and the tides and the planets and the weather in one way or another, it never ceases to amaze me that the forces of nature have such a rhythm that they can be predicted not only a month in advance, but from a distance of 100 years.

Funny, my expectations were the opposite, and before I got the end I thought you'd be addressing the discrepancy as a problem. I figure we can predict eclipses 10,000 years in advance and slingshot Voyager out of the solar system to the mm, so we ought to be on top of the moon. On reflection, though, the oceans slosh about, so tide height to some degree is down to more than the moon--and to an especially large degree where you are, I'm prepared to believe (e.g. you've got that huge tidal bore in the Bay of Fundy).

Given that the calendar is based on the sun and the tides are based on the moon, why should it be the same for 100 years ago?

The comparison is for the same day, not two days a hundred years apart. The hundred years separates the day of the measurement from the day Peter asked his algorithm for the tide times and heights nowadays to extrapolate backwards to the day of measurement and predict what the times and heights ought to have been. The sun though does have some influence on the tides. They change a little with the seasons, I think, or with the lunar precession, or both. You'd expect especially high tides around the time of an eclipse, when Earth, moon and sun are aligned, wouldn't you?

The ebb and flow - the result of the Earth's rotation and whirlpools.

It is known, what  everything that rotates , including swirls have the property of retaining the gyroscope axis upright in space regardless of the Earth's rotation..

If you look at the Earth from the Sun, whirlpools spinning with the earth overturned, twice a day, making whirlpools precess and reflect on my own tidal wave around the perimeter of the sea..

The waters of the Gulf Maine waters are rotate counter clockwise to form a huge whirlpool, a gyroscope, which reflects the precessing tidal wave around the perimeter of the Gulf of Maine.
A similar scheme tides observed in all lakes, seas and oceans.
Continued: Forum MEPhI
Приливы и отливы - результат вращения Зе­мли и водоворотов