At times in the past, when selected of the readership have become disenchanted with the things I write here, they have drifted off into conversations about building contraptions to fling cars. I do not know why they do this; I suspect it has something to do with the Harp & Thistle restaurant, and the paroxyisms of glee that the hearty curries and beers therefrom induce.


Realizing as I do the fact that this sub-group may be finding the endless discussion of street drugs, Leo Broderick and digital television less than thrilling, I’ve decided to take a pre-emptive action. 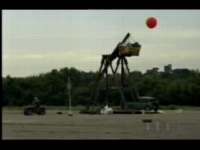 Witness the picture at right, which is a still from this week’s episode of the TLC/Channel 4 programme Junkyward Wars (aka Scrapheap Challenge in the UK).


The challenge: build a machine to fling a Mini.


I grabbed a video clip of the climax of the episode [4.1 MB Quicktime] which shows the trebuchet built by team “Barley Pickers’ ” on its maiden voyage. It is not pretty.


The clip begins with new host Lisa Rogers; she’s a capable replacement for series creator and former host Cathy Rogers. She joins Robert Llewellyn, whose absence from the U.S.-produced episodes is a shame, especially as his role there has been played by a series of annoying men with goatees.


So, there you go: proactive mention of car flinging and trebuchets; fill your boots.

Ah, Grasshhopper — we have moved beyond the mere flinging of metal and are designing a trebuchet-launched low orbital organic satellite system to propagate 2.4GHz wireless right across the province.

I must confess that the Harp & Thistle Highland Heavy Games and Medieval Siegecraft Society did play an important part in designing the data repository which lies at the heart of the project. Sadly, as you have moved from shrivelling the souls of those who utilise HTML in these columns to the outright banning of it, I dare not give the URL of the peer-reviewed page which provides the technical description. You’ll just have to wait for the abstract of the Nobel award.

Peter, you are getting the fever — but whether it is cabin or catapult, I cannot say. The tossing of a mini is an amazing goal due to the scale of counterweight required. I had dreams of a wankle rotary engine arcing across the sky but was put off by the forces of physics at play. We will watch and learn. Speaking of watching and learning, have you seen Two Men and/in a Trench on PBS Boston Thursdays at nine? Two Scottish lifelong pal archeologists dig up golf courses, etc., to uncover battlefields in the middle of towns. All ale and ska presentation.

“Sigue Sigue Spu(d)nik” if you please (sayeth surely the only owner of a twelve inch “Love Missle F1-11” on this sandbar). When I look at it now — it’s an extended version, too…what a lucky guy I am!

You would be the only seller on ebay of said twelve-inch,
I checked:
http://search.ebay.com/search/…

Some venue/bar should have a ‘bring your own’ vinyl night, with a prize for the most warped record!
I’d be there (Cameo — Word up)

Well Ken, I have a vinyl of the Fugs’ Tenderness Junction which would be a contender — depending on how you are defining warped. By any happy chance, does anyone out there have The Haunted’s 1-2-5 they could whip up an mp3 from?

…we need a bad vinyl party…

Didn’t you guys build one Alan? Someone said that I thought… anyone know of pics? video?

All of the aforementioned, Kevin: earlier post refers — the mighty treb is being used as the prototype launch vehicle for the low orbital organic satellite system which will act as an antenna array for 2.4GHz wireless across the whole Island. Successful preliminary tests were conducted at a secret location not a million miles from the province’s nicest community hall.

Wireless! Yay! Oh, wait. They already invented the internet (without fading signals, and for $42.95 a month).
Houston, the moon is not made of cheese Houston, you copy…
you’re breaking up…