We have a “change bucket” in our dining room where all the loose change in our household ends up. Over the weeks and months it gradually bulges toward overflowing, and, eventually, we must face up to its need to be emptied and turned into real money.

Today was that day.

There are two approaches we can take to this task: secure coin wrappers, spend a few hours sorting and rolling coins, then haul them up to the bank and deposit them.

Or we can take the change bucket out to the Atlantic Superstore, and use the “Coinstar” machine to magically–if expensively–turn them into paper money. 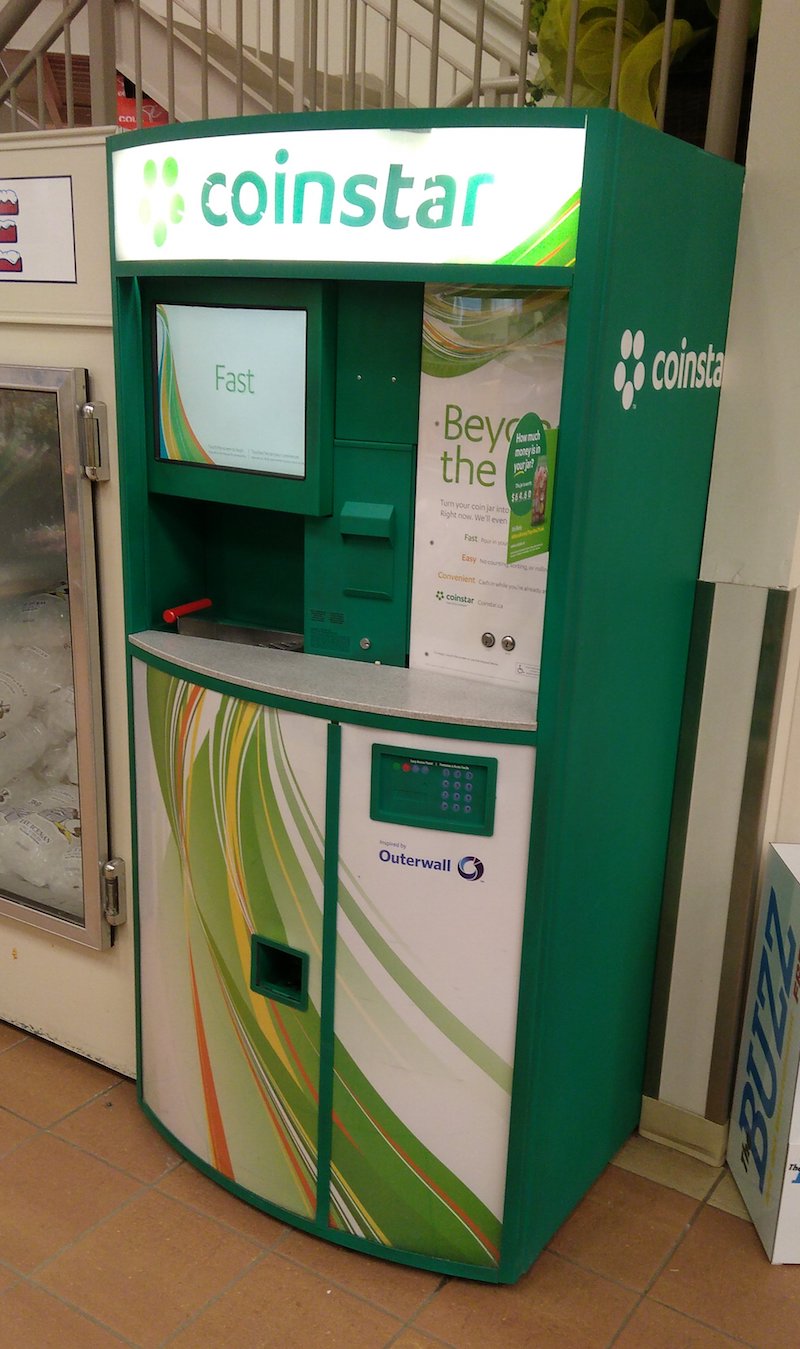 So this morning after dropping Oliver off at school, I hauled the change bucket into the Superstore, and gingerly ushered its contents into the Coinstar, When I was done, the screen gave me the total of $323.95 along with the breakdown by coin denomination: 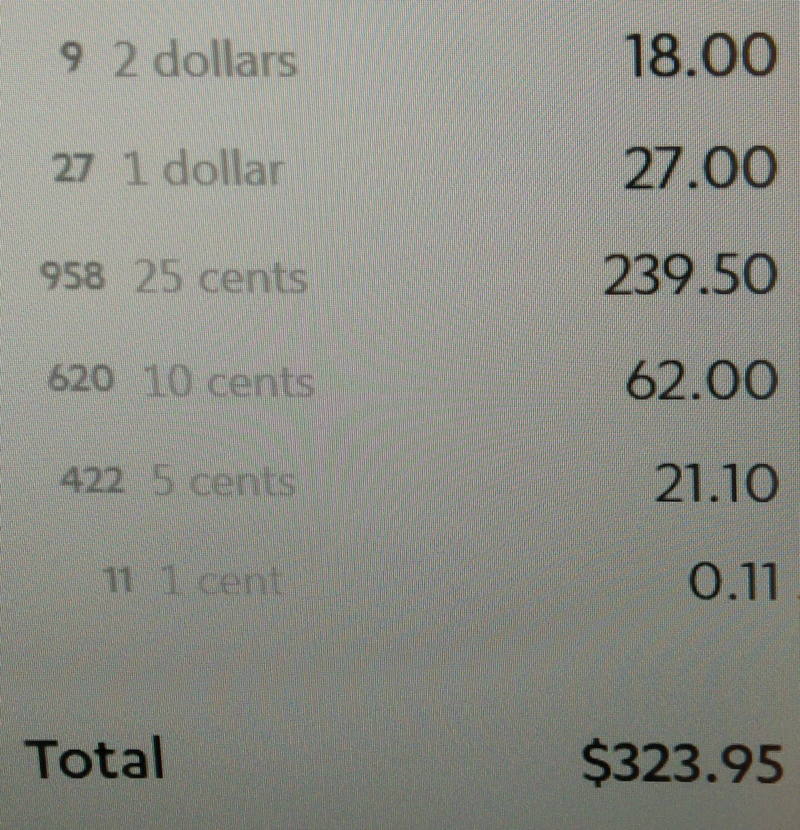 The actual total coinage was $367.71. Like I said, all that labour-saving magic the Coinstar machine does is not cheap.

There were 2,047 coins in all; the distribution of denominations looks like this: 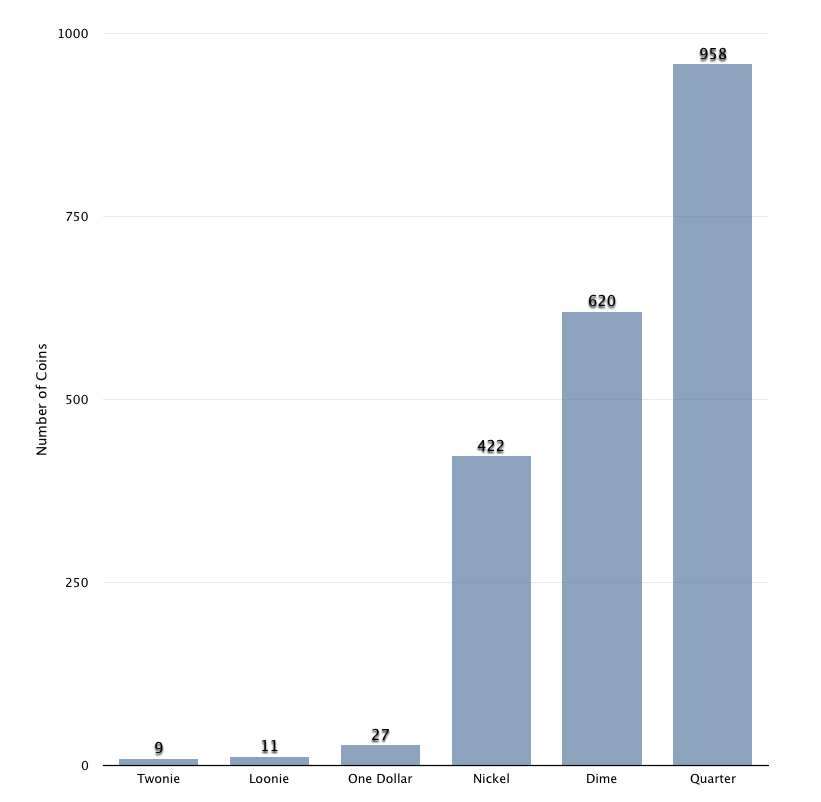 Quarters were the motherlode: they end up in the change bucket because, hey, they’re only worth 25 cents and they weigh down the pockets. But take 958 of them together, and all of a sudden you have $240!

What was most interesting to me, however, were the items in the change bucket that were not coins. Or that, at least, were not coins that the Coinstar would accept (it warns you that it might not accept and may not return non-acceptable coins, but it seems to have done a pretty good job). Here’s what the leavings looked like when the process was done:

What was left over was:

These are the leavings of about a year’s worth of change-bucket-collection; it’s an interesting archaeological dig through our year, with a collection of unanswered questions left over. Like “wait, Canada has a 50 cent piece?!” and “how did we end up with 7 silver dollars in the change bucket?”

As much as Coinstar’s commission seems like highway robbery, I did emerge with $323 more in spendable paper money than I had before I walked in the door, and I saved myself the drudgery of sorting and rolling, and that’s worth something. Maybe not $43.76. But something.

When all was done, the Coinstar machine spit out a voucher: 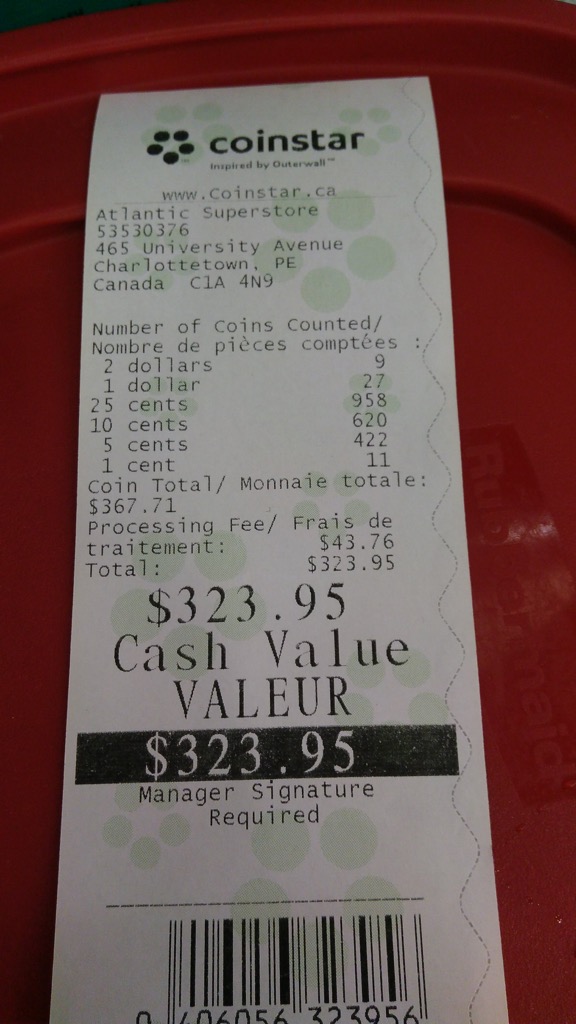 I took the voucher to a cashier in one of the regular checkout lanes, and she cleaned out every last bill in her till to pay me what I was owed.

And now the cycle begins again. There will be 95 cents in the change bucket tonight as a start.

In reading your thorough mathematical account I found myself curious to know what the bucket weighed before your visit to Coinstar.

I am kicking myself now for not thinking to take this measure before the operation.

We keep loose coins in an .... egg cup..... so never getting anywhere near the amount you collected. It serves mostly as a way to have coins available when charities come to the door for small donations. As we both have wallets that only take bank notes, we never have coins on us. Do charities go door to door in Canada, collecting donations (usually here it's someone living on our street or the next one, that volunteer for it, so a very distributed collection effort)?

From time to time we will have local children come by the door selling magazine subscriptions or chocolate bars as fundraising for their schools. And there is the odd time that a local charity will have a door to door fundraising campaign of the type your describe. But both activities have waned in recent years,