Regular readers will know — I hope — that a sentence starting “The thing about Ukrainian women…” is something you’re unlikely to find in these pages. I’m not prone to generalizing (at least about gender and national characteristics).

But, here’s the thing about Ukrainian women.

I’m just off an eight-day immersion in my newfound Ukrainian family: a day in the Kiev suburb of Brovary followed by a 9-hour drive across the country to my great-grandparents’ home villages of Serafintsy and Potochyshche and two days staying in the home my cousin Maria and her husband Roman. Followed by a 9-hour drive back to Brovary and two days spent touring Kiev.

So I’ve spent 8 days walking and driving the streets of cities and villages, and in the close company of Ukrainian women: my cousins Vasilina, Maria and Leisa, Leisa’s daughters Olga and Victoria, and Maria’s daughters-in-law Oxana and Victoria. We’ve gone touring together, talked (in a variety of translations) family history, everyday life and Ukrainian politics, and have shared innumerable seemingly-unending lovingly prepared meals of Ukrainian food.

And here’s the thing about Ukrainian women.

As I walked the streets of the country I was faced with women whose gaze, universally, seemed to reflect a stoic burden.

It’s hard to imagine, faced with this ever-present stoic gaze, that there would ever be a window to communicate beyond: it seems like an impenetrable emotional wall surrounds every woman in the country.

And, actually, the men too.

But here’s the thing about Ukrainian women (and men): once you’re around the supper table the stoicism gives way to an open-hearted smile, a warmth that reveals wit, candor, and a sort of all-compassing beauty that, when you first see it, seems completely improbable by contrast.

In eight days in the company of delightful Ukrainian women (and their men), I’ve seen — and bathed in the warmth and humour of — a welcoming spirit that’s equally hard to describe.

And that discloses the stoic gaze to be far more complex than I’d originally assumed: it’s not emotionlessness, but rather the front face of a fascinating and complex character.

Once you know what’s lurking beneath the surface, walking the streets of the cities and villages becomes a far more interesting experience, for you realize that in those eyes is, yes, the weight of the world, but also, with the inside face, a kind of deep engagement that makes our bubbly over-communicative North Americaness seem like a flimsy facade.

I will miss it. 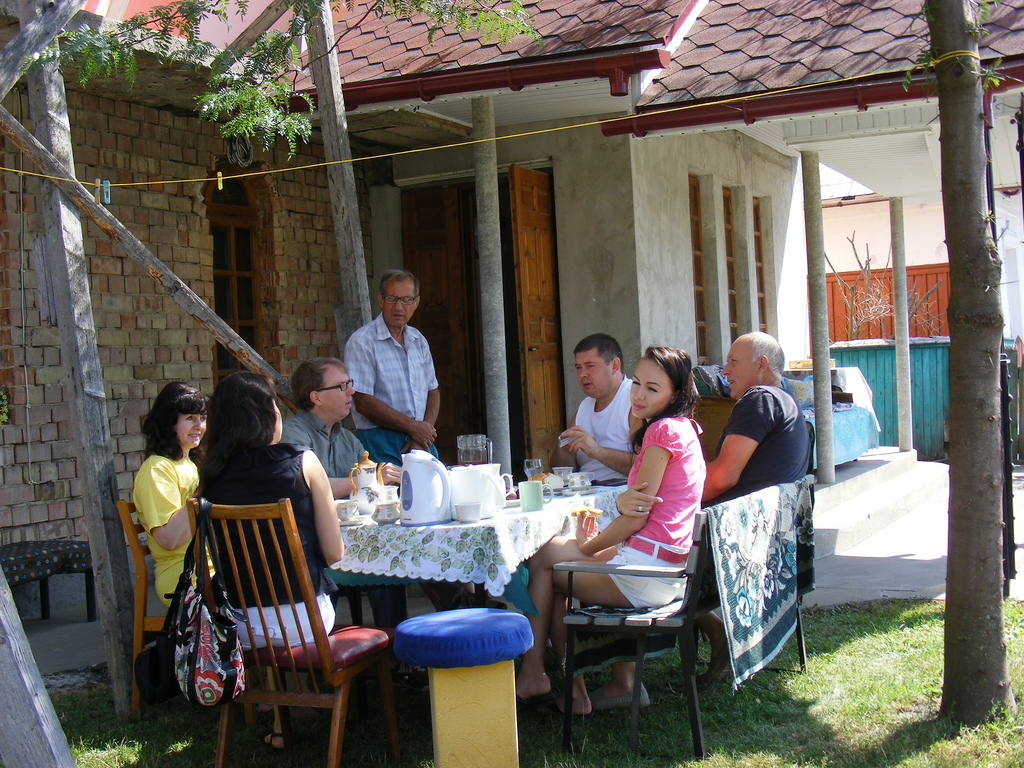 Know exactly what you mean Peter — we were all struck by this too. Maybe driven by history too? So dark and terrible and all were affected

What’s interesting about your descriptive observation is that it seems to reveal another type of writing/expression from you Peter. I like it.

But aren’t the North American and Ukrainian public faces both facades? Also, I wonder how much your notice of the faces has to do with not knowing the language. Anyway I agree with cyn.

On my first or second day in Thailand a couple teens in school uniforms came up to me to practice their English as an assignment for class. They asked what I thought was different about their country compared to where I lived back home. I pointed up and said “the sky.” It was a hundred shades of billowing gray and looking ready at any instant to let go a deluge. Seriously, though, “the sky”? I think I was just looking around at everything with wonder and special attention.

Good thing you had the warmth of the Ukrainian spirits to bathe in, I heard the water in the showers was quite cold! ;o)
It was so good to see Catherine and Oliver again, although we (esp. Oliver) missed Sally for the reunion. We decided you would have to set aside a few days for a visit with me and Sally next time you come to Denmark (more “seeing-time”, as Oliver put it :o) ).

Have you ever tried Ukrainian food? It is both healthy and very tasty. I strongly recommend you taste local food while your Ukraine vacation. In case you are not going to visit this Eastern Europe country, you can discover more about Ukrainian food in Ukraine travel guide http://ukraine-vacation-guide…. then look for online recipes and try to cook it at your home.

I came across your posts and have been reading them with much enjoyment and just soaking in the underlying emotion of the whole experience. Watching your videos, I can almost put myself in the picture so to say, and imagine myself there, standing on the street in Serafyntsi.
Hopefully, that is what I will be doing this July, 2013. I was hoping you might be able to help me somewhat. My Baba’s mother came from that village in about 1900. Their family name was Dika. I know Serafyntsi is not that large. Do you think you might be able to ask your relatives if there are any Dika families in the village now. My Baba’s mother’s name was Ustina.