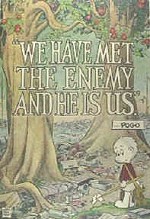 My brother Steve says that we’ve all grown older as a result of the “attack on America.”

There is no joy to be taken from the death of so many and the suffering of so many connected to them.

But I am heartened to see that people are starting to look at why this may have happened. Not why in a “crazy whacked out terrorists” way, but in a “how did we create a world where this is possible?” way.

People don’t sacrifice themselves for no reason. Let’s find out what it is. And if we did something wrong (no doubt we did) let’s apologize, ask for forgiveness, and then ask how we can do better. It’s clear now that when we screw up we’re going to feel it. And let’s not waste the unity in the rest of the world. We now have the attention of the leaders of all the other countries. We’ve got to find a better use for it than use it as an excuse to unleash our anger through military force. (read more)

And Michael Moore says this:

We fund a lot of oppressive regimes that have killed a lot of innocent people, and we never let the human suffering THAT causes to interrupt our day one single bit. We have orphaned so many children, tens of thousands around the world, with our taxpayer-funded terrorism (in Chile, in Vietnam, in Gaza, in Salvador) that I suppose we shouldnt be too surprised when those orphans grow up and are a little whacked in the head from the horror we have helped cause. (read more)

Maybe we are all so angry because we know, deep in our heart of hearts, that we are at least partly responsible for letting it all come to this. As it says in The Pogo Papers:

There is no need to sally forth, for it remains true that those things which make us human are, curiously enough, always close at hand. Resolve then, that on this very ground, with small flags waving and tinny blast on tiny trumpets, we shall meet the enemy, and not only may he be ours, he may be us.

So maybe we have grown older. But this doesn’t mean we have to sink on the weary weight of age: maybe this means we can take the maturity of age and use it to good end.

I have always maintained that with age comes wisdom. Let’s hope that’s true.

I think you’ve made a classic “Only in Canada” post, Peter. I don’t think the ideas you raise are the only ones that deserve to be aired after events such as have happened, but I do think they rank high among them. From the beginning and with increasing irritation I’ve listened and watched for anything like these thoughts on NPR and American network TV. Instead I encounter only rhetoric seemingly designed to squelch such notions from existence—and in a network anchor I have to doubt that this language springs from personal hurt, such as might keeps the mind muddied through 48 hours of continuous live coverage. I might have experienced some relief if I’d discovered Michael Moore’s comments before, but reading them now in your decontextualized excerpt I just find them rabid and ideological (which is what I expect from Moore). You’ve just floated the ideas soberly and sensibly. While you Canadians may not know how to blow things up as well as us, you do have your uses. Then again you gave us Peter Jennings.

While I agree with the sentiment as you [and others such as columnist David Swick in the Halifax Daily News] have expressed as to the real potential that the cause for this horror has been in part come from the Western world, it is still just a part of the entire issue. It is not contradictory to also say that we must now stop the effect so caused. If the terrorism has had as one originating factor, say, early support by the CIA, it does not limit the fact that it is in itself still deadly and mindless terrorism which in itself must be stopped. During the Falklins war, in which my mother’s best school friend’s son fought for the UK, the arms used by Argentine dictatorship which killed British troops had been supplied just a year or two before in large part by Maggie Thatcher. The resistance against that military dictatorship then was right despite the setting of of the problem in part by the UK. The same problem exists with Iraq. The West armed that country. Regardless, it is always right to look to the root causes of the complaints of the weak peoples of the world and thoroughly question ourselves why we have not done more to reduce their suffering. It is right to say we have to change how we deal with them in the future. It is, however, also right to attack those who — in the name (and likely only “in the name”) of those weak peoples — simply wreck havoc and engage in violence under the same claimed of cause. Further, very sadly, we have allowed and recently grown accustomed to radical and violent extremists relying on their claimed Christian, Islamic, Jewish, Shinto and Sihk faiths to justify their actions through the pretense of their faith and cause. We actually now associate faith and violent extremism, principles which are in reality in contradiction according to the tenents of all of these faiths. We can not longer oblige this pretense. If we have had a part in unleashing this horror — it still now attacks us. We Canadians, westerners, democrats, free people who can must help stop it.