Perched high atop the Confederation Court Mall, on the edge of the food court and occupying a space variously occupied over the years by all manner of businesses, Oliver and I came across the T2 Tea Company this afternoon.

We poked our head in the door, tentatively, and were warmly greeted by the proprietor, Liwei Han.

She questioned us about our tea preferences, and when she heard that we like green tea, she guided us to some newly-arrived Zhuyeqing green tea from Emishan in China.

“Do you want to try some?” she asked.

When we said we did, she guided us over to a tea sampling area, motioned for us to sit on the two stools in front, and then brewed up a batch of the tea, carefully measuring the tea, boiling and then cooling water to 85ºC, and steeping it for 2 minutes. The tea is fascinating to watch steep: it looks like a forest of tiny green cigars.

We quite enjoyed the tea when it was ready to drink, and had three tiny cups each.

The quality of the tea, of the instruction, and of the conversation, was such that, when all was said and done, the only logical next step was to buy a tin.

It’s not cheap: $57 for a tin of 20 sachets of tea. But, then again, as each sachet can make two batches, and each batch can be steeped twice, that comes out to only 71 cents a batch.

I asked Liwen how business was doing, and she said, diplomatically, that there are many people who like tea, but many of them are not on Prince Edward Island.

If you are interested in tea, and interested in meeting someone who is obviously passionate about it, and about sharing her love with others, drop by T2 on your next trip downtown. She is open 10:00 a.m. to 5:30 p.m., Monday through Saturday.

I wanted to be sure to remember the instructions we were given for making the green tea, and for the sample of fragrant oolong “rock tea” that we were given on the way out, so as soon as we got home I sat down and sketched them out. 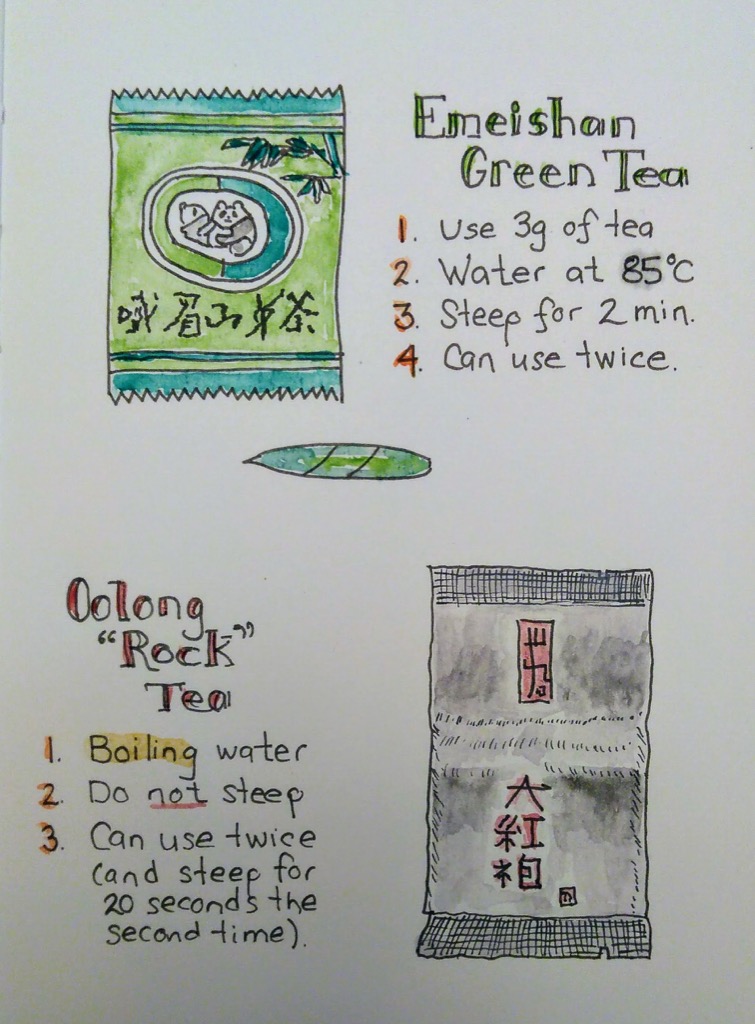