Oliver and I drove up to Rollo Bay yesterday for the PEI Bluegrass and Old Time Music Festival.

It had been more than 30 years since I’d been at a bluegrass event: the last time was in Carlisle, my hometown, where I used to sell The Hamilton Spectator tent-to-tent. Oddly, I don’t remember much about the music, and I certainly don’t recall enjoying any of the music that I heard.

But somewhere in the last 5 years the bluegrass-enjoyment-switch got turned on in my head, and these days it’s some of my favourite music. So the opportunity for some full-on bluegrass action so close to home was irresistible.

Bluegrass festivals are a world unto themselves, and that world is very recreational-vehicle intensive. Here’s what the festival site looked like: 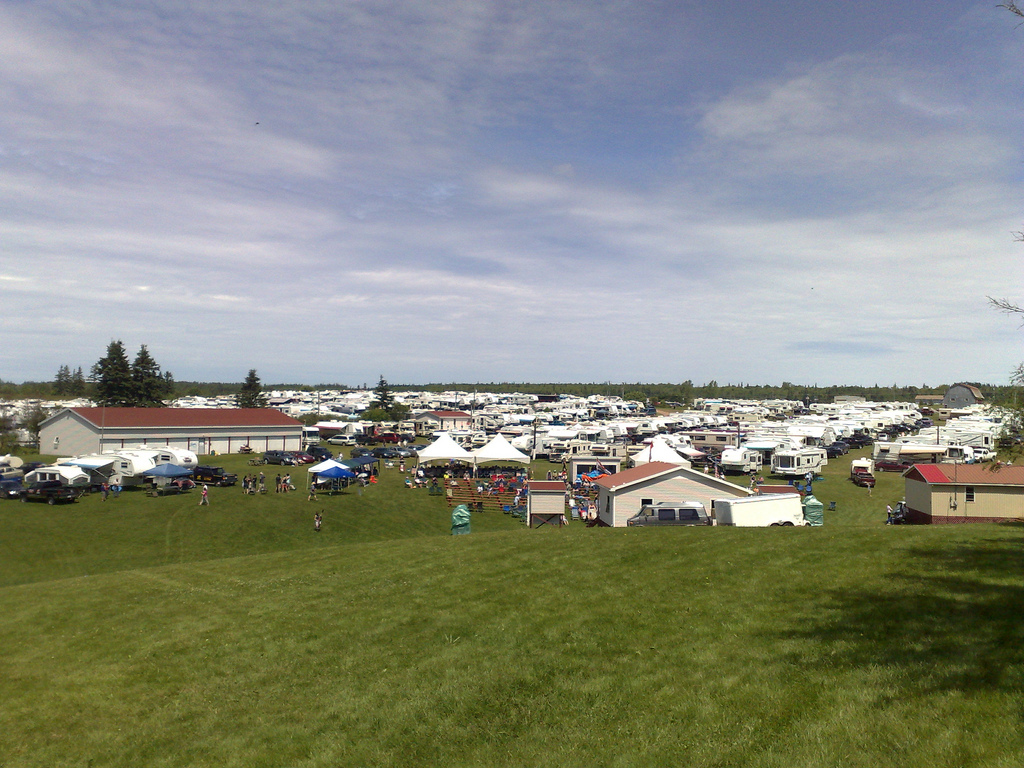 RVs stretch for as far as the eye can see. And these are not modest RVs: they’re set up with awnings, outdoor patios, satellite television dishes. And you get the sense that there’s a traveling convoy of bluegrass aficionados that roam the continent every summer, festival to festival, as there’s a lot of socializing and camaraderie happening out of the stage area proper.

My favourite part of the day was the workshops, held inside in Ceilidh Hall (it’s the large building on the left in the photo above). We saw parts of the banjo and harmony workshops, and I think I learned more about music in that 60 minutes than I’ve learned anywhere else. Here’s a snippet of the harmony workshop offered by Barry Scott & Second Wind:

We also got to see some main stage acts: when we first arrived PEI’s Bluegrass Revival had just gone on stage, and we watched their entire set, and then saw parts of Country Grass Band, Norman Bowser & John Jeffreys, The Spinney Brothers and Simply Blue.

To Oliver’s great dismay we had to head back to town before Grass Mountain Hobos went on stage (they’re his favourite bluegrass band; perhaps his favourite band of any sort). I had to promise him that we’d track them down again before the summer’s out, which might prove challenging as they’re off to the United Kingdom for the rest of July. We’ll have to work hard to find them somewhere in August.

All in all a great way to spend the day; we’ll be back next year.