I went along to the Joe Moakley Courthouse at 2:00 p.m. to attend a hearing in American Arab Anti-Discrimination Committee, et al. v. MBTA. It was my first time in a working courtroom, and my first non-Law and Order experience of the U.S. court system.

Apparently (from the several mentions made in the hearing itself), federal courthouses, although open to the public, have been deemed a special area where citizens must consent to search of themselves and their belongings to gain entry. At the Moakley Courthouse, I had to check my laptop, camera and cell phone. This left me with the clothes on my back, and a pen and paper. Kind of comforting, actually.

The hearing was in Courtroom 9, on the third floor. The Courthouse itself is a even more stunning inside than it is outside. Of course you’ll never know that, because I couldn’t take a photo. But here’s the outside: 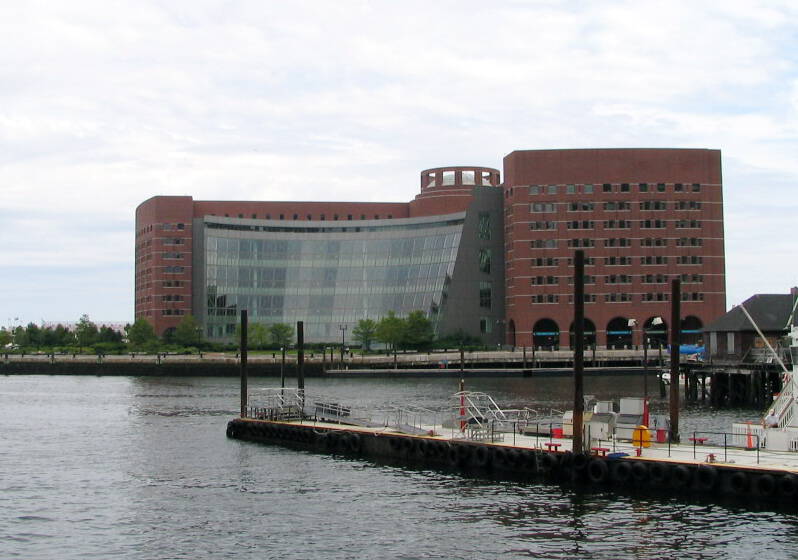 While I was waiting for the hearing to begin, I had a chat with a local radio reporter. He was convinced the judge wouldn’t grant the injunction against searches on subways and buses because, he said, “no federal judge would ever do something anti-security in this day and age.”

When the courtroom opened, shortly before 2:00 p.m., it quickly filled up with various reporters, supporters (of both sides) and members of both legal teams. At the top of the hour the clerk said “All Rise,” and Judge O’Toole entered.

Right off the top there was a request from the plaintiff (representing those seeking the injunction) to “approach the bench” (who knew this actually happened?). Much to my surprise, we in the audience could pick up bits and pieces of what was being said, although I couldn’t make any sense of it.

It became evident later on that the result of the “approach the bench” session was to narrow the scope of the hearing to just the searches on the Orange Line at Haymarket and Community College stations, and on the buses that pass along the I-93 expressway when it’s closed to other traffic.

After three or four minutes of this, everyone returned to their seats, and the judge heard from Michael Avery, for the plaintiff.

After prefacing his arguments by saying “on the surface” the practice of searching “seems reasonable,” he went on to explain why, in the view of the plaintiff “after more thoughtful analysis,” it isn’t.

The heart of this issue, from his perspective, is the Fourth Amendment:

The right of the people to be secure in their persons, houses, papers, and effects, against unreasonable searches and seizures, shall not be violated, and no Warrants shall issue, but upon probable cause, supported by Oath or affirmation, and particularly describing the place to be searched, and the persons or things to be seized.

He characterized the MBTA searches as “suspicionless searches” and suggested they were unreasonable because:

He characterized the threat as “not substantial or real” and said that the searches were not “measures properly calibrated” to the threat.

He went on to describe the harm the searches inflict on what he called “Fourth Amendment Values.” Those being searched, he said, can refuse to be searched, but this results in being ejected from the transit system, possibly many miles from their destination. He said that the “physical exposure of possessions” is intrusive and intimidating, especially with “the way Boston Police are dressed these days.”

He concluded by asking that the injunction be enjoined.

Mr. Avery’s remarks were followed by a brief dialogue with Judge O’Toole, who posed a hypothetical question about whether, if it were helicopters (subject to the special provisions regarding search given air travel) involved instead of subways, would the objections stand. Avery’s response to this was to suggest that there is a large difference between air travel, which for most people is not a component of their everyday life, and public transit, which carries 1.1 million Bostonians a day through their daily lives. In other words, people who don’t want to be searched don’t have the practical option of “opting out.”

With this, Mr. Avery concluded, and Rudolph F. Pierce spoke for the MBTA, the defendent.

Mr. Pierce opened with the statement that “the MBTA doesn’t want to go out of its way to interfere with civil liberties” but said that the risk involved requires what he called a “measured response.”

Pierce said that the law recognizes “administrative search” and he questioned whether the characterization of the threat at hand, by the plaintiff, as “non-specific” was relevant: “how specific does the threat need to be?”

Pierce went on at some length about how the special circumstances of the Democratic and Repulican conventions demand special arrangements like the transit search, and said that were the MBTA to not have acted it would have been accused of “putting its head in the sand.”

He said that the MBTA had “taken measures to inform the public” and used a poster, brochure and newsletter as evidence of this: 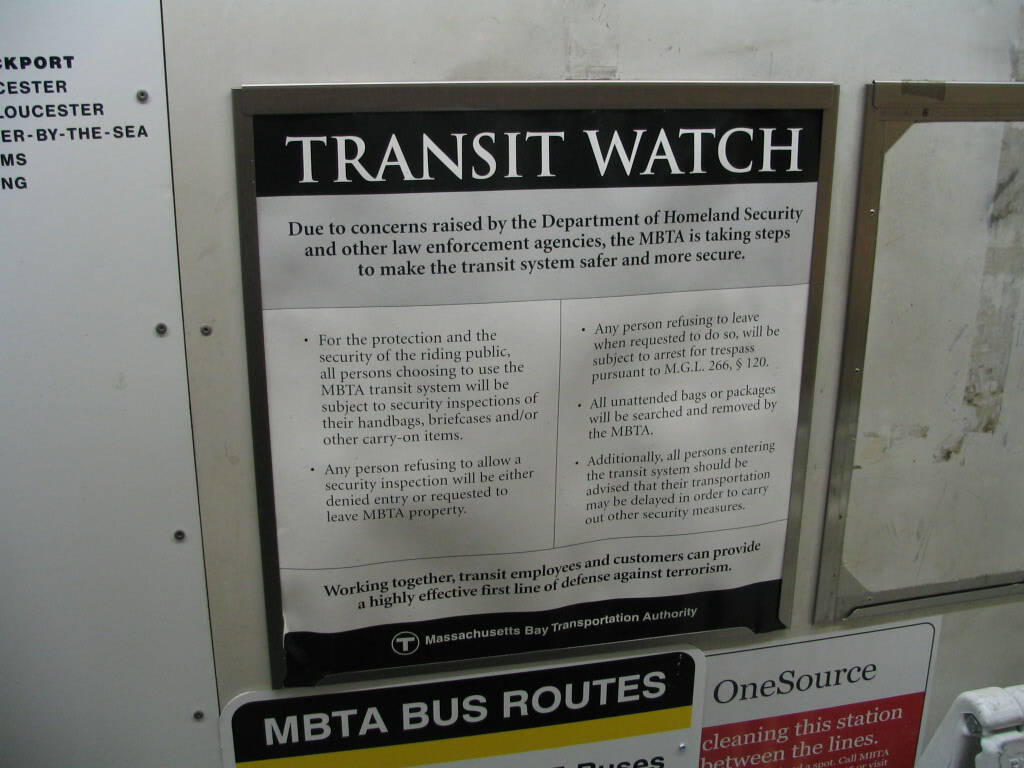 At that point the Judge interjected, and there was a back-and-forth about whether the specific measures taken on the Orange Line represented a different practice than that taken on the rest of the transit system. Pierce said it was “part of the same policy” — that the policy allowed for search of any bag anywhere on the system but that the Orange Line represented a special area of interest. The Judge asked whether it would be appropriate, perhaps, to bring in representatives of the Secret Service, Dept. of Homeland Security or the FBI if in fact the special Orange Line measures were “ordered” by one of those agencies.

Pierce summed up by saying that “the court has to recognize that we are in different times” and that “police in a civil society need to do everything they can.”

Before concluding, Mr. Avery was allowed an additional comment, and that was that the 4th Amendment was passed when “the new republic was hanging in the balance.” He characterized the 4th Amendment as being conceived of precisely for times like these — a measure, in other words, to ensure against unreasonable measures during “different times.”

At the close of the hearing, the Judge said he would “take the matter under advisement” and adjourned.

Critics of the PATRIOT act say that it renders 4th amendment protections effectively dead. Nice to hear that at least there are still a few people who think it’s worth keeping.

Congratulations on such a first court room experience.

I didn’t realize the proceedings were open to the public. Wish I had gone.

My take on the matter is here