In 1972 my parents moved our family – mom, dad, brother Mike and me, and twin brothers Johnny and Steve in utero – from Burlington, Ontario “out to the country” to the small village of Carlisle, about 30 minutes north.

Catherine, who grew up on a bona fide farm, with sheep and cattle and guns and silage, has long-disputed my calling Carlisle “the country,” and she’s probably right. But, in their own way, my parents were going “back to the land,” and Carlisle wasn’t, yet, the suburbs: it was a small village with a post office, library, gas station, bank and store and about 400 people. Here’s a sketch I made of my childhood psychogeography a couple of years ago: 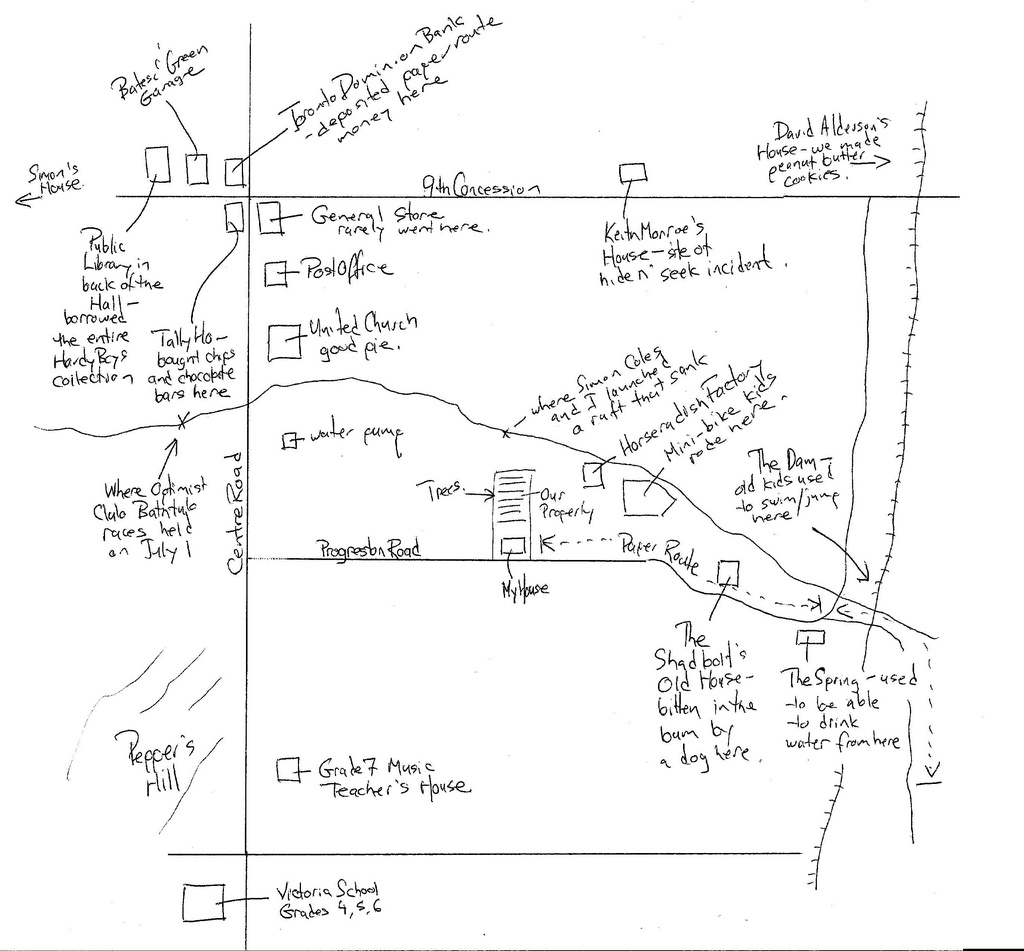 Shortly after we moved to Carlisle construction started a few miles north of us on something we always called, for a reason I’ve never understood, “the survey.” This represented the coming of the suburbs to Carlisle, with modern homes, central water, and a cookie-cutter architecture that has since covered most of southern Ontario. Here’s a map of Carlisle showing our land in red, “old” Carlisle in yellow, and the survey – surveys, really, as there have been several over the years – in blue: 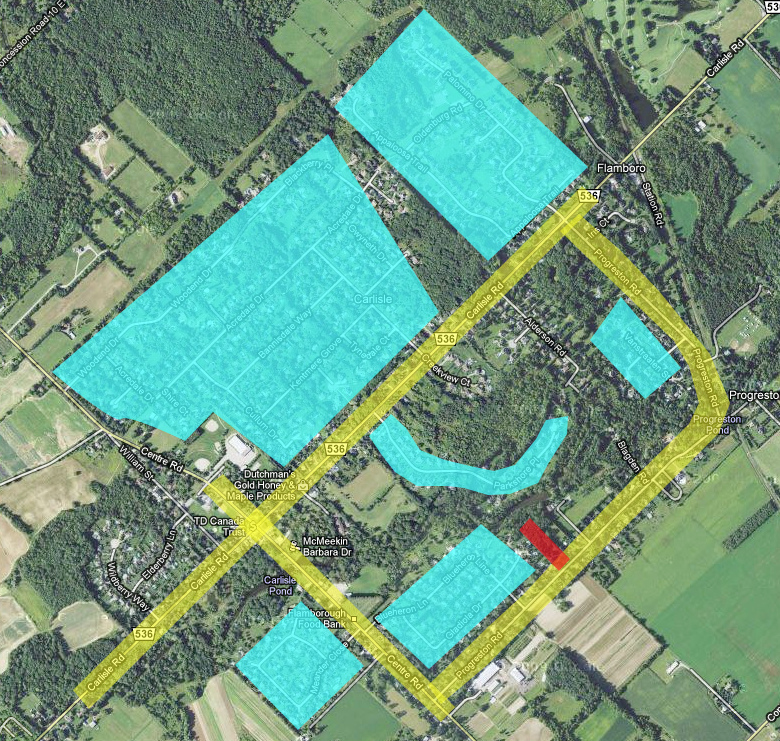 The “central water” part of the survey, which required a central well and water tower, inspired my parents and their neighbours, the de facto “old time” residents of the village, to protest and I vivid have memories of petitions, meetings and rallies. Those are my earliest memories of “activism” of any sort.

The water situation got resolved somehow, and after a year or so the first round of houses in the survey were done, and new families moved in, and so the “kids from the survey” – we really called them that – started coming to school with us.

For all intents and purposes the survey kids were probably more like us than they were different from us – mostly middle class WASPs –  but nonetheless there were cultural differences that extended beyond their fancier houses and more exotic birthday parties: the survey kids had summer cottages and went to Florida in the winter.

Not all of them, of course. But if a kid at my school was headed to Florida for March break, dollars to doughnuts they were from the survey.

We didn’t have a summer cottage, and we didn’t go to Florida in the winter.

Well, once we went South Carolina, which was pretty close. But really “not going to Florida,” in our family, meant “not going to Disney.” Disney was, after all, really the only reason any kid would want to go to Florida.

I don’t have a strong memory of why the notion of Disney seemed so alluring – this was the Jiminy Cricket era of Disney, after all, decades pre-Pixar.

Maybe it was because, under the psuedo-back-to-the-land regime with the chocolate chips replaced by carob, a black and white TV when everyone else had colour, and my parents convinced that we boys needed to “learn the value of hard work,” going to Disney represented a sort of bourgeois heaven. Disney was alluring because to my parents it was completely unalluring.

I relate all this because next week, during March Break for Oliver, he and I are flying down to Tampa to visit with my parents, who’ve been there all month. It was a last minute decision that we sprung on them only this week after a US Airways flight from Halifax that didn’t require a second mortgage on the house showed up.

On learning of our plans, my father emailed “I assume you’ll want to take Oliver to Disney World.” Which, to be honest, hadn’t occurred to me.

Assuming that the socialist fires still burned at the core of his heart and that he was only being nice, I emailed back and asked if they really wanted to go. “You bet! When would you like to go?” my dad wrote back.

We’re all older now and have shifted up in generational responsibility. We can eat all the cookies we want, all of we brothers have cupboards full of chocolate chips with no carob in site and deluxe colour televisions in our living rooms. And my parents have spent a few weeks in Florida for several winters now, so it’s no longer a mysterious promised land.

But somehow the notion of a family visit to Disney World seems like the toppling of a familial Berlin Wall. And in a strange and somewhat disturbing way, completely at odds with my deeply-rooted political beliefs, I find myself quite excited by the prospect.

Finally, after all these years, I’ve become a survey kid.

Made my first-ever trip to The World in September (that’s when I could get my Aeroplan pts to work), at the tender age of 53, with spouse and eight year old. I highly recommend the tear-out touring plans in The Unofficial Guide to Walt Disney World, also avail. online (for a price) at TouringPlans.com. Followed them almost to the letter, and avoided the lineups. Not to miss: Toy Story Mania and Buzz Light Year rides, Soarin’, Test Track, Mission: Space, Kilimanjaro Safari.