Last night I found myself in the café at the FNAC store at Norteshopping listening to a group of musicians who call themselves Oddawn provide live music for a showing of a film called Comboio de Sombras by director José Luis Guerín. It was a chance encounter, and the music was beautiful; I recorded a couple of audio snippets on my phone (hence the poor quality that does only vague justice to the music and the musicians). 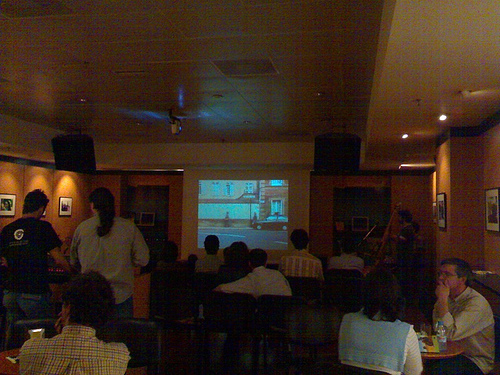 Trying to figure out just exactly who Oddawn is, and where I can get some of their recorded music, has proved something of a challenge. The group is described here as follows:

This appears to translate to something like this (courtesy of Google Translate):

Music is light or black, it is color or cinereous, it is silence or movement, it is rugosa, cold or hot, or, so only, pure feeling. Oddawn intends to be everything this, in the portion of the time of its existence.

That doesn’t exactly clear things up. The members of the group, as of 2004, are listed as:

In other lives: vocalist Helena Guerreiro appears as part of group Trama in this recording of Caso Fora d’Horas / Sugar Cloud; accordion player Florbela António is part of the group Le Partisan (MP3s here); and standup bass player Henrique Fernandes is one of the Lost Gorbachevs. Everyone else appears to be, at least as far as the web is concerned, anonymous.

If you happen to know more, and can point to people or MP3s, please let me know. In the meantime, if you happen to be in Porto tomorrow, May 22nd, you can catch a repeat of the event at FNAC in the Gaiashopping mall at 17h.

I’m Helena from ODDAWN
Thank you for enjoying our music.