Late last week I received an email from our Executive Director at Stars for Life asking me if I could attend a meeting of the Standing Committee on Education and Economic Development this morning as our Chair, Carolyn Bateman, presented a “briefing on conditions for people with autism in PEI.” I happily agreed, and went along just before 10:00 a.m. this morning, assuming I’d be shown to a seat in the public gallery from where I could offer my (silent) moral support to Carolyn as she presented.

When I arrived in the legislative chamber, however, the Committee Clerk told me that, “as a witness,” I’d be sitting “inside the rail,” beside Carolyn, in chairs facing the chair.

If you are a student of the Legislative Assembly you will realize that “the rail” represents the dividing line between the profane and the sacred, and traversing the rail a ceremonial act of ascendance. Not a place, in other words, for the everyday likes of me.

Fortunately, the rules of Standing Committees are somewhat more relaxed than the rules of the Legislative Assembly when it’s in full-throated session, and so although there was still a prohibition against non-witnesses crossing the rail, we were allowed to address members by name, not district, we could speak directly to questioners, rather than through the chair, and the entire operation was more probing than jousting.

If you are so-inclined, you can listen to what happened next on SoundCloud, as our testimony was recorded and archived there for posterity (there’s also a video stream, but I believe this is more ephemeral, and that link might not stand the test of time).

Carolyn did an excellent job at making the case for sustainable, long-term, sufficient funding for Stars for Life, and the larger discussion about how we support people young and old with autism toward full citizenship was wide-ranging and positive. I was impressed by the questions the members asked, by their willingness to admit what they didn’t know, and by their understanding that we can move forward, to begin, simply by coordinating the approaches we’re already taking in a way that focuses on the individual, not the bureaucracy.

Through the 90 minutes there was frequent reference to the never-adopted “Autism Action Plan” from 2009; fortunately a PDF of the draft plan still exists in a corner of the province’s website, and I encourage you to read Recommendations Toward A Prince Edward Island Autism Action Plan: Another Piece of the Puzzle. Much of what I tried to emphasize today in my comments was much better summed up by the committee that formulated that draft in its recommendation on internal communication:

Once the trans-departmental governance structure and process is ascertained, clear and sustained channels of communication will be the glue that holds the structure together. While the Ed & ECD has had an unofficial strategy from which to work, the lack of a published strategy and policies have left various stakeholders to deal with service design and delivery with a level of uncertainty. Driven by an ‘officially’ adopted Strategy, interdepartmental communication and service delivery will be strengthened at all levels in the departments, from front-line service providers to managers, Directors and Deputy Ministers. Measures to improve internal communications need to focus on:

If we had followed that recommendation in 2009, we’d be in a much better place today; I was encouraged that the members of the Standing Committee seemed to understand that, and, somewhat against type, I have hope for what comes next. 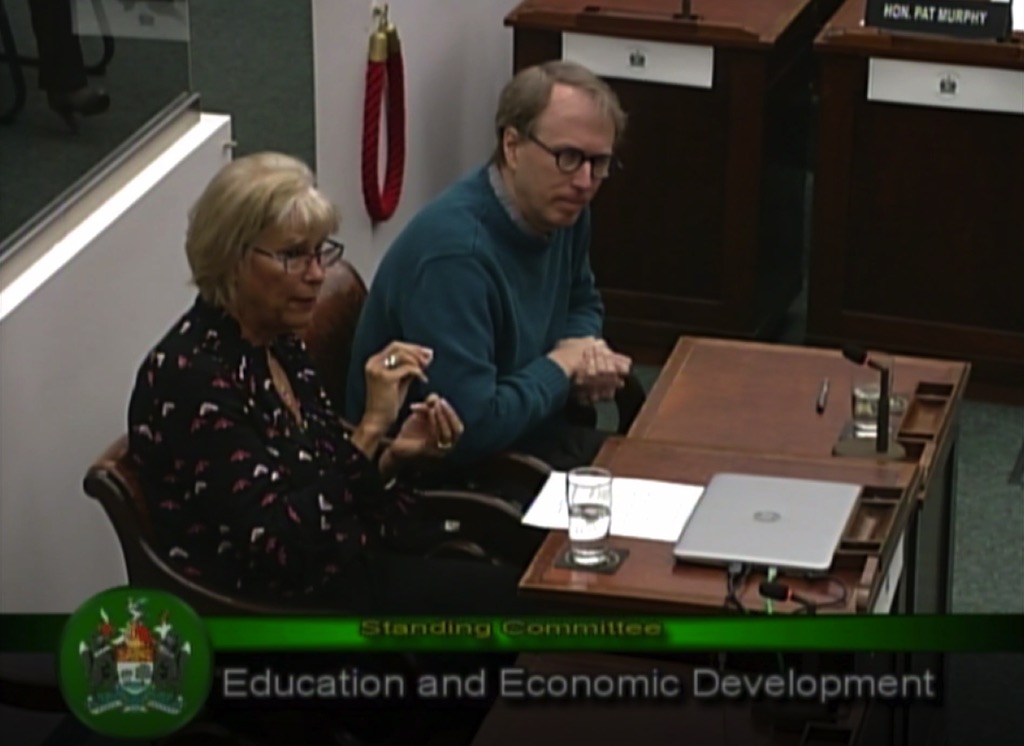 Well done, sir. All issues should have someone so capable of representing life in that realm. I watched the video and was surprised to see that you were rhyming off the various health/education touch-points without any notes.

I also appreciated the calm, rational, approach, and the lack of any "won't somebody think of the children!" hyperbole.

"If you are a student of the Legislative Assembly you will realize that 'the rail' represents the dividing line between the profane and the sacred, and traversing the rail a ceremonial act of ascendance. Not a place, in other words, for the everyday likes of me."

Sacred? Hilarious! And the "likes of [you]" have every right to be there. In fact, you are there, through your representative who works for you.