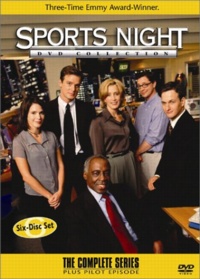 The ABC television programme Sports Night ran for two seasons, from 1998 to 2000, was a great show. And that comes from me, who is more likely to watch yak hearding than to watch anything remotely associated with sports on television.


I was introduced to the show by an article in The New Yorker, which discussed at length the struggles of creator Aaron Sorkin with ABC about whether or not Sports Night would air with a laugh track (he didn’t want one, ABC did).


Like Taxi before it, Sports Night was a niche show, with a limited audience, and was never a big hit. But, also like Taxi, it launched the television careers of many of its stars. From right to left in the picture above:


Sabrina Lloyd has popped up this season on the NBC series Ed.


Peter Krause, perhaps the most successful alumnus, is playing Nate Fisher on Six Feet Under (I’ve been trying to write about that show for the past month, but I can’t find the words; the third season starts Sunday in the U.S. on HBO and Tuesday in Canada on The Movie Network).


Veteran actor Robert Guillaume didn’t need a career bump, of course, having starred on stage, screen and television since 1966, perhaps most popular for his work on Soap and the spin-off Benson.


Felicity Huffman, arguably the best actor on Sports Night, hasn’t figured prominently on television since that series, save for a part on the aborted David Kelly-created Girls Club. Of course she’s also been busy having children with her husband William H. Macy.


Josh Malina is the “new Rob Lowe” on The West Wing. As Rob Lowe sinks out of the show, and becomes one dimensional and given a poofed up hairdo in the process, Malina is growing into his part here, and promises to become an integral part of the show.


The only career that appears to have gone nowhere from the Sports Night push is that of Josh Charles. First seen in Hairspray and Dead Poets Society, Charles played well on Sports Night, but has only had bit-roles in movies since, like “Agent Barker” in Muppets From Space. Not the stuff great careers are built on.


You can purchase the DVD of the entire two seasons now; if you missed the show entirely, or need a dose of good television comdram in the Sargaso Sea of reality dreck, it would be a worthwhile investment.