If you’re a North River Road regular, you’ll know that we’re getting a The Home Depot in Charlottetown. Squeezed in between North River Road and the Wal-Mart. And leaving Sporting Intentions, the sporting goods store next door, dwarfed in the empty space inside the ‘L’ formed by the behemoth taking shape next door.


Oliver and I decided that we needed to support Sporting Intentions in their hour of need, so we dropped in yesterday and bought a Nalgene bottle (a bottle that Dan says in unbreakable and doesn’t take on 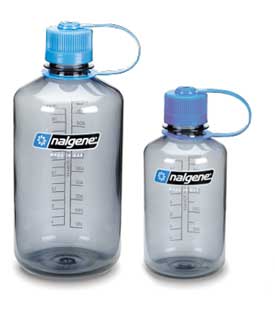 smells or odours of its contents, thus making it eligible for extreme testing by our small family).


We were well-served at the store: the staff-to-customer ratio, including Oliver as a bona fide customer, was 3 to 1. And the staff were helpful, witty, and willing to entertain and enhance Oliver’s eccentricities (i.e. they all went to the back room to get their Nalgene bottles when Oliver asked, repeatedly, “where you bottle?”).


Although I am unfortunately sedentary by nature, I do aspire to sporty greatness (something that will be put to the test next weekend), and I have a sudden urge to outfit myself with sea kayaks, winter-ready pup-tents, and all manner of mountaineering first aid equipment every time I go into stores like Sporting Intentions. We were lucky to escape with only a Nalgene bottle.


If you, as I, would feel like Charlottetown would be less of a place without great local retailers like Sporting Intentions, and you want to make a small protest against the incursion of Giant American Retail, perhaps you could do as we did, and drop in for a spot of Nalgene this week. Tell them we sent you. And tell them thanks for sticking in there.

I’m sure you’ll love your nalgene bottle(s?) — the swimmer and the aqua-fitness instructor in the house both are big fans. They do suggest the wide-mouth version as it is easier to through a few ice-cubes into if you forget to do the ‘freeze a bit in the bottom’ trick.

Peter,
Just a little note to support the Dan’s claim that they are “unbreakable”…my roomate is a construction worker and had his Nalgene bottle run over by a Schurman Cement Truck one day while on the job…the result… only a few small scratches and a slightly warped plastic top.

This is just a side note to your blog in early July 2004, regarding the purchasing of Nalgene Bottles at Sporting Intentions:

—-THEY ARE MADE IN THE UNITED STATES OF AMERICA—-

I like your idea of shopping at locally owned/operated stores. However, isn’t it somewhat hypocritical of you to be promoting to Islanders the idea of ‘buying local’, when you’ve purchased products that are made in the USA? The American economy is still making money off of Canadians no matter if these products are sold in ‘Big Box/American Retail Giant Stores’ or smaller Island owned/operated stores. Perhaps you should promote to Islanders that they should really buy locally — that is, they should buy products that are produced here, at home.

In saying that however, I will rant now on just how great and durable the American made Nalgene Bottle really is! I purchased one, just days before my 6 week backpacking excursion across Europe 8 months ago, and I am pleased to say that it is still in working order. It has some scrapes and scratches, and some pretty yellow paint from Paris, France on it, but it’s still as good as new. This ‘unbreakable bottle’ really is unbreakable, just as Chris commented on July 5, 2004. My bottle has fallen off of the roof of my car several times, and has been driven over too. And also, for some miraculous reason it never gets smelly either!

So, how did I find this blog? I came across it while in search of a “Sporting Intentions” website. To my dismay, they don’t have one yet — guess i’ll have to drive my way down ‘American Retail Giants Blvd.’ until I find the great little locally owned/operated shop I’m looking for!

Nalgene Unbreakable You Say???
Today I decided to try a little experiment that my pilot friends and myself conjured up on the flight line today when we were flying gliders. My friend, the once proud owner of a Nalgene bottle claimed that there was no way that I could break his “ultimate” bottle. Being the experimentator that I am, I decided that I would try and disprove him.

When I returned from the gliding operation, I decided to see what would happen if I tossed it out at 1000 feet above ground from an airplane. I manuvered mysele over the runway, and let er’ rip. I watched for those few fateful seconds as the bottel tumbled towards tera firma… would it break, or would it stand the test. When the bottle finally contacted the runway, a splash erupted from the impact that was so large that it was visible from my elevated viewpoint. But this did not yet answer the question… we weren’t asking if the lid of the bottle broke… we wanted to know if the bottle itself was destroyed.

When I landed shortly thereafter, I raced to the site of the impact to see what had happened… my friends once trusty and unbreakable bottle was reduced to a cracked lid and a bottle that was split across the base. Due to the marks on the bottles surface, and not to mention the impression in the tar and chip runway surface, I deduced that the bottle impacted the runway in a perfectly horizontal orientation.

So, although they are for the most part a very strong bottle… they are by no means unbreakable.

I dropped my Nalgene bottle in my office… this resulted in not complete devistation but a minor crack just below the neck of the bottle. My question is Does Nalgene replace bottles that have broken within the constraints of the durability advertised?