Charlottetown’s annual outdoor art festival, Art in the Open, sputtered to life yesterday for its 10th anniversary. Between the pandemic and the threatening (and then actual) rain, people were much fewer and far between, and much of the joie de vivre was bleached out of the event, exposing more starkly what we’d known all along: it’s as much about experiencing art in community as it is about the art itself. Without the community, it was a lonely, damp evening.

Although the annual Crow Parade was covided out of the festival, participants were encouraged to continue to casually dress up as crows; Oliver was one of the few to step up, reprising his costume from 2019, and adding a bovine element (hence “coo” rather than “caw”) as an homage to Russell Louder:

Despite the scant crows, the damp, and the sparse participation, there were highlights.

Norma Jean Maclean’s Work, in the oval at Confederation Landing Park, “a performance about day-to-day physical acts, searching for meaning in the mundane, and ultimately the processes of doing and undoing” was inspired.

Nine Yards’s Alone Together was intended as an installation, but was just as interesting as a performance piece, as we ambled along as it was being last-minute assembled (we returned later in the night and were able to walk inside and feel it pulse and rumble): 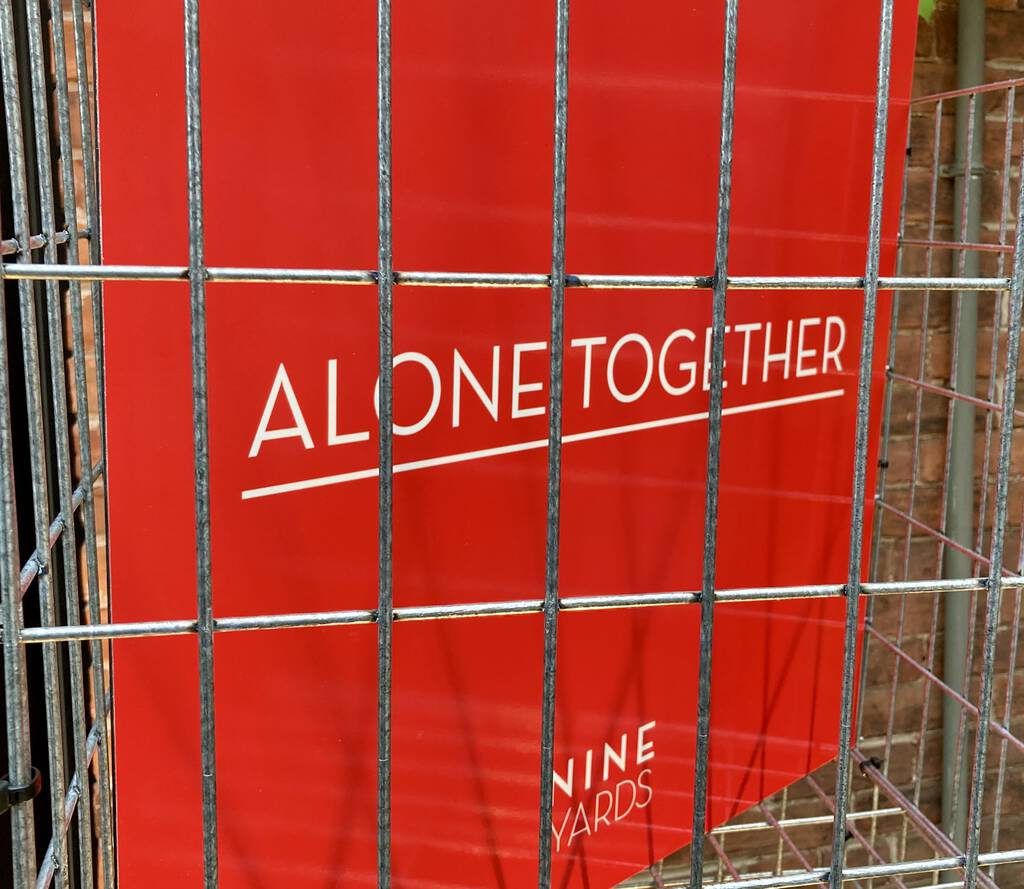 Hannah Bridger’s Wind Farm, on the great lawn in Victoria Park, was an interesting rumination on the wind: 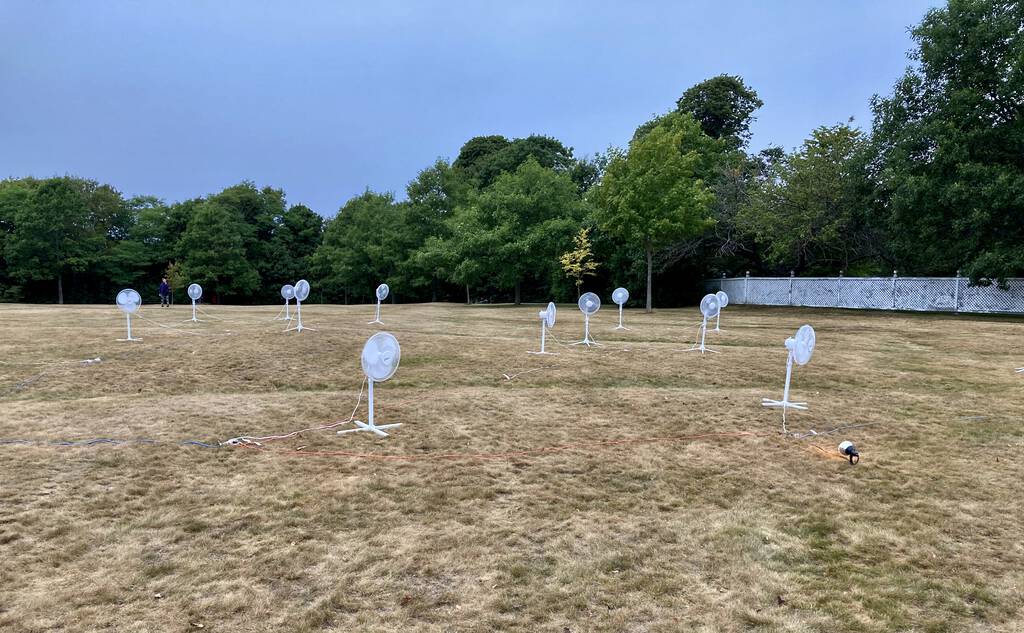 I have long-admired Sandi Hartling’s work, and her anything at all, in the windows at the Confederation Centre Art Gallery entrance, was playful, especially in that (reflective) setting: 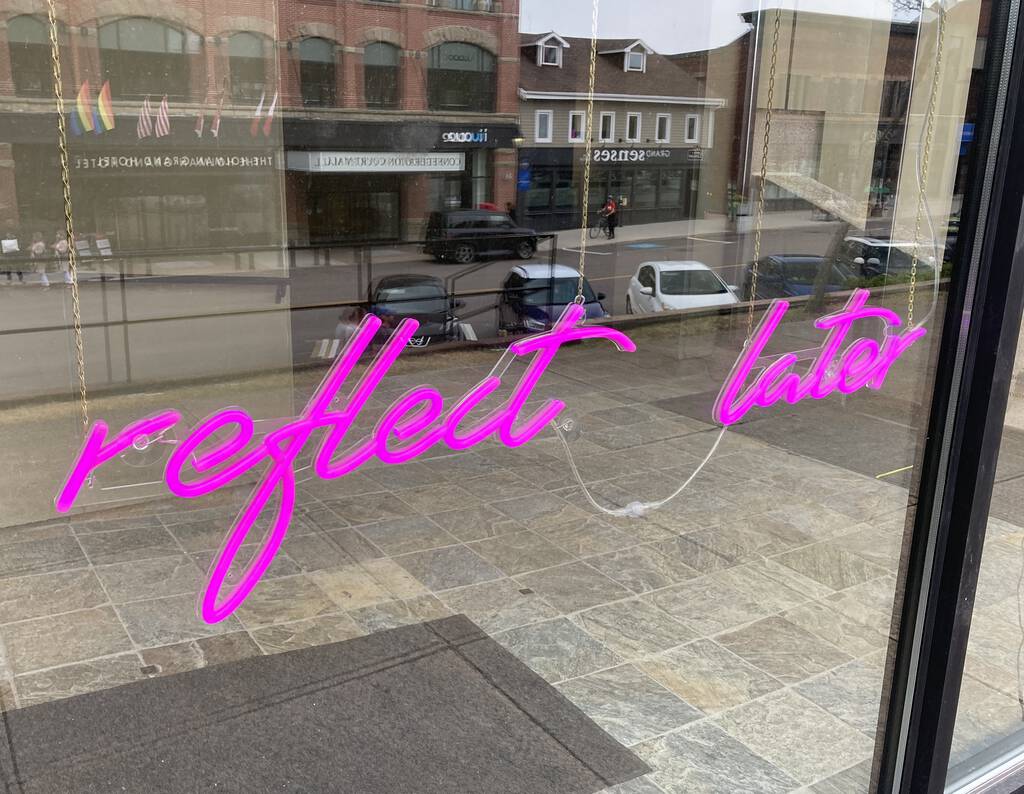 Detail from “anything at all,” Sandi Hartling, Confederation Centre of the Arts

By 6:30 p.m. the rain had begun in earnest and we’d done the waterfront-downtown-park loop. We ordered a pizza, paid one more visit to Nine Yards, and headed toward home.

On the way there we passed evidence of Becka Viau’s Revolution, wherein she rolled a round hay bale about the city. It was perhaps the piece that best summed up the contemporary zeitgeist. 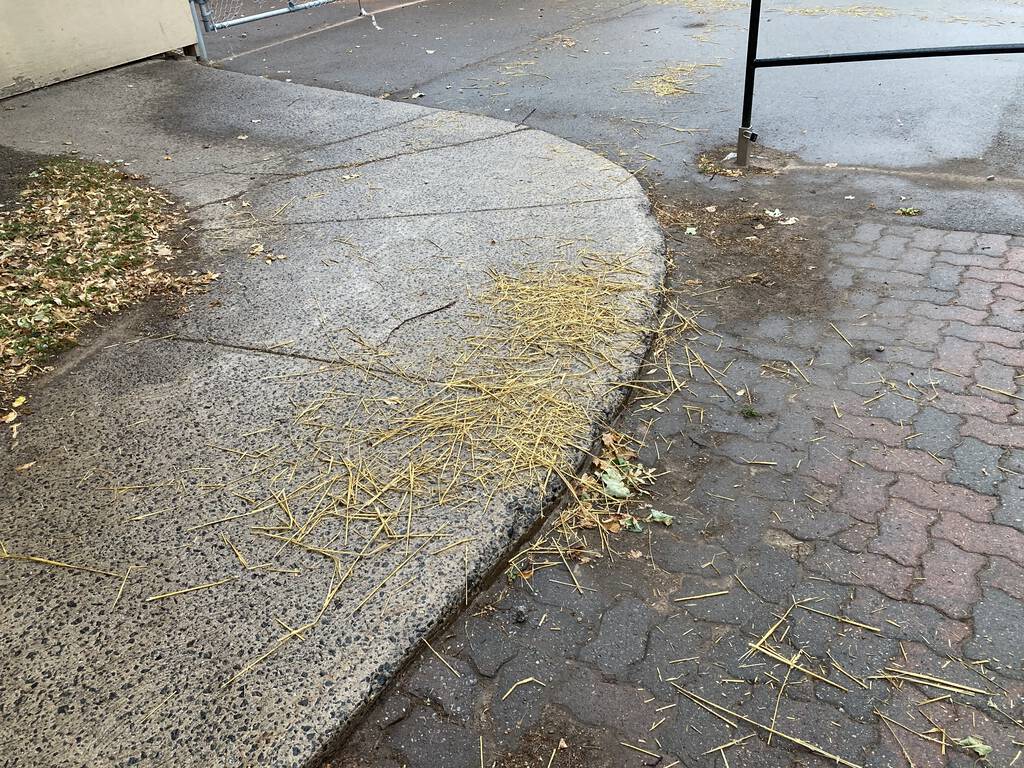 We picked up the pizza and sought shelter at home for our regular Saturday Movie Night; Oliver insisted we watch a movie with an artistic theme, so we settled on The Best Offer.

I’m used to returning home from Art in the Open with a feeling for the endless possibility of the human endeavour; that feeling escaped me yesterday, replaced with a more basic satisfaction that art can perservere even in fraught times.

Thanks for sharing these. What gave me hope in watching the videos was that people were not wearing masks--perhaps some day that will be the case again in Vermont. Being an island has so many perks.

There were a lot of people wearing masks otherwise. I suspect the Nine Yards staffers consider themselves a kind of “work bubble” which is why they weren’t.

You noted, I hope, that Oliver the Crow-Cow was wearing a mask you made!

Ah yes, now I do recognize it! I should have sent him one with more crow bling.

You forgot the Labyrinth part (The Hat).

Was it under-promoted? I regrettably missed it this year as I only vaguely knew it was happening.

I love Oliver's costume. Cows and crows being two of my favourite creatures, I support more cow/crow crossovers. Thank you for sharing your AITO experience for those of us in exile.