In the shadow of our legislators debating the relative PISA exclusion rates of Kazakhs vs. Prince Edward Islanders in the Legislative Assembly, I was asked on the street, by a prominent local business leader, what I thought of the PISA test results, released last week with much fanfare.

Let me answer here with a similar response to the one I gave her.

My son Oliver has had some issues with anxiety around unexpected changes in the school routine this fall: one hour delays, early closures, the ever-looming possibility of snow days, all have thrown his personal space-time continuum into disarray. It’s been a stressful time for him and for those that support him.

Monday was a particularly stressful day, with a combination of a one hour delay plus our car being in the shop, meaning we had to take the city bus to school. Oliver held it together pretty well until he got to school; once there, though, the bottled up stress of the exceptional day spilled out.

His experienced, insightful educational assistant guided Oliver toward capturing his feelings on paper, and this led them to a long discussion about anxiety and routine and ways of dealing with it, an exercise that included developing some helpful cards: 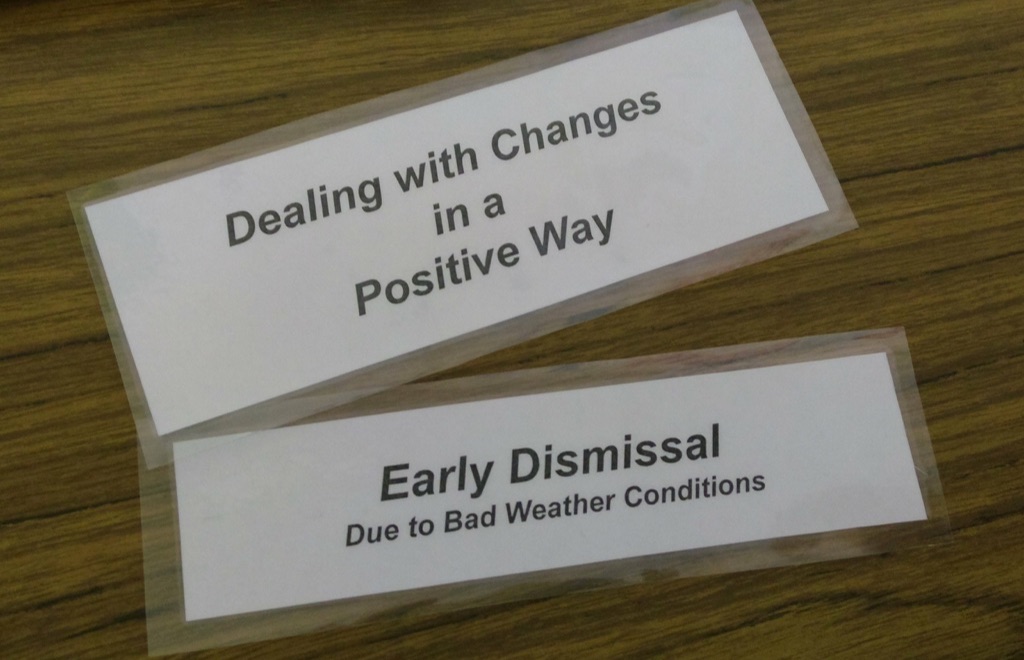 Today happened to be another exceptional school day: only an hour after I dropped Oliver off at school, it was announced that schools would be closing 2 hours early. I immediately jumped on my phone and had a quick back and forth with the school, and we decided to play it by ear: if Oliver reacted badly to the news, I’d come right up and get him; if he was okay, we’d wait until 12:30 p.m.

What happened next was simply wonderful: Oliver was able to communicate that he was anxious about the early closure, and that if he stayed longer at school he’d likely get more anxious, and probably angry. He decided it was a good idea for me to come and pick him up right away. And so I did. And when I arrived at the school he was happy, calm, and ready to come home.

This might seem like a small thing, but it’s not: it was a huge leap, that took a lot for Oliver to achieve, and a lot of effort by his educators to help him toward. I’m so proud of him, and so thankful for them.

PISA testing – or really any sort of standardized testing – doesn’t measure this kind of victory, nor does it measure anything about the individual strengths, weaknesses, challenges and opportunities of students in any way that’s particularly meaningful to the individual and their support networks, whether they be typical or atypical learners, included in the PISA testing or excluded.

So my honest answer to “what did you think of the PISA results?” is “nothing at all,” for they don’t measure things that are of any importance to me.

Much of the rhetoric surrounding the release of the PISA results used the language of sports — “We are statistically sound on the results and the outcomes and continue to be extremely proud, and we need to start celebrating and acknowledging our successes as a province and standing proud that we’re competing with the best”, said the Minister of Education, Early Learning and Culture in the House yesterday in response to the Kazakhstan question.

I don’t think of learning as a competition, and, indeed, whereas others will invoke the “demands of the digital economy” as justification for increased competitive metrics, I see in the digital economy the possibility of redoubling our efforts to recognize that we can approach each learner as an individual, not as members of a competitive learning team flying the flag for PEI.

Whether a learner is freaked out by snow days, interested in space travel, learns better in the woods than the classroom, or doesn’t really wake up until noon, we are far more likely to nurture successful, prosperous citizens if we step away from the recent focus on measuring community health and, instead, confront each learner on their own terms.

Gerry Hopkirk weighs in with his own thoughts in The Guardian today.