After a slow start, the snow has come to Charlottetown in droves over the past several weeks. By some miracle, we’ve managed to keep our car shoveled out and driveable, in no small part due to the generosity of mysterious forces that have conspired to blow out the space between the road and the sidewalk that gets packed tight with snow from the plows (whoever you are: thank you). 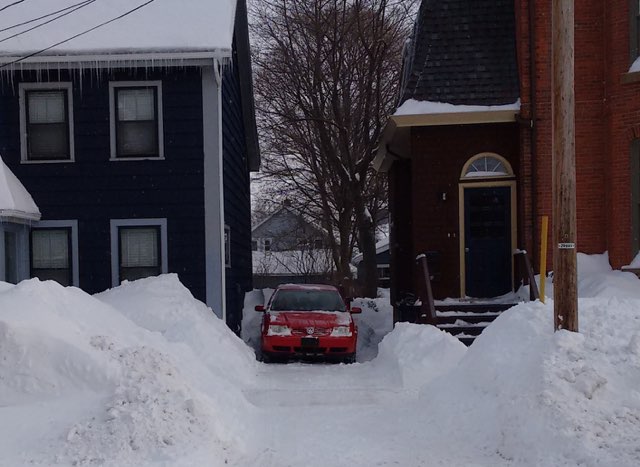 Our car – now 15 years old – still starts on all but the coldest of cold mornings. But in the last storm the wind snow and rain and temperature combined to deposit solid blocks of ice in the space in front of the front doors, meaning they don’t open completely and thus require the driver to execute a complex limbo-like manoeuvre to enter the car.

To solve this issue, at least for now, I’ve given the car a day off: after running Oliver to school and Catherine to an appointment, I drove down to the Delta Prince Edward and left the car in the underground heated garage for the day. The Jetta breathed a satisfying sigh of relief as soon as it was hit by the warm underground air: I’m looking forward to returning in 8 hours time to pick up a refreshed car with openable doors.