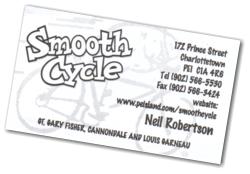 I am intimidated by bike guys. Not biker guys but bike guys — the hyper-athletic cycle-riding guys with special pants and glasses and titanium water bottles and bicycles made of space-age alloys discovered on Mars.


It is in this climate of fear, or rather despite it, that last year I decided that I should buy a bicycle. Being mostly sedentary, I figured it was time that I got that 15 minutes a day of activity I’m supposed to get so as to avoid early death, etc. and cycling, because it’s the one physical activity I loved as a child, seemed like a fit.


It took me a year to go from that decision to the actual purchase.


My problem was that the logical place to purchase said bicycle was at Smooth Cycle. They are at 172 Prince Street. I am at 100 Prince Street. We are neighbours. They are a downtown business. I had a gut feeling that buying from them, in the end, would be a much better choice than the other prominent one, which was buying from Canadian Tire.


And this was a problem because Smooth Cycle, which I walk by almost every day, seems to positively ooze the bike guy ethos. Look at their website: “Why buy from us?” they ask, “Because we’re racers and riders and we know our stuff.” That’s a very bike guy kind of thing to say.


They website continues: “Smooth Cycle is run by a team which includes competing mountain bikers, triathletes, runners, canoeists, snow boarders, and X-Country skiers.” I wish that some of my best friends where triathletes, but alas this is not the case. I don’t even know what a “X-Country skier” is, but it sounds like it involves jumping off cliffs.


Finally, however, with a sedentary summer fully in swing, I had to act. Using wee Oliver as a diversionary tactic, I ambled in, trying to look bike guy, late last week. Much as I suspected, there were shadowy figures whispering through the store dripping with derailleurs. I almost bolted. Then one of them emerged. I stated my case. He showed me a bike — a GT Palomar — and told me that was the bike for me. $349.99. Fire-engine red. He talked about brakes and frames and studly tires. I told him I’d be back to take a test drive.


Nice as that one bike guy was, I almost didn’t return. But, somehow, I plucked up my courage, and on Saturday I set off from home for a test drive. Back into the derailleur breach I went. Different bike guy this time. Another nice guy. I told him I was there for a test drive. He handed me the bike, asked me if I wanted a helmet. And off I went. No need to leave the keys to my car, or my driver’s license, or a $700 cash bond. I just went. This was a good sign: the bike guys trusted me.


And so around I drove. I enjoyed myself. The bike felt good. I thought to myself “could I actually buy this?” Myself thought maybe I could. So I returned to my new trusting bike guy friend and simply said “I’ll take it.” This seemed to surprise him. Perhaps I was supposed to be more tentative? Perhaps I should have asked about the torque converter ratio or something. Then he said “that’s great.” And off we went. Bought the helmet (20% off — nice). Bought a lock (20% off — nice). Found that three years free service are included in the price (very nice). Bike Guy took the new bike into the back shop and worked some last minute tune-up magic on it.


And so now I own a bike. I am not a bike guy. I probably never will be (although after two casual jaunts around town in heavy jeans I understand about the special shorts). But I had a thoroughly enjoyable experience buying the bike, and would highly recommend Smooth Cycle to anyone who’s in the market.