It’s been a stormy day here in Prince Edward Island, most especially on the western end. We had a PEI Home and School Federation board meeting scheduled for this evening, but the bad weather put having a quorum at risk.

So we looked to Skype to pull the meeting off.

We tried this on a smaller scale last year for a subcommittee meeting, and it worked relatively well, and since that time Skype has made “Group Video Chat” free for all users (it was a paid subscription service until recently), so it seemed like a viable option. But we’d also tried to Skype a single director into a meeting earlier this year, and he got lost in the shuffle, so I was cautious.

In the end we had 12 of our directors who could make the meeting: 4 attended in person, in the board room at Casa Mia Café (generously donated to the cause at the last minute) and 8 people attended via Skype.

Of those eight, we called one person on the phone (with Skype), and one person was on an iPad, which only supports audio for group chat, so we had 6 people with video and audio, and 2 people with only audio.

The Casa Mia board room has a large 1080p Sony television mounted on the wall at one end of a board table; here’s what it looked like when I was testing the setup with Catherine and Oliver via Skype: 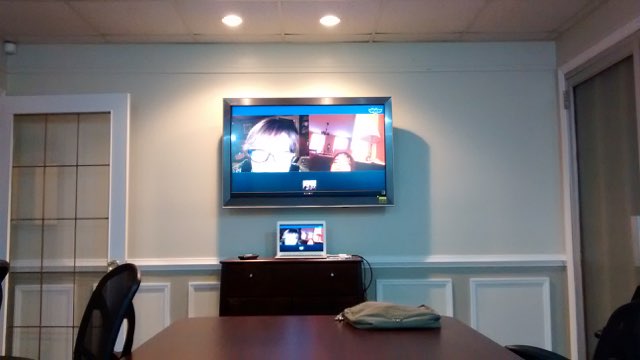 I used my MacBook Air, plugged into the TV via a VGA connector, to display Skype, and used the MacBook’s internal microphone to pick up sound in the room (arguably the weak link in the system, as it was sometimes difficult for Skypers to here people in the room).

We held the meeting, which took about 90 minutes, and every one stuck in and it went, for most intents and purposes, like a regular board meeting.

It all worked well enough that we might consider making the option a regular part of our board meeting routine.

At work, I bought a good microphone to fix the sound quality issues.

Of course, you also need to understand how to use it, and configure your software to actually use it. But, once you have that, you have most excellent sound (in FaceTime, GoToMeeting, Hangouts).

The acoustics of the room that you're in also greatly affects how well the software deals with speech. The more echo there is, the worse the sound output will be. (The software actively tries to filter out background noise, but with a lot of echo, sometimes also filters out speech).

Considering the cost of having an 8-person meeting, I don't see it as a big expense to buy a good microphone to ensure it's a meeting where everyone is easily understood.