For the longest time our summertime routine, when we’re headed out for a night at the drive-in movies, is to go out early and have supper at The Lobster Claw in Brackley Beach.

The first time we went there, likely about 12 years ago, at the end of our meal they brought around the dessert tray and went through our choices: “apple pie, cherry pie, apple crisp, cheesecake, sex in a pan…” As is my wont I immediately blushed upon hearing the last option. I had no idea what our waitress was talking about, and thought perhaps that I had fallen victim to some bizarre Island mating ritual.

It turns out that Sex in a Pan is this: 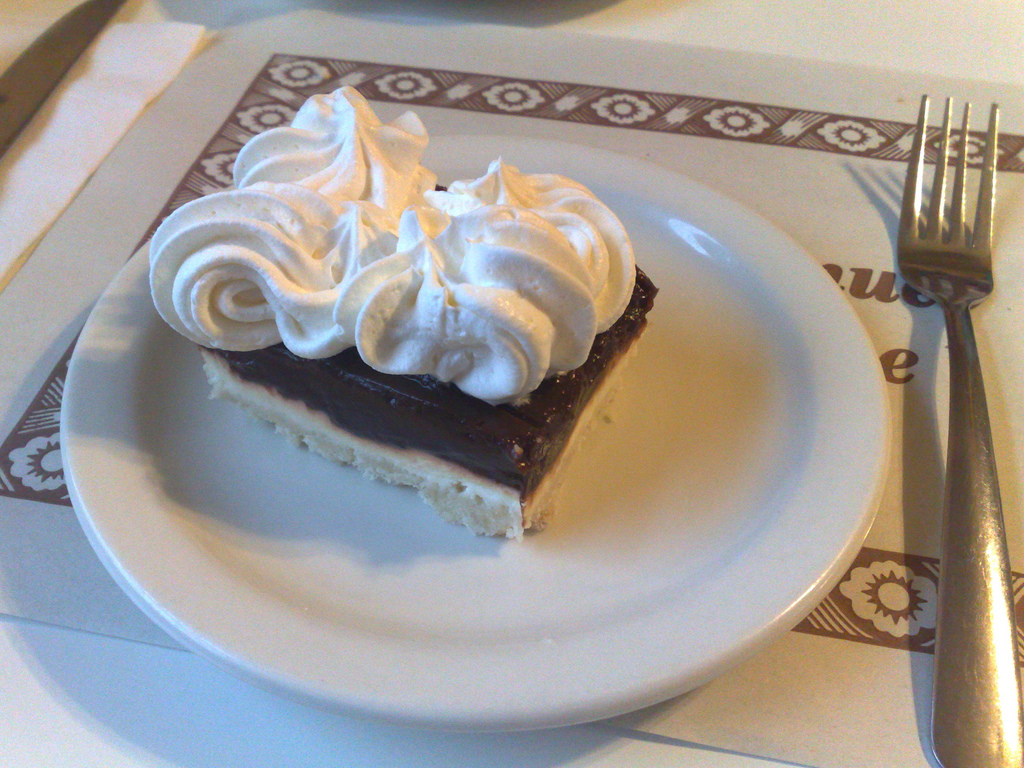 On that first night I managed to overcome my shock and actually order it. I’m not entirely sure what’s in it — various pudding-related products figure prominently, as does whipped cream — but it was very good, at least in a “remembering 1975 at the Carlisle United Church Turkey Supper” nostalgic kind of way.

So good, in fact, that we took to referring to The Lobster Claw as “Sex in a Pan.” As in “should we stop for sex in a pan before we go to the beach?” Or at least I started doing this.

Unfortunately every time we’ve been to the Claw since that fateful first day, Sex in a Pan has not been available: they’ve either been sold out, or it was just off the menu that week.

On Friday, however, having supper with Oliver before Indiana Jones, Sex in a Pan showed up on the dessert tray for the first time in a decade. I jumped at the chance. It was as dreamy as I remembered.

When our check came I noticed that Sex in a Pan is abbreviated SIAP, so if the notion of appearing to proposition your waitress makes you uncomfortable, I imagine that scrawling that on a napkin would wordlessly get you what you want.

Indiana Jones is on at Brackley Drive-in next weekend too, playing with Iron Man as the second show. Things get started around 9:00 p.m., leaving you plenty of time for Sex in a Pan before the show.

This is a great sweet but light dessert. My wife has been making this one for years and of course she took the recipe up to toronto when we moved up from the Island.

When we visit friends for potluck, she is always asked to make a dish.

Of course, because of the name, it is always good for a couple of chuckles as well.

If psychologists are right, they’ll get more orders for it and from seemingly unlikely people when they co-list it with Death by Chocolate.