By the fall of 1996 I had been working on the website of the Province of Prince Edward Island for over a year and we were well on the way to expanding the site from its tourism-information roots to becoming a comprehensive website about all of the various activities of the provincial government.

That November the first provincial general election was called since the website first went online in 1995 and so a meeting was arranged with Chief Electoral Officer Merrill Wigginton to discuss the possibility of posting election-related information on the site.

Merrill did not warmly embrace this opportunity – recall that these were early days not only for the web on PEI, but for the web itself, and he was justifiably suspicious – but, to his credit, he agreed to let us experiment, and so what quickly followed was a page of general electoral information along with a tool for finding your district and poll (this was before the days of Island-wide civic addressing, so the tool was a blunt instrument). 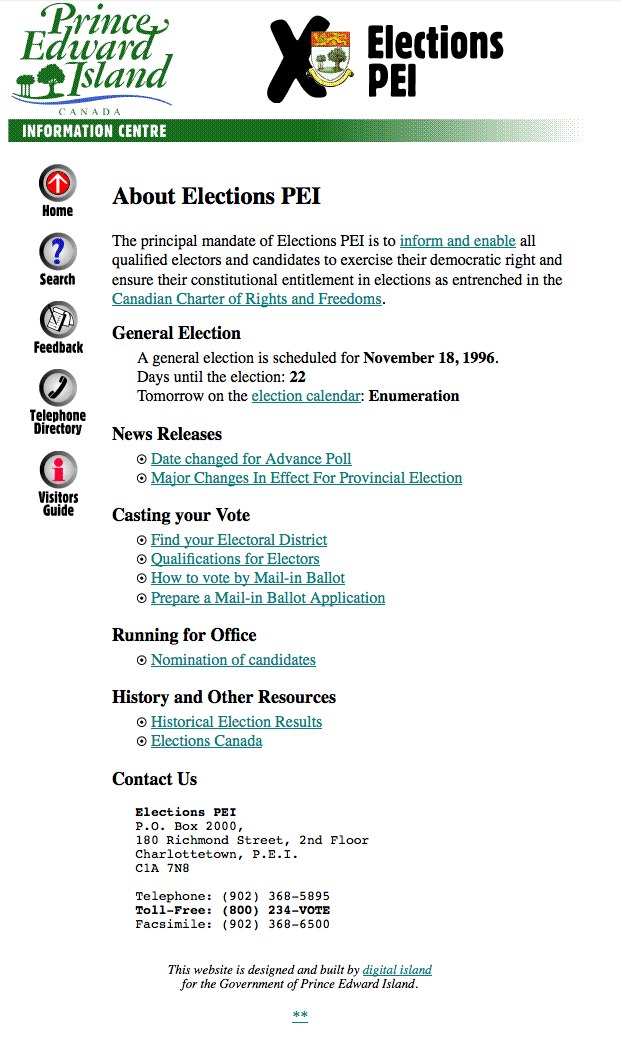 On election day, November 18, 1996, I was at “election central” in the Studio Theatre of the Confederation Centre of the Arts to take the results of the election and post them online. As befit my “temporary suspension of disbelief” status at the time, I was the last in line to receive the results: they were telephoned in from the districts to a bank of clerks who transcribed them onto sheets of paper, then handed to data entry clerks who entered the data into a PC-based results spreadsheet from which occasional reports were printed for distribution to the media, to the political parties and, eventually, to me. So the results posted online were not exactly “live,” more like “liveish.”

By the end of the night the Keith Milligan Liberals had fallen to the Pat Binns Progressive Conservatives. Not only had the government turned, but, as someone whose livelihood depended on maintaining the government’s website, so had my employer (to the credit of parties of both stripes, the website was a refreshingly non-political venue, and my position survived two turnovers of government). 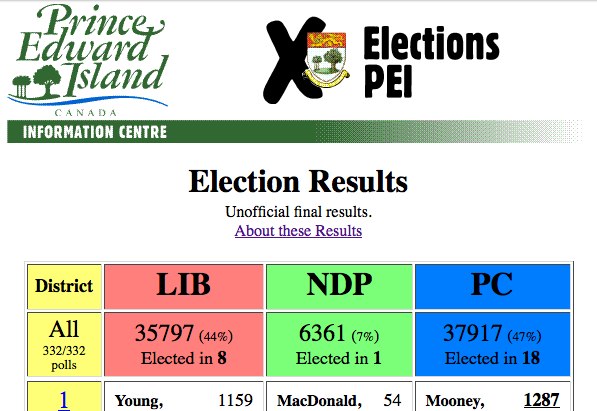 In the 17 years since that first election, I did the same thing for five provincial general elections in total – 1996, 2000, 2003, 2007 and 2011 – and saw the government swing back the other way, from the Pat Binns Conservations to the Robert Ghiz Liberals in the process.

After its initial skepticism, Elections PEI quickly warmed up to the Internet to the point where the route that election results followed on election night for subsquent elections was telephone-Internet-PC-printer-media. Indeed, eventually the media stayed home on election night and used the Internet instead, as we began to feed results directly to them and to Canadian Press.

Behind the scenes, additional embracing of web was happening too: for its public website, Elections PEI moved to its own domain name – from www.gov.pe.ca/election to www.electionspei.ca – and we worked with the office to add a rich set of historical resources, an enhanced civic-address-based electoral district finder, and more information about how and where to vote during election periods. 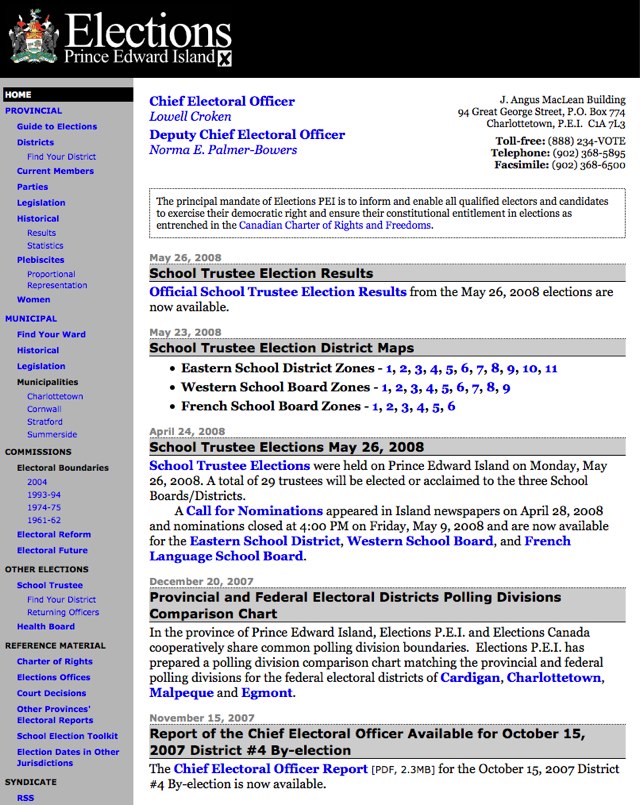 In more recent years I was joined in all of this work by my brother and Reinvented colleague Johnny who ably did his own fare share of Elections PEI website updating, Register of Electors training and support and election night data entry.

When the provincial Register of Electors was introduced – a permanent database of the name and address of every qualified elector – a system was required to manage the gathering and maintenance of the data. Merrill Wigginton, by this point a strong proponent of web technologies, sketched out a system for making a web-based system to do this, and we built the system to his spec, using it for the first time in the 2003 election. (It’s worth noting that this and every single piece of software we wrote for Elections PEI used open source software exclusively: Apache, Perl, PHP, MySQL and a host of other applications and utilities from the open source community). 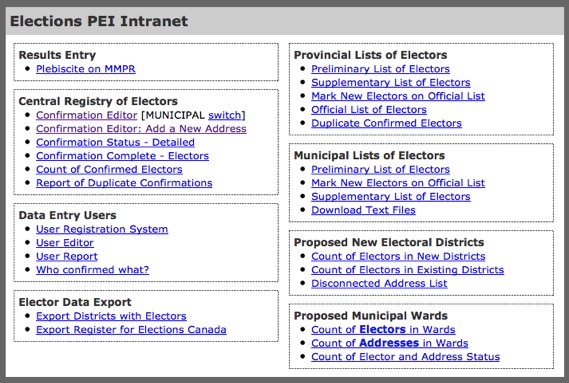 By the summer of 2003 I was winding down my work on the provincial website – the way I’ve always explained this was that there came I time when I had to either manage or be managed and I wasn’t comfortable with either prospect – but I agreed to stay on under contract to continue to manage Elections PEI’s technology.

For me this was something predicated on two things:

First, it was work I enjoyed: being in the engine room of democracy is thrilling, and the technology challenges I faced (like “how do you make a web system that won’t crash when 97,180 people try to look up the election results at the same time on election night”) were compelling.

As much or more, however, was that I enjoyed working with the people of Elections PEI: over 17 years I worked closely with Merrill Wigginton, Lowell Croken, Norma Palmer and Judy Richard, and a host of temporary workers and returning officers during election periods, and they were universally kind, smart, witty people with a passion for democracy and logistics both.

No more so were both factors – good challenges and good people – in evidence as on election day in 2003 when, as I detailed here at the time, a hurricane struck the Island the night before the election; everyone pulled together, though, and the election was held, people voted and everything worked as it should. That experience cemented a lot of work relationships and was no small part of my agreeing to stay on as part of the Elections PEI operation.

And that’s how, for the past decade, I continued to work with Elections PEI on its technology infrastructure.

The Register of Electors system became more sophisticated for the 2007 provincial general election: it was used to create “Confirmation Forms” for every civic address in the province, 60,000+ printed forms that were created by merging data from the Register with PDF files. After the door-to-door confirmation process where this information was cross-checked against the situation on the ground, these forms were then reassembled and we gathered with a team of 100 public servants in the Shaw, Sullivan and Jones buildings to have the database updated. We repeated the process in 2011, and for two rounds of municipal elections and a few byelections along the way.

The system that allowed all that to happen is one of the creations of which I am most proud: it had to work – the Election Act said so – and, as it was being used to create the Official List of Electors, it had to work well. We have some amazing administrative assistants in the provincial public service, and it’s a testament to their skills that almost 100,000 names and addresses were updated in less than 48 hours for three elections in a row.

Somewhat miraculously, all of this – the election results system, Elections PEI’s website, and the Register of Electors – was hosted, for over a decade, on a pair of Dell PowerEdge 600SC servers located on the second floor of a two-floor vault at Elections PEI’s headquarters at 180 Richmond Street, a “server room” that made bona fide system administrators cringe every time they saw it, for it lacked both backup power and any air conditioning, and regularly got up to 30°C+ in the summer heat. But the servers – nicknamed wallis and edward – just kept on going and going and going. The edward server – it hosted the MySQL database server and the internal web services – had its fan die a few years ago, but we simply removed the cover to add additional cooling and it kept on going. 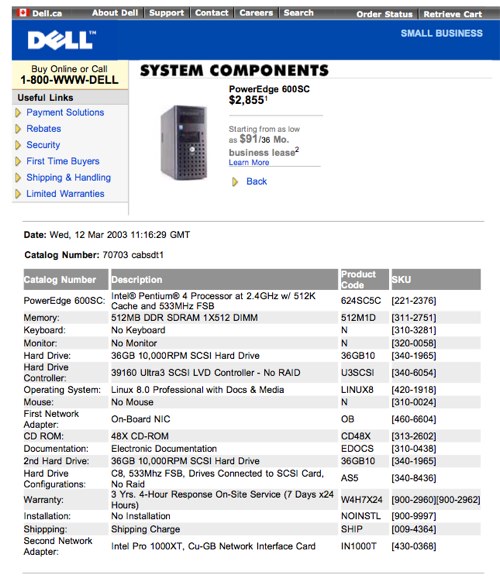 Early in 2012 two things appeared near in the horizon. First, edward and wallis needed to be replaced: servers don’t last forever, and those two were certain to have a hard drive or power supply go eventually. Second, Lowell Croken and Norma Palmer, Chief and Deputy Chief since 2005, announced they were going to retire before the year was out.

Working with Elections PEI we began talking with the province’s IT Shared Services group about purchasing new servers, and this evolved into a conversation about taking over maintenance and administration of the technology itself.

My 17 year working relationship with Elections PEI was an unusual and perhaps unique one; I knew that, for the long term, not only did edward and wallis need replacing, but I needed replacing too, so that the office could have a long-term, sustainable technology platform for the future. So, over the last year, along with Elections PEI, I’ve been planning for this migration.

Norma Palmer retired in mid-2012 and Lowell Croken retired in January of 2013; it took me and edward and wallis a little longer, but last month the switched got flipped and IT Shared Services took over administration of the Elections PEI website, the Register of Electors and the election results system, all now safely ensconced on modern hardware in an air-conditioned, fire-protected server room with a staff to oversee it.

I spent more than half of my professional life working with Elections PEI in one form or another; I honestly never stopped loving it. Democracy, especially when viewed from underneath the bonnet, where you see how hard everyone works to make sure everyone can exercise their franchise, is a lovely thing, and I was honoured to be given the opportunity to be so closely involved its logistics.

Best wishes to Norma and Lowell in their retirements, best wishes to new Chief Electoral Officer Gary McLeod and his Deputy Judy Richard, and hats off to the staff at IT Shared Services for a smooth migration. I’ll be thinking of you when you’re down in democracy’s engine room when the next election rolls around; for a change, all I’ll need to worry about on that day is voting.

An epic journey dear Peter — a job well done. Many thanks from a voter

Great story Peter. Keep enjoying what you do.

Thanks Peter for all your hard work and the importance is to our democracy on PEI.

Great work Peter. I worked with you, Merril and Lowell prior to the 2003 election printing the Confirmation of Elector forms and without your expertise, this wouldn’t have happened.