Last night while waiting for the bus uptown, I stopped in at Indigo to get out of the rain and browse around for a while. In the cookbook section I came across a couple of volumes from German publisher Gräfe & Unzer in a series they call “basics” and I ended up purchasing Vegetarian Basics, which turned out to be on sale for about $10.

The design of the books is beautiful: they’re full of colourful photographs of sexy Germans making food (and photos of the sexy food itself), the writing is witty and the recipes simple. They are less “cookbooks” and more “cooking manuals” but without any hint of the prostration required for the “…for Dummies” books. 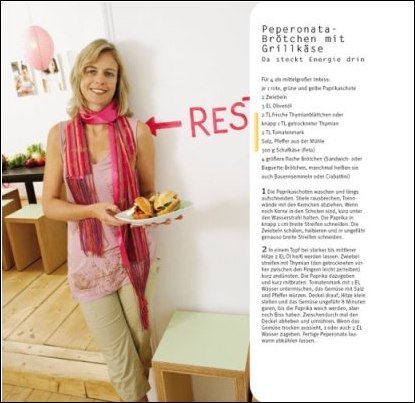 It turns out that Sebastian Dickhaut, who conceived of the basics series, has a weblog which, although it’s in German (Google’s English translation thereof), is worthwhile reading if you don’t read German for the beautiful photos of food you’ll find there.

There’s more about Sebastian on his personal website; here’s a poorly-translated (by Google) partial biography:

Born I am 1963 in bath Nauheim in Hessen. My father had bought an old hotel before there, had made from this a psychiatric sanatorium and had finally married my nut/mother. At the beginning they still drove in the morning on the supermarket, in order to get food for the hospital kitchen, in which I was dearest during the day. Each noon met we there in a Glaskontor beside the enormous stove, in order to eat with the cooks and physicians to noon.

There are plenty of copies of Vegetarian Basics left at the Charlottetown Indigo, and many copies of the meat- and fish-included Cooking Basics too (which is bound in resplendent yellow). They’re all piled on a table in front of the faux fireplace on the right-hand side of the store.

Does this mean you’ll be doing some cooking?

The level of trust you get when you find that the writter of a book does have a blog is amazing. The connection is much more powerful and if he had (I don’t know) other books you would certainly more available to buy them.

I rented an apartment in London last summer. The only classified listing on Craigslist London that had a blog link was the one I choose. The guy was renting his apartment for the summer and decided to post about it.