This morning Oliver and Catherine headed out early to the Museu da Quinta de Santiago, just 5 minutes from our house here in Leça da Palmeira. This being International Museum Day, the museum was unveiling its new audio guide, and Catherine and Oliver had the privilege of being the first users. 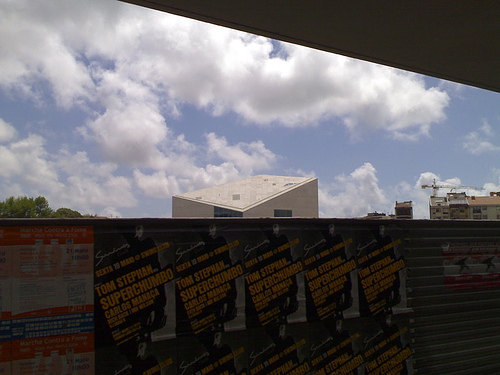 Once there we hopped on the 201 bus and headed towards the ocean, getting off about a mile later near the Fundação de Serralves, our destination.

Fundação de Serralves is a veritable museum-, art-, and park-lovers paradise: the sprawling verdant grounds house the Museu Serralves (a museum of contemporary art designed by Alvaro Siza — see my post about visiting the tea house he designed), Parque Serralves (home to a rose garden, scented garden, working farm and innumerable other delights), and Casa Serralves (an historic home, and extension of the museum).

Like the Casa de Chá Boa-Nova, Siza’s museum building feels like part of the landscape; this is not “big dick architecture,” but something rather more heartfelt and organic (although still monumental and awe-inspiring). In many ways Siza could be considered a sort of antithesis to Frank Gehry. 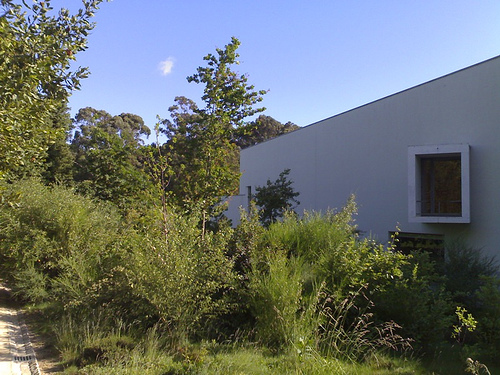 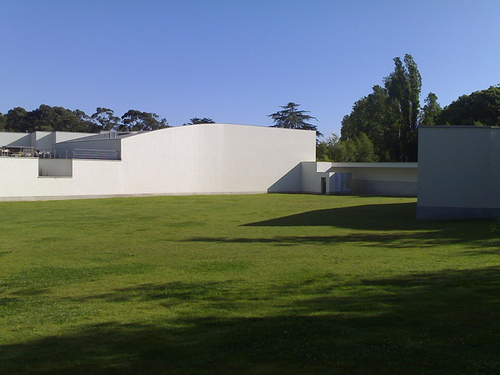 Having forgotten to eat lunch and thus being somewhat catatonic (see 2005), we began our visit with a trip to the fourth-floor cafeteria (although because of the nature of the building, the effect is more “second floor” than fourth) and had a tasty meal of pasta, sandwich and drinks.

Next we conducted a whirlwind tour of the contemporary art; nothing hit me over the head with a rake, but it was all interesting, and Oliver was especially impressed by a room full of paintings all of which incorporated the letter ‘T’ somehow.

After the museum, we headed down the entire length of the property towards what was promised as a “working farm.” In turn this took us past a rose garden, through a towering forest, past a tea house hidden in the woods, through a huge garden of scented plants and finally to an intriguing collection of stone farm buildings surrounded by an organic vegetable garden in full bloom. In one of the buildings we found some very, very long-horned cattle, some rabbits, a horse, some ducks, a turkey and a pheasant. It was all very bucolic. And thus a rather unusual part of a contemporary art museum. 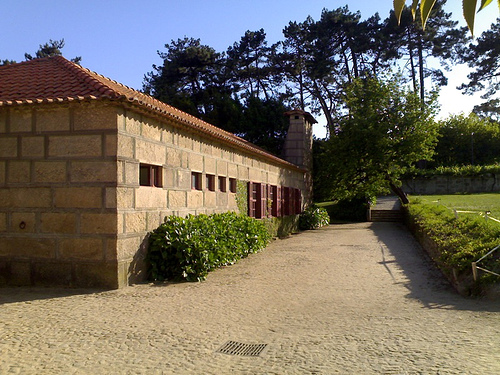 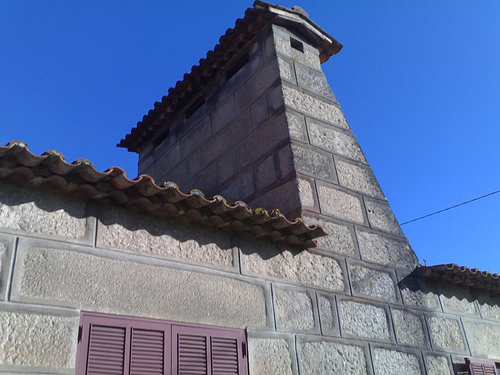 The 7:00 p.m. closing time drawing nearer, we dashed up the spine of the park, through the rose garden, and made it to the front entrance just as things were winding down for the day.

We thought we would have plenty of time to spare, but as it turns out we’ll have to plan another visit to be able to see it all — we skipped half the grounds, and the entire Casa Serralves. I can’t think of a better way to have celebrated International Museum Day, though.

Catherine decided to take advantage of the early opening date for the Da Vinci Code movie here in Portugal (it opened here today, one day in advance of the U.S. and Canada), so she headed off to the multiplex at Norteshopping via bus and metro while Oliver and I hopped on the handy 502 bus that took us right back to the Mercado metro station, passing through the north end of Porto, by the ocean, and through Matosinhos on the way.

Oliver and I enjoyed a dinner of leftover pasta, codfish cakes and potatoes, read Pinocchio in Portuguese, and had some chocolate cake before dinner.

Who knows what we’ll do tomorrow.

International Museum Day! Take that Marinetti, you lousy Futurist! (pal of Mussolini, wrote in his manifesto “We will destroy the museums”)