I my process of getting my Golding Jobber No. 8 letterpress up and running I’ve had a lot of help from Gota in Sweden who has the same press. She connected me with Stephen O. Saxe in White Plains, New York, who has written a history of the Golding company and could, she told me, tell me the age of the press if I provided the serial number.

I learned here that to find the serial number on Golding presses is located “top center of the bed of the press, just under the rim of the ink disk,” or right here: 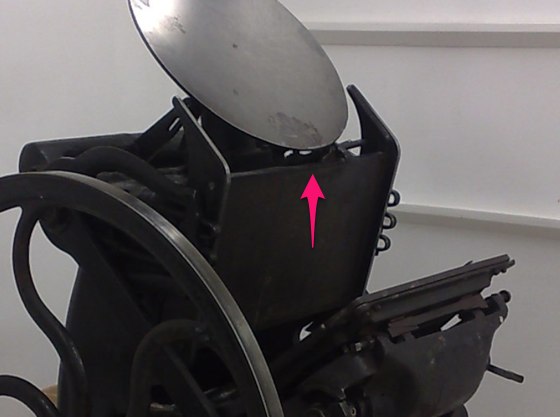 Try as I might, I couldn’t see any evidence of a number there. Then I read on: “it may require some kerosene and steel wool and a flashlight to make it visible, but it’s there.” And, sure enough, after about 20 minutes of scraping off years and years of ink and dirt, and with the help of a little acetone, here’s what I found:

I emailed the number — 1786 — to Stephen O. Saxe, and just received work back from him:

So my press is 97 years old this year.