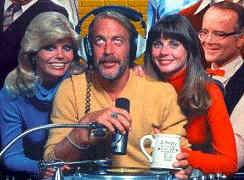 Here’s something I’ve never understood: a lot of sitcoms start off life with well-crafted, witty, clever opening credit sequences. Think of Spin City with its spinning manhole cover, or Ellen with it’s “we’re too good for credits,” or The Drew Carey Show with its Cleveland Rocks musical number.


Inevitably though, after a season or two, they almost all revert to the standard “theme song played over a montage of old episode highlights” style credits.


Is there evidence to suggest that viewers are more likely to stick around for a new episode if reminded of the wacky hijinks of episodes gone by?


The saddest example of this phenomenon is the change in the WKRP in Cincinnati opening, which started off with the classic “tuning the AM radio dial” sequence, and then took a sad slide into the standard montage.


I welcome the theories or explanations of others wiser than I…

Before commenting I have to say I had a weird moment reading my RSS headlines. I read a lot of political blogs so to see “the senator, wihle intoxicated..” in the title made me think ‘oh man, which one now?’ then I caught the WKRP reference and smiled.

As for cartoon opening credits, I think it might just be that people get bored of them, hence the totally abridged Simpsons opening we see most of the time. (the fact that they still use the same opening from 1989 and it still fits with the quality of the rest of the show is a testament to how good their animators are.) I don’t watch many sitcoms at all, but from memory I find most of them tend to go towards a title flashed on the screen but just starting right into the show (seinfeld doing away with the stand-up bits, roseanne, etc.)

The best Drew Carey show opening was the white background cartoon with the drawing of drew singing “moon over parma”.

Mostly the changing of the opening theme probably just reflects a producer wanting to fiddle.

I believe the exact quote is “The senator, while inisiting he was not intoxicated, could not explain his nudity…”

I think the switch was done to get more commercials in, where the average show running time went from 28 - 25 - even sometimes 19 minutes.