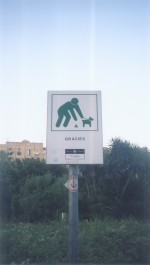 Earlier this week I mused about who in Charlottetown could provide us with digital scans of film we’d shot in Spain. We settled, based on price and speed alone, on Wal-Mart.


While they did a bang-up job on developing our APS film (I recommend the matte finish with white borders: the result is very snappy prints), their scans suffered from a band of light running across most of the prints. You can see an example of the problem in the photo here (one of my ever-expanding collection of “please clean up after your dog” photos, this one shot in the park across the street from La Sagranda Familia in Barcelona).


Oddly, when we took the Picture CDs out to Wal-Mart to have them take a look at the problem, they had no facility to look at the digital pictures there, so they had to take our word for it.


As we had over 200 photos scanned onto CD, we could see an obvious pattern with this, and as the prints themselves were okay, we knew it wasn’t a problem with our camera or with the developing.


To Wal-Mart’s credit, they refunded the entire cost of nine Picture CDs we had made. They didn’t seem to be able to offer any possibility of actually fixing the problem with their scanner. So I would be wary of having Picture CDs made at the Charlottetown Wal-Mart until they can offer some assurances that their problem has been fixed.

If you decide to D.Y.I., we have an HP S20 slide scanner that you’re welcome to borrow. It can handle negatives