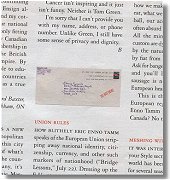 Way back in May when we visited New York City for the New Yorker Festival, I visited Fountain Pen Hospital and purchased a lovely Waterman Hemisphere fountain pen. My first formal act with this pen upon returning to the Island was to write a letter to Diana Symonds, Editor of Saturday Night magazine, complimenting her on the fact that the relaunched magazine doesn’t use jumps (i.e. “Continued on Page 45…”). Lo and behold, an image of the envelope I sent my letter in — with address penned with my new Waterman — appears in the middle of this week’s Saturday Night. My letter itself, oddly enough, wasn’t included. I wonder: what did the envelope do for the 3 months it lay dormant in their offices before this weekend?