(Warning: this really is a very sad story; don’t read it unless you’re prepared to be sad afterwards)

Seventy years ago this weekend, on the front page of the May 9, 1945 edition of The Charlottetown Guardian appeared what is perhaps the saddest story I’ve every read, under the headline “Sad Fatality Mars Day of Celebration” and concerning the death of 9 year old Charles Dalton Stewart in the VE Day parade in Charlottetown:

It’s impossible for me to conceive of the depth of grief that must come from losing a child, especially after living through the war, and on a day on which the rest of your community, province and country is lost in a reverie of joy over the war’s end.

With a haste that, contrasted with current practice, was impressive, the coroner’s inquest was, indeed, held that evening, and the following day’s newspaper contained the ruling:

A coroner’s jury, Inquiring last night Into the circumstances surrounding the death Tuesday afternoon of ten-year old Charles Stewart, brough in the following verdict: “We In find the the said Charles Stewart came to his death in the City of Charlottetown in Queen’s County. on Tuesday, May 8, 1945, by being run over by a motor truck, causing a fractured skull. No blame is attached to Mr. Lord, driver of the truck.

Dr. I. J. Yeo, coroner, presided at the inquest and the Attorney General was represented by Mr. G. R. Holmes.

Dr. I. Rachmel, who was the first witness, said he was called to the P. E. Island Hospital to examine the dead body of a boy. Found the boy had a multiple fracture of skull. There was no other signs of injury to the body. Pressure had been exerted on head from opposite sides and brain tissue had been squeezed out through mouth and other orifices of head. Death could have been caused by heavy wheel passing over head.

Fred McDougall, 320 Kent Street. said he was sitting on truck and felt a jar. Gordon Lord was driving. He was sitting in back with Leo Dowling. Charles Stewart was not on truck. The truck was going less than or mile an hour. Felt the jar when truck was between Frank Hennessey’s and Charlottetown Hotel.

Gordon Lord, 5 Spring Street, said he was driving truck with two others sitting beside him. Witness did not know Charles Stewart, until he saw him lying on the street. Witness felt a jar. He was driving very slowly, There were a lot of children clinging to running boards of truck.

Leo Dowling, 373 Kent Street, said he was sitting with Fred McDougall at back of truck on a car cushion. A few children were hanging on rear of truck and on sides. Witness felt a small bump. Saw Stewart boy lying on street behind and on right side of truck. Thought rear wheel went over him.

Sgt. Allan McInnis, City police, said he was told by an airman that a boy had been killed on Kent Street. Ran down to scene of tragedy, opposite A. A.. Hennessey’s. Found small boy face down on street in a pool of blood. Boy was still breathing and witness lifted the boy’s face out of blood to prevent him smothering. Blood was gushing from both nostrils. Witness thought boy was dead when ambulance arrived few minutes later. Witness said truck was moving very slowly as it was impossible to go faster on account of large crowds of people. Did not know who boy was until brother came up before ambulance left and said, “This Is my little brother.”

Fred McKenzie, 278 Fitzroy Street, said he had one foot on side of truck and was hanging on. Stewart was on other side trying to get on. Witness did not see Stewart fall but saw rear wheel pass over him.

Albert Vincent, 247 Grafton Street said he was on truck with Leo Dowling. Had got on when truck left Victoria Park. Witness was told by driver to try to stop the kids from pulling off Hitler’s boots (truck was carrying an effigy of Hitler). Lot of young lads hanging on truck. Witness felt rear right wheel raise up near CFCY, Witness got off when truck stopped. An airman and a sailor grabbed witness’ hands and formed a ring around Stewart to prevent people crowding prostrate body. Witness wanted to give himair. Witness said it was impossible to get kids off the sides of truck. They would not listen.

Rankine McLaine said he owned the truck. It was of 6000 pounds capacity and had never been out before. There was no body on truck. Gordon Lord was a reliable and careful driver, witness said. 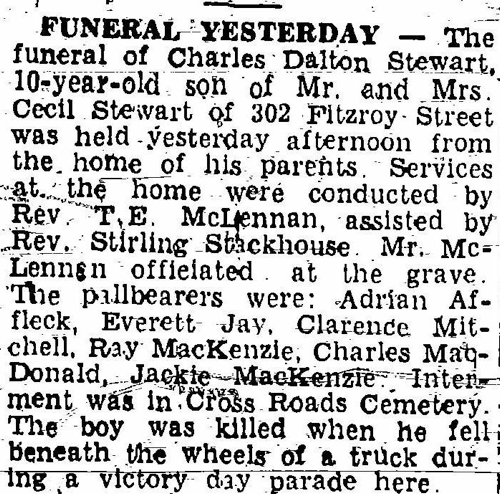 Cross Roads Cemetery is located across the bridge from Charlottetown behind Cross Roads Christian Church. Stewart is buried there, under a headstone featuring a lamb, beside his parents Cecil and Laura who died in 1977 and 1965 respectively: 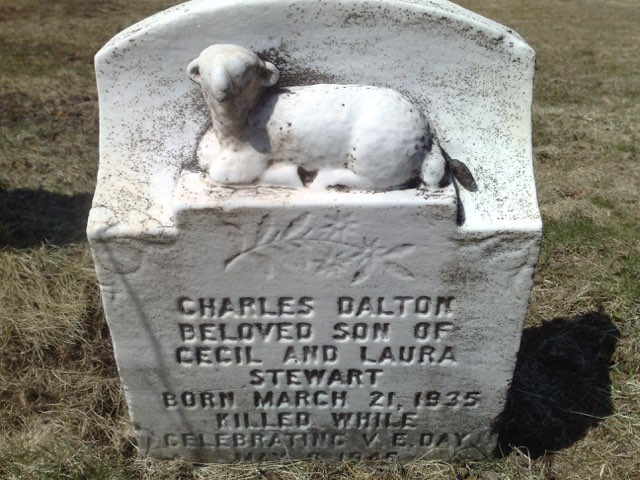